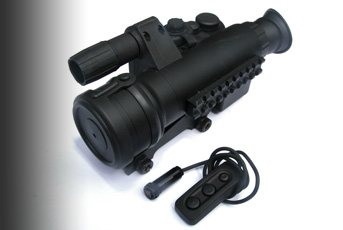 Pete Wadeson tests the Pulsar Sentinel Gen 1 GS 2 X 50 NV scope, a familiar face in some ways but new in others

It’s been over two years since I tested a nightvision (NV) scope with the name Sentinel. Outwardly the Pulsar Sentinel Gen 1 GS 2 X 50 seems similar to the original, internally a lot has changed. Pulsar is a new brand name created for the latest mid to high-end models of NV units produced by Yukon Advanced Optics. The same company who manufactured the earlier Sentinel. They’re rated as being higher specification as certain models such as the ‘GS’ (Generation Super) uses a CF-Super image intensifier tube that gives a noticeably better sight picture than a usual Gen 1 design. Let’s just say they reputedly offer the highest image resolution in this price bracket.

Initial impressions are of a compact, light yet tough design as the body is Titanium. Measuring 10 X 3 ½ X 4” in height from the bottom of the Weaver mount to the top of the onboard IR illuminator the Sentinel weighs 35.2ozs. Power is from 2 X AA Alkaline batteries and all the main controls including turrets are found on the right hand side. A major bonus when operating in the complete dark! Though not stated I’d guess click values are ¼” @ 100-yds.

The scope is switched on by a lever you pull back to a central position then fully rearward to engage the onboard IR illuminator. This is set slightly forward and above the rheostat and forward of this positioned underneath the IR is the main focus. Directly below is a raised pressure switch that controls the colour of the reticule, with a choice of red or yellow.

There’s no denying the x2 mag is low, but there is an optional x1.7 lens converter that can be screwed onto the objective to up the power. However, as this unit is perhaps best suited to 12ft lb airgun use then the spec is realistic and you soon become accustomed to it. The bonus however, is the clear/crisp image. Unless using an additional IR torch you won’t have the observation distance many crave but what you do get is clarity and definition.

This is something we’ve not seen on NV units before as the usual grainy green view is now replaced by a screen’ that’s a flat full green colour that benefits when used with an IR source.

In real time use with the onboard IR on, in relatively fresh cut grass fields those dark blobs were clearly identified as rabbits out to 80-yards depending on ambient light. However, the unit’s long Weaver rail on the left of the body allows you to add an IR torch of your choice. Using the lowest power model I could easily make out rabbits under hedge lines against dark backgrounds of earth out to 70-75 yds and that’s some going given the price of the Sentinel…

Included is a carry case and a remote, which fits with Velcro pads to the stock as you want. It offers three settings – ON/OFF, IR operation and the third switch brings them all on together. My one question is; is the Pulsar Sentinel Gen 1 GS 2 X 50 a huge step forward from what has gone before? Personally, due to the clarity of the sight picture I have to say it is. As for those who may feel this a tad low in magnification then I say using a 12ft lb air rifle we shouldn’t be taking shots over 25-yards at night anyway. I’d fit the x1.7 converter to up the mag and add an additional IR source for ‘no light’ situations. There’s a 3 X 50 model due later in the year! If you are a responsible and knowledgeable user of Nightvision scopes for air rifle hunting the Pulsar Sentinel Gen 1 GS 2 X 50 does have genuine appeal and little competition. Considering you get a 3-year manufacturer warranty I’d say if you’re thinking of stepping into the dark world of air rifle NV use then this is a solid, reliable and high spec’ unit that will definitely serve you well.

Verdict – Effective and value for money