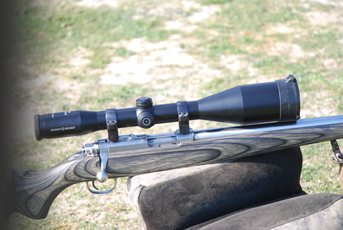 Fixed power scopes are not that popular in the UK, as we mainly tend to go for variables. I certainly do, as I like the ability to be able to dial up/down according to my need. But to be brutally honest; think for a moment what power you use to shoot most animals; I bet it’s around 7-9, given most are taken from some form of supported position – sticks, high seats or even vehicles. So something around that figure in a simpler package might be useful.

Most of my night shooting is on rabbits and hares is with my 17HMR Ruger All-Weather and in most cases I set the variable to x7 or 8, which is about right for low light work. So it occurred to me that something more dedicated might be the ticket. Being very much a fan of European glass, and also not spending any more money than I have to, Schmidt & Bender sprung to mind as they are by far the cheapest of the quality makes but with no loss of ability when compared to other market leaders.

So what better for night work than their 8x56 Klassik that is made in Hungary? This also brings the cost down as labour is cheaper, but not the quality as all components are supplied by Germany with the end result being identical.

The 8x56 has a 30mm body tube and its big objective bell sits easily on the Ruger in a set of their high rings, even with a Butler Creek lens cap fitted. A 1” tube version is also available, however this will place the optic nearer the barrel, so higher mounts are in order. Turrets are the old-style with the basic reticule, position indicator dial included. The drums are medium height, easy to dial and set under caps, as is proper for a hunting scope.

Click values are 1cm @ 100m, with 28 per turn (11”) with six, full rotations (66”) available. At the rear is a fast-focus eye piece, twilight factor is 21.1 and field of view (FOV) at 100 yards is 15 feet and apart from the superior lens quality and solid build that’s your lot. First impressions are a big optic as the Klassik is not short at 14.6” nor light at 22 oz. However, for my intended use that made no never mind.

Reticule choice covers nine options, from the three, tapered posts of the #1 to the Varmint grid of the #8. I went for the #7 which I consider to be the best, which shows thick posts at 3, 6 and 9 o’clock with a fine cross hair coming down from 12 o’clock. Subtension of this at 100 yards is just shy of the width of a fired, 12-bore case, as once zeroed I was using these as targets. Perhaps a tad coarse but easily visible and hard to lose in any light. Plus still a lot smaller than a rabbits head, so more than good enough.

My 17HMR is capable of ½” at 100 yards and the Schmidt did not change that, so after zeroing and a bit of fun with the 12-bore cases it was time to go out. Rabbits were thin on the ground that night, as I only got ten but the Klassik showed its quality with excellent low light performance with the longest shot out to 153 yards. Often as not, as the light was going, I would see a target which looked a bit dark and swing onto it. Once in the scope it was not only easier to see but also apparently brighter in terms of contrast.

For my rimfire needs, which are often from a truck or sitting in the back of one at night; the 8x56 proved a highly effective optic. Likewise if you do a lot of high seat work on deer, or shoot over longer distances; its medium/high power and large objective will allow good shots dawn to dusk.

The Schmidt & Bender 8x56 Klassik is a simple design whose high quality build and components combine to make what might be considered the ultimate, fixed power scope. This model is also offered in 6x42 and 10x42 versions.