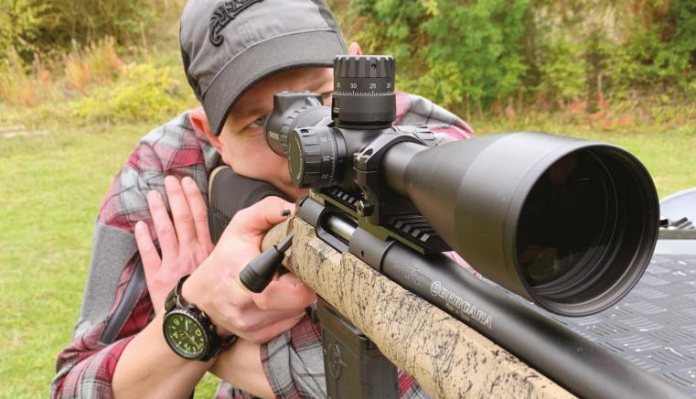 We are all aware that Swarovski manufacture some of the best hunting scopes in the world and pretty much have that area of the market sewn up! However, as the performance of rifles and calibres continues to grow, so have the distances that we push our rifles to. In March 2015 they launched the X5i, a model aimed at the longer range hunter. There were three versions to choose from; the 3.5- 18x50 P with ¼ MOA click values and the 5-25x56 P with either ¼ or ⅛ MOA clicks. With all my scopes now being metric, I was pleased to hear that there is a new version of the X5i with 0.5cm clicks, that’s 0.196” in English.

Being slightly different, Swarovski have created a bespoke multi-tool for the X5i. The polymer, ring-shaped design includes a hollow metal hexagonal key in the 12 O’clock position that also houses a removable T6 Torx key. The outer edge at the 3 and 9 O’clock shows coin openers, while there is also a grooved opening on each side that differ in size; I will explain their uses as I go.

The scope has a standard matt black finish, offers a magnification range of 5-25x and is built using a 30mm body tube with a 56mm objective. The glass needs no introduction, it boasts 90% light transmission and is of exceptional quality. There is an illumination control unit integral to the top of the eye piece, which includes a coin operated battery cover that houses a CR203 cell giving 260 hours of use. There are 10 brightness settings to cycle through using the rubber +/- buttons, and the latter doubles as an ON/OFF switch. I did notice that even on the highest setting the dot is not visible in daylight, which is not really a big issue, as illumination is only really required in more low light scenarios. Typically, there’s a memory that will return to the last setting selected automatically when it’s switched on again. The side-mounted parallax turret does not display specific distances, instead shows an interrupted graduating scale that covers 50m-∞. Its cap is grooved to match one side of the multi-tool and can be removed to expose a spare battery for the illumination, a nice touch!

Traditionally, in order to gain more elevation adjustment range; a manufacturer would use a larger diameter body tube, as it simply gives them more room to work with. However, this comes at a detriment to size and weight, both important factors when carrying it about! This goes some way to explaining the size of the elevation turret, which certainly stands out, as it sits 4cm above the main body tube and looks like the coning tower of a submarine! This version came with 0.5cm @ 100m click values, which allows for very precise adjustment down range, which I like, though they could be too precise for some. There was a total of 50cm of adjustment per rotation, with 10 clicks for every 5cm marked on the turret. They have added a rotation indicator window, leaving the user in no doubt where they are in elevation, which can be very useful. They have also included a subzero feature, this is a collar that is controlled by two slots either side of the turret. When lifted up, it allows the user to adjust below the zero stop and covers the window by displaying new markings going in the opposite direction.

Once zeroed at 100m, my tester provided 185cm/370-clicks of upward adjustment and 40cm/80-clicks of sub-zero adjustment, the latter seeming overly generous. Still, when combined with my rifle it would be capable of stretching out to 900m. I think that is more than enough for any hunting scenario! The windage turret is a much lower profile design, as it is simpler in nature. It is also marked in 5cm intervals, in both directions, which is a good move. Once zeroed, it provided 45cm/90 clicks in each direction.

Personalised extreme cams (PXC) are offered for the X5i. These are essentially bespoke turret caps that display distances rather than just click values. These are generated using specific ballistic data provided by the user, so that they no longer have to look at a drop sheet before making an adjustment. Simply range the target and dial the turret to the distance shown on the PXC, job done!

There are three different reticle choices available and they are all in the second focal plane (SFP). This means that the ret stays the same size throughout the magnification range, so that it can be clearly seen at all times. However, this does mean that the reticle subtensions are only accurate at maximum magnification. This can limit their use compared to a first focal plane ret, where the values stay the same at any magnification.

The options include the 4WXm-I+, which can be completely illuminated and features a floating cross aiming point with regular markings along the horizontal and the shortened vertical axis. It does not clutter the image and provides plenty of reference to the shooter. The most complex is the BRMm-I+, which is designed for the longer range shots, as it incorporates a fully illuminated crosshair with regular markings along both axis and a holdover grid in the 6 O’clock position. It allows the user to measure and adjust the point of impact quickly.

My tester came with the 4Wm-I+, a very simple hunting reticle showing no numerical values. It featured a 0.6cm illuminated dot at the centre with no markings along the vertical axis. The horizontal axis showed markings every 5cm with more significant markings for 25cm. I did find that Swarovski’s website includes information about their ballistic app and a free subtension dimension program. The software allows the user to see clearly what values the reticle shows at different distances and magnifi cation levels for any of the available scopes, turret values and reticle choices. The results can then be printed out for reference, a user-friendly system that allows the shooter to make the most of their scope.

I used Tier One rings to mount the scope to my rifle, as they include a built-in bubble level, which is a must for the long-range stuff. It was then a case of zeroing the X5i, using the multi-tool. This process is more complicated than most, as it essentially incorporates the setting of the zero stop at the same time. I removed the elevation turret cap by loosening its retaining screws. There is then a sprung collar underneath which is loosened in the same way. Having taken my first shot, I was able to adjust the vertical point of impact using a hex key slot on the top of the turret, which provides clear, audible clicks.

Once correct and confirmed with a group, the notches on the multi-tool are used to rotate the sprung collar to its stop and, while under pressure, I tightened up the screws and then replaced the turret cap. I didn’t need to remove the windage cap, I simply rotated it to adjust the point of impact, then loosened the retaining screws and returned it to the zero mark. They have created a video that explains the process, so I recommend watching that before attempting it!

I found the optical quality exactly as expected; brilliant, which is always a treat on any Swarovski optic. The scope made the most of this throughout the entire magnification range, with no compromise to the image or the reticle, which could be used at any mag. With this quality came clear advantages, especially at 600 and 1000 yards at Bisley, where there is not necessarily a clear/exact aiming point on the targets. I found the centre dot pin sharp and precise at these distances. My eyes remained relaxed, even at 25x, as I found the eye box and eye relief was particularly forgiving.

The parallax adjustment was spot on, and I found that I preferred it without distance markings, as it forced me to make sure that I adjusted correctly each time the distance changes, an important fundamental. During low-light use on the farm, the illuminated centre dot remained crisp with no blurring or flaring. The elevation turret was a real highlight too, as once setup it just works. It is clear, easy to use with firm, tactile and audible clicks. Tracking was spot on as expected; however, it is quite large. Once fitted to my chassis system, I couldn’t fit the rifle in the cabinet!

It is hard not to compare the X5i to tactical scopes, it is only when you put it next to a Schmidt & Bender PMII that you realise how much shorter and lighter the Swarovski is, and it then it begins to make sense as a hunting optic. I am glad there are reticle choices, as I would not choose the 4Wm-I+; it just does not provide enough information and the subtensions do not allow you to make the most of the 0.5cm clicks. Overall, it is an aesthetically pleasing, high quality and very capable design that does what it was designed to do so well, that I am left wondering just how good an FFP version would be!