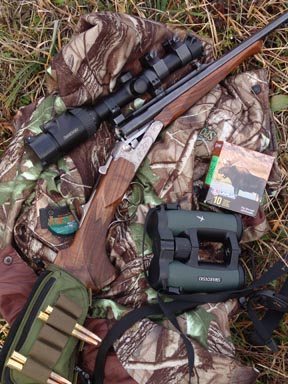 As I had been using the new Swarovski Z6i 2-12x50 for about a year on my 30-06 Mauser M 03, the chance of a wild boar hunt in Croatia last year allowed me to see what their 1-6x24 version could do. The real beauty of the Z6 is that it offers a more versatile magnification range, so allowing one model to be able to do a lot more. For example the 2-12x50 offers both long and short range abilities in one package.

The Z6i 1-6x24 EE (extended eye relief) arrived and went on a Krieghoff Classic double rifle in 9.3x74mm R purely for boar shooting. Given its spec the 1-6x24 is quite long at 12 ¾” and its 30mm body tube offers a one-piece build. The eyepiece bell shows the fast-focus system and the magnification ring has a rubber grip with a raised fin for easy manipulation. The rheostat is different and striking, as Swarovski has done away with the traditional rotary drum control. Essentially they have extended the top of the eyepiece bell, which is pleasingly faired into the build. At the front is the battery compartment, behind a single lever and either side are rubber covered pressure pads marked – (left side) and + (right).

At the rear are two images a moon (left) and a sun (right) these allow you to select either day or night settings. These differ in terms of intensity so it’s easier to adjust to the available lighting conditions.

With the lever in the middle it’s OFF, flipping it left or right selects the mode then to adjust the brightness press the +/- pads. Though doing an identical job as a normal rheostat I found it easier. Plus it has a memory, so if you switch it off it will return to the last setting when turned on. Typically it has a shut down function to save battery life. Equally useful is the spare CR 2032 battery kept in an optional, tall turret cap (included), as is a round key to open up the compartment.

Turrets are low, hunter-types under removable covers with the drums offering a lift/slip facility to get you to a 0 point. Click values, as befits a close range scope of this nature are 1.5 cms @ 100m or .54” @ 100 yards. Turrets are marked on top with both notations.

Clicks per turn are 52 with four, full rotations available in both windage and elevation, which works out as a generous top to bottom of 112” @ 100 yards. For some unknown reason the drums are not marked all the way round their circumference and I did find the fixed register point on the top of the threaded section a little small.

Optical quality was as ever superb, with a crisp picture right up to the periphery of the view. On that point the EE version gives an eye relief figure of 4.72” as opposed to the standard figure of 3.74”. This is done for heavy recoiling calibres so you don’t end up getting scoped when you fire. This distance does make a difference in terms of correct eye relief, so make sure that you know what you want when ordering the 1-6 series.

Reticule-wise the 1-6x24 offers three choices regardless of illumination:

#4 – three thick lines at 3, 6 and 9 o’clock with a fine centre cross extending up to 12 o’clock. The thicker bars go near the centre and cramp the view a little

On the illuminated (i) models there’s a central dot that lights up and nothing else.

I found the illumination system better than the standard rheostat drum of other types of lit reticule. With your brightness dialled in, a simple flick of the lever turns it on, which is great when moving from light to dark situations, or where you quickly need a highly visible aim point. My one niggle is the ease of which the lever can be operated, as a couple of times I put it in my gun slip only to find I had inadvertently turned it on.

Like all top end optics the Swarovski Z6 range is not cheap, but quality and ability never is and you are going to be paying around £800-900 for the non-illuminated versions, but that’s how it goes. Other options include a round body tube or the SR rail mount, frankly most Brits will opt for the former…

There’s little doubt the Z6 1-6x24 is an excellent scope for those wanting a woodland, driven and close/medium range optic and made even more so by the option of illumination. However, it’s reasonably specialised so make sure it’s what you need!