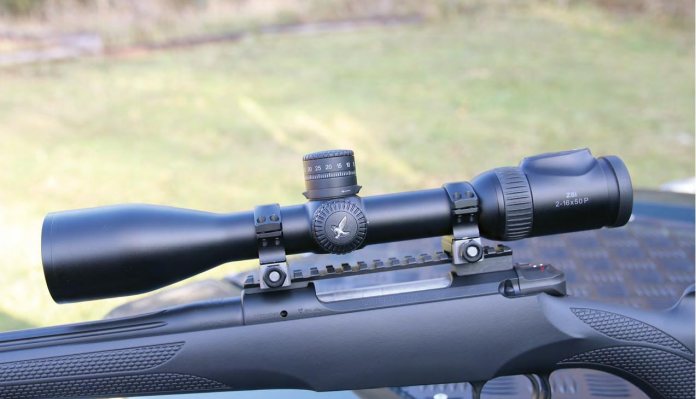 Swarovski’s introduction of the Z6 range of scopes near 10-years ago heralded a bit of a revolution in optical design, as it offered a six times zoom range! Effectively meaning that the specification was increased, so allowing one scope to offer more possibilities. The familiar zoom ranges of say a 3-9x42 etc gives a bottom end of x3 magnification and a top of x9, which has been perfectly adequate for years. But perhaps a little limited at both ends of its range.

Take Swarovski’s Z6i 1-7x10x42 with its six times zoom; as can be seen, gives you a decent high-end magnification, allowing you to shoot at distance, yet wind it down to just x1.7 for close in work. So rather than buying two scopes, this model pretty much offered it in one, which is just one from this range.

Some time later came their Z8i (illuminated) series, this concept used the same increased zoom range principle, but took it up to an eight times specification. Their Z8i 1.7-13.3 takes the useful Z6 1.7-10x42 double duty concept and adds more mag to the top end for even better longer distance performance, yet retains the low mag for chores such as driven hunting. I have tested this model in both roles and it was not found wanting!

There are four choices for the Z8i; 1-8x24, 1.7-13.3x42 P, 2-16x50 P and 2.3-18x56 P. These last three all offer the option of the Ballistic Turret Flex (BTF), which is an improved variant of the Z6i’s BT (ballistic turret) system that uses adjustable range rings. Clever is the fact the BTF clips on and off as required. This means Swarovski could just make one saddle/turret design and if you just want the superior build quality and optics and not a BDC scope, you don’t have to buy it! But if you do, it’s off the shelf.

The BTF package contains one turret, which simply replaces the cap and locks down automatically and is released by a central plunger. There’s also a ring that allows you to lock the setting in position. Also included is a removable range drum marked in 1cm clicks from 0 – 70, so you can work out your drops (in cms) and dial them in as required. But there’s more!

The range drum can be removed and replaced with four, marker rings (like the three of the Z6i BT system) so you can pre-set distances instead. This is quite effective; for example, on a 223 Rem you could zero at 200 yards (1” high) then set four further distances; 250, 300, 350 and 400 with the marker rings. In use; calculate the drops between these markers, so it’s quick to dial in a range by going to the nearest ring, then dial up or down the individual clicks for the intervening distance.

With the BTF fitted, the total adjustment range is reduced to 70 cms or one rotation! So, as we shall see next month; zeroing is accomplished without it fitted, so giving more correction movement.

Also included is a windage ring marked from 35 – 0 – 35, this gives a middle (0) position, so you can quickly input hold off for wind. Swarovski only include one Flex turret in the package, which will doubtless be used for range adjustment, you can of course buy another to have full windage/ elevation control. The reticle is in the second focal plane (SFP) in the following options; 4A-300-I and BRX-I (both ballistictypes), standard 4A-1 and the 4W-I (on test) with windage bars on the horizontal stadia. There are 10 per side divided into 5.8mm divisions with a longer stadia at #5, allowing you to physically aim off.

The Z8i 2-16x50 P is near the same recipe as my Z6i 2.5-15x56 P (BT). The eyepiece bell shows the newer, stream-lined and lower rheostat bulge with its twin (+/-) pressure pads on top and a 3-position lever at the rear. Middle - OFF, right – full power (day light) and left – low power (dark), the CR2 battery sits in the side focus drum left of the saddle. Illumination adjustment is seamless, just press to adjust. Only the centre dot is lit and subtends 0.9 cm @ 100m, nice! The light also switches off if you exceed horizontal and vertical angle limits too.

Turrets consist of an outer/lower dialling ring for zeroing with an inner/higher ring that connects with the BTF drum. These are capped from the box and only removed for zeroing or to connect the BTF. Clicks values are 1cm @ 100m with 76-clicks per rotation and two full turns available in both elevation and windage planes; so, a total adjustment range of 59.8”.

As usual, the lower turret ring is only marked for 15-clicks either way, which I have always found annoying. This section lifts to disengage, so it can be rotated to 0 once zeroed. One turret cap is taller than the other and contains a spare battery for the rheostat. On the left of the saddle is the side focus/parallax drum; always a bonus on longer range optics!

It goes without saying; optical quality and ability is excellent, which is why Swarovski is one the top European brands! I’ll have to wrap it up there for this month, but tune in again next issue, as I look at fitting and adjusting the BTF system and take it and the Z8i 2-16x50 P out in to the field to see what they can do.