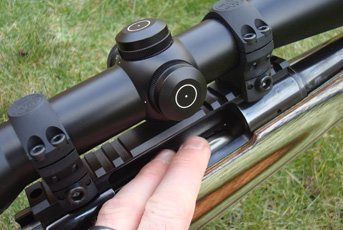 Weaver or Picatinny scope mounts are popular in the rifle world because they work well, align the scope correctly and usually offer a good return to zero should you remove it. The mounts offered by Third Eye Tactical are machined from 7075 T6 aluminium, which is of a higher quality, and hence pricier than the standard 6000 series alloys. The T6 heat treatment level gives the material very high tensile strength without suffering the weight penalties or corrosion problems associated with steel.

The rings are machined in one piece and more importantly, in a single operation. What gives them the edge in accuracy is that the company use advanced 5-axis machinery that negates the components having to be removed and repositioned, which can cause tolerances to slip. Each pair is numbered to reflect the precision level to which the tolerances are driven and matched. The sleek design has a relieved area where the upper and lower sections join to prevent crimping the scope’s body tube. Large metric fasteners are used throughout, which are stronger than smaller types so will reduce thread wear and eventual stripping, as well as giving more finesse when tightening down. The solid black anodising was flawless.

The one-piece, aluminium mounting rails are made for many rifles including Remington and Howa along with some of the more exotic actions including Stiller and Nesika. I bolted mine to a long action Remington 700 stalking rifle so chose a flat rail. If you want longer ranges and more elevation, then 10 and 20 MOA inclination models are available. As is the case with Weaver rings, they bolted straight on and everything lined up perfectly, the scope was easy to rotate into the correct vertical alignment and nipped up solid too.

I zeroed and tested the rifle and all was quietly normal. The rail, although one piece, was nicely scalloped out on its underside so offered plenty of access to the chamber and for loading. I decided to take the scope off and put it back on, it did return to zero, not something that was promised but a nice freebie. The rings, although not the slimmest design, did seem to strike a nice balance between size and solidity. Weight was not a problem, certainly in an area of such critical importance to rifle accuracy and consistency. The large scope/ring interface showed no signs at all of marking upon disassembly, so full marks there.

Whether it is for a hunting or target rifle, time and money spent on the right scope mounting system is so often neglected and regretted at a later date. These mounts, made in the heart of West Yorkshire are a fine example of solid, reliable precision engineering from a company who seem to have a lot to offer the shooter. Check out the video on Youtube, posted by Craig of a scope ring being machined from solid bar. http://www.youtube.com/watch?v=9Rscui45sGA