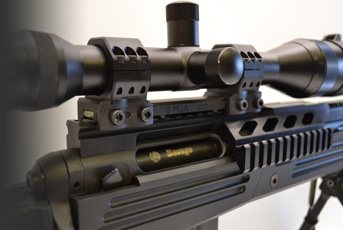 Third Eye Tactical is fast becoming a company who listen to shooters and provides what they ask for. So their latest product should appeal to those looking for an ultra-strong and stable scope mount, as they might just have what you need! Called the Unimount it’s a one-piece style but actually consists of three parts – base rail and two rings.

The base rail clamps at either end with two pairs of M5 Allen bolts and gives a long contact area. Backing this up are twin recoil lugs that slot into your Weaver/Picatinny rail to prevent slippage. The rings bolt to this and are wide and deep and secured by six M4 Allen screws per unit. With over 50mm of total mount/scope contact, I imagine you are getting the idea about strength and solidity.

It’s made from 7075 T6 aluminium, hard anodised in desert sand or black to give a tough and attractive finish. There are two lengths available to suit long or short body tubed scopes, likewise short and long action receiver/action lengths too. Typically the ring sets cater for all tube diameters; 1”, 30, 34 and 35mm. The bases offer a choice of angle for long range use with 0 (neutral), 10, 20, 30 & 40 MOA inclination options.

If that was not enough and integral to the rear of the base rail is a small integral spirit level bubble. This is positioned directly in front of the shooter and for those that take their rifle shooting seriously, will allow you to ensure you are firing from a level platform. It also has some form of luminous insert as it glows in the dark. The only thing I would say here is that to view it properly you do need to move your head back a little.

I fitted up the Unimount with my old 30mm bodied Swarovski long range precision scope with paralaxing objective on a Savage 10BA rifle. In use no surprises revealed themselves, which I very much expected, and like all well designed gear it did the job it was supposed to. Machining tolerances were tested by deliberately slackening one ring to encourage the scope to `relax` but no movement could be detected and the body tube remained unmarked.

This is a solid and well put together design that will suit the rifle shooter who wants to reduce the variables as much as possible. At just under £250 it’s not cheap, however when compared to what else is out there in its class; neither is it overly expensive should you be shopping in this area.