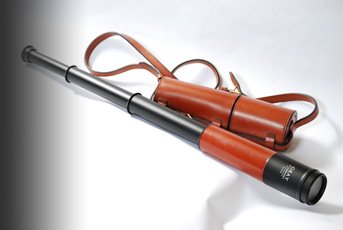 This test was a bit of an education for me, as it was the first time I had the opportunity to use what is called a 3-draw telescope. I’m not saying it’s for me, but it does offer a dimension that modern, compact binoculars cannot hope to address, as we shall see! Back in the old days and certainly in Scotland even today, the view to hunting optics was and is a bit different. Given cover was sparse and much of the stalk was belly-down across the bogs and heather you had to be damn sure that you got into the deer you wanted.
This required long range observation for which ghillies if possible used telescopes, which at the time were probably more prolific than they are today. Research showed that the old, brass, artillery spotting scopes were favourite. So established did they become that they were also copied for sporting use by a number of small companies. Gray & Co of Inverness were noted for their version, which is still manufactured today, though they are now owned by J Graham & Co who wisely still uses the original name.

There’s little doubt the Gray 3-draw scope is a thing of beauty and quality, but also an anachronism in the world of modern optics. Pretty much all hand made it’s not cheap at over £1000… However, it’s not just about tradition, as on the hill and for longer range use this 25x50 glass is rated up to one mile; a fact that came over in testing.
The principal advantages of the Gray when compared to older models are much improved optics and lighter yet stronger aluminium bodies. The glass is German; probably from Schott and multi-coated for superior light transmission.
The draw telescope gets its name as the individual tubes that make up the design slide into each other and are ‘drawn’ out to deploy. The forward section (barrel) is leather-covered and shows a pull-out sun shade and the aluminium body sections are black anodised. Weighing 46oz with its leather case it measures 10 ¾” closed and 31 ¼” open.

Operation is simple; pull out the scope to its full extension then push/pull on the rearmost (eye piece) section to focus. This may sound basic but it’s surprisingly sophisticated in terms of operation. At the distances I normally hunt at, a good set of binos (in my case Leica 8x56 BRFs) are more than enough to ID the target as to gender. However where the Gray scored for me is seeing the animals in detail at longer ranges, so allowing me to stalk into the one I want, or simply let them get closer, in the sure knowledge I knew which one was the target.
I initially thought the x25 of the Gray would be hard to use unsupported but it is not, likewise a little practice showed how easy it is to get a sharp focus. Where they differ to binos is in field of view, which is far more limited, so finding and laying on to an animal can be problematic at closer ranges or if they are in cover. None the less the magnification, which is what the design is all about, does allow precise observation at longer distances. This alone can save you a lot of wasted walking if the beast is not the one you want!
At the end of the day this is a traditional and specialised optic made to modern specifications with just one role; long range observation, which is well suited to Scottish hill stalking or that sort of open terrain use.