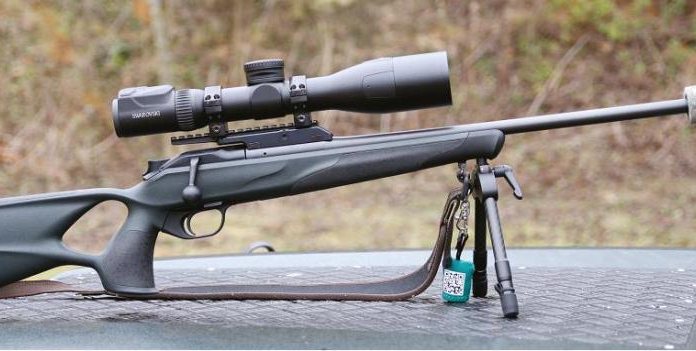 One of the biggest problems for the hunter; apart from being able to shoot straight, is estimating distance to target. However, the appearance of the compact, handheld laser rangefinders (LRF) revolutionised our sport. My first, was a Leica 900 monocular and it was like the god of hunting had removed the scales from my eyes! In combination with knowing and applying your ballistic drops, with confidence and ability you could push the range out; best shot for me was 385 yards on a Roe Buck.

However, there’s no such thing as a free lunch, target size/shape, colour and distance are all negative factors, perhaps the worst is hitting your target with the laser (pinging) to get an accurate reading. Enter LRF binoculars, offering greater stability, I switched to a set of Swarovski 10x42 EL Ranges; brilliant! However, another option was to build a scope with an integral LRF.

The first was Swarovski’s LS, big and heavy, but it proved the point, Zeiss the Victory Diarange 3-12x56 T, Bushnell the Yardage Pro 4-12x42mm and Burris with a near identical model (all now obsolete). Giving range only, they offered a more practical approach than a separate LRF, but what if it could be taken further?

Burris responded with their Eliminator III LaserScope, that ranged the target and positioned the aim point automatically for distance and individual ballistics, was this the ultimate LRF scope? About two years ago, Swarovski announced its ds (Digital Smart) 5-25x52 and later SIG SAUER Electro Optics their BDX (Ballistic Data Exchange). The BDX uses a separate LRF monocular that transmits the data to the scope, whereas the ds offers a fully-integrated, scope/LRF package.

Before proceeding, let’s consider ethics? Some will say if all you have to do is place the aim point and pull the trigger it’s taking the skill out of hunting. Others, myself included, feel that you cannot buy skill, it has to be learned; in essence, if you can’t shoot straight, then a ds etc. is not going to help. It might even encourage you to take risky shots! We must embrace technology, but, also understand its future effects; enough said!

First impressions are of a typical Swarovski product, but at nearly 16” long and weighing 2 lbs 6.5oz, with a 40mm body tube, the ds is in your face, it also offers a number of non-traditional features. From the rear, it shows the familiar-style, +/- twin illumination pads on top of the fast focus eyepiece, with the laser/ranging button in the middle. The rubber magnification ring is slotted for grip with a raised dialling fin and offers a range of 5 – 25x. On the left of the saddle is a standard parallax drum, marked 50 and 100 (with click) then ∞. The over-sized elevation turret is actually the battery compartment, along with the turret hatch tool and adjuster. However, there appeared to be no windage drum! Moving forward to the large objective bell there are two flush hatches at 12 (Swarovski falcon) and 3 O’clock, which protect the actual elevation and windage controls.

The build is clean and simple, certainly when compared to their X5, but all the magic goes on inside instead. However, I was expecting a far more complicated menu and set up procedure, which wasn’t the case.

The ds works in conjunction with a free downloadable app (ds Configurator), which is how you programme it. Set up is simple, but first we need to turn on and pair the phone and scope. Press and hold the + & - illumination buttons for 3-seconds and the green light on top of the eyepiece will flash. Enter the scope’s serial number (under the eyepiece) in this case: ds N883933847, then press connect on the screen and you will see a tick and the word connected and the light will go solid. Once entered, you do not have to enter it again. If you click on the pencil icon alongside the number, it will say: the following rifle scopes are saved and the number. I did find the buttons very stiff and you must push down directly on the +/- symbols.

On this screen, you can select display time 40, 60 or 80 seconds, wind strength 5-10 or 10-20 mph and configure in Imperial or Metric. Reticle point size and line thickness are selectable too, along with knock down power, here you set a terminal bullet energy figure in conjunction with target range. It tells you when you have exceeded this, the scope still ranges and works, this function can be switched off.

Now, to load up the ammunition specification. On the first screen, press the pencil icon next to Calibration and you can enter scope height above bore, altitude and temperature of your location and zero range. Press the > icon, which takes you to the ammunition screen. Here you can choose between a factory database or handload. The former is extensive, and you select the brand then go in and pick a calibre, which then displays options. Calibres are stacked with Imperial notation first then Metric.

For the test, I used my Blaser R8 Professional Success, in 243 Winchester with a 22” barrel in Tier One 40mm mounts on a Picatinny QD base. My hunting load is a 100-grain Nosler Partition over 37.5-grains of Norma 203-B, which gives 2987.5 fps/1993 ft/lbs that shoots into .75”. Here you fill in the following data: Cartridge, Bullet, Bullet Weight, Muzzle Velocity and Ballistic Coefficient. You also have the option of Expert Mode; here, velocity is measured between two points, which is selectable plus you add in air pressure and temperature.

Once you have entered, go back to the first Calibration screen and press Submit, then back to the main screen and select Transfer Now to upload. I did have a problem here, as I entered a load, then wanted to change it and assumed I could just delete and insert new data, but it did not change. I discovered that once you have entered, press the ‘tick’ icon top right then go through the transfer process.

The reticle is a standard 4a-type with an illuminated centre dot. Information appears in the upper quadrants – right, range and left, energy and the wind speed spread selected. You also see the illuminated moving section, which is a short horizontal line with a centre dot and two wind bars either side. As you range the target, this physically moves down the 6 O’clock stadia and stops at the correct holdover setting. The wind markers are fixed, as you have to physically aim off left or right in relation to them as to speed and direction. Say you have a 7mph blow from 3 O’clock, then you aim between the 5 and 10 mph lines etc. It’s down to you to select the right speed option prior to shooting; however, it’s easy to re-programme on the fly and I doubt if many will be shooting in speeds much above 10 mph. Another great feature is the ds automatically compensates for angled shots.

Turrets offer 60-clicks per turn, subdivided into 10s in a choice of values; 7mm @ 100m or .25” @ 100 yards. You get 2.5-turns in windage (37.5”) and elevation is 3.5 (52.5”). Zeroing is by a small plastic key that slips over the multi-spoked adjuster wheel with a slot in the middle that has to be turned with a wide screwdriver blade or big coin. Although appreciating that the tools are held in the scope so always on hand, it’s a bit fiddly to adjust, but then again it’s zero and forget once you’ve done.

Illumination is initiated by a 1-second press on either of the adjuster pads, then further presses on +/- adjusts the levels. Pressing both for about 2 seconds turns it off. To range a target, press the button and a red aiming circle appears, which you centre, then release it and the distance comes back almost instantly. I found a rifle-mounted LRF is perhaps the most accurate system I have used.

Using my Swarovski 10-x42 EL Range binos (supported) as a control, I found that the ds was either cock-on for distance or at worst one, occasionally two yards off, or was that the EL’s? Effective measuring range goes from 33 – 1500 yards, however, maximum aiming point correction distance is 1120 yards, which is far enough. In use, the ds tells you when that has been exceeded. The x25 setting really allows you to reach out and study your quarry too.

The weather was against me, as I had planned to shoot out to 800m, but on the day, it rained cats and dogs, so a wash out. I did, however, get out to 350-yards, which for a 243 is starting to drop and slow down considerably, so a good test of the ds. Targets were 4 and 8” steel gongs. Zeroed at 110 yards it was shooting .75”, I moved back to 200 and rang steel, feedback is near instant with the sliding aimpoint grid dropping down to the hold over height and the range appears. As it was, there was little wind worth mentioning and I had selected the 5-10 mph markers, which work well when needed. I was smacking the 4” in the middle at all ranges.

Back at 350 yards, the advantage of the x25 magnification becomes apparent, as that 4” gong looks small at my usual x15 mag on my Z6i 2.5-15x56 BT. My ballistics programme (Ballistic AE) told me that drop at this distance is 17.5”, so using a long paper target I turned the ds off and aimed at the top mark. The group fell around 18” lower, I then switched it back on and shot at the first group and the second group fell on it; good enough!

From a practical aspect, I found the ds big and heavy and would not want it on a walk and stalk rifle; for me, it suits a longer-range culling or varminting role from a supported position. Optical quality is, as ever, 100% with a crisp and clear view and sharp, slim reticle, just right for longer shots, add in Swaroclean exterior coatings and it’s all there. It’s hard to believe that light transmission is only 83%, but then again there’s a lot of stuff going on inside, this becomes evident in low light, but you can’t have it all. To put this into perspective a Swarovski Z6i 5-30x50 P L offers 90% with its 30mm tube.

At first, I was not enamoured of the ds; yes, technically advanced and doing the business accurately. However, it’s ability to put round on round where it needs to go, at and well beyond most standard hunting ranges with speed and ease won me over. I doubt if dialling in with conventional tactical turrets is any less accurate, but the speed of target acquisition, ranging and engagement is hard to beat; as is the ability to input and change data on the fly. My one niggle, is that it could do with a remote operating switch you could place where you like. Let’s not pretend this is not an expensive and specialised scope, because it is. Would I have one? Before testing I would have said no, now I say yes, but would mount it on a full custom varminter in some crazy, Ackley Improved calibre and glory in what it offers.