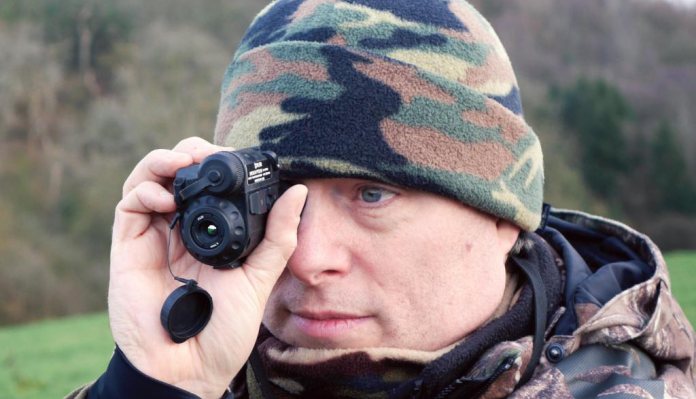 There are some impressive larger thermal devices on the market, and there are some fun smaller ones, but there is nothing that is simultaneously as small and as seriously useful as the Breach thermal monocular from FLIR.

If maximum range and resolution are what matter most to you, then look elsewhere, but if genuinely practical pocketsized performance appeals, then FLIR’s Breach has no equal.

Its size and weight –or rather the lack of them, are what instantly and ultimately set the Breach apart. The monocular ships in a hard ABS case, but thanks to the impressive ruggedness of the Breach’s fibre-glass reinforced polymer body this can be quickly assigned to other duties! Just pop the tethered rubber cover over the Breach’s recessed lens and shove it in your pocket or pack or wear it on a lanyard and tuck it inside your smock. Better still, exploit its properties to the max with a head-mount and have it constantly available to flip up or down as required.

Ergonomics are good too. The Breach fits neatly into your hand. On the right-hand side is a flat surface mounting three rubberised buttons. These are easy to locate and to differentiate by touch, but being low-profile and requiring quite a hard press, they are virtually impossible to operate unintentionally, and for extra fool-proofing, the power button has to be held down for at least a couple of seconds to turn the unit on and a full eight seconds to shut it down.

Each button has several functions, depending on whether you’re in the menu or out of it, enabling you quickly to choose options, to adjust the screen brightness or the digital zoom (1x - 4x), to capture stills or to start and stop video recording to the built-in memory. The menu itself is easy to navigate and well-designed, with the most frequently used options –palettes and presets – at the top of the first page. It doesn’t stop there, however, and further down you will find a series of more subtle options that give you additional control over how the data from the sensor is displayed on the screen.

Most of the time the basic settings are all you need, but in extreme conditions, such as when everything is almost uniformly hot or cold, tweaking the second tier of options can bring out features beyond the standard parameters. You absolutely don’t need to master these settings to run the Breach, but more familiar you become with the unit, the more you appreciate when and how to use them to enhance its performance.

As a simple example, one of the most useful palettes is ‘outdoor alert’. This takes the basic whitehot palette and accentuates the hottest parts of the image in red. Usually, this means that only the bodies of animals will generate red accents, but sometimes the thermal profile of the scene causes these accents to appear on inanimate objects too. These are rarely warmer than animals, however, so the fact that the Breach can be tuned to differentiate between very similar heat levels, and to accent only the very hottest, is a real boon.

Also impressive is the lens. Despite its minimalist 9.1 mm; F/1.04 fixed-focus spec, it delivers a clear image at all ranges and avoids the need for continual refocusing that comes with increased lens size. Larger lenses give more range, of course, but the Breach is still able to detect the presence of larger animals several hundred metres away, and can even pick up rabbits and squirrels at over 100m. Species recognition has a lot to do with movement and context, but sub-200m (i.e. at typical night-shooting distances) I’ve yet to have a surprise when flipping the lamp on, or transitioning to NV. It goes without saying that you should never pull the trigger on any target you have not positively identified or without first confirming the presence of a suitable backstop.

Another thing I like about the Breach is the display screen. Thermal devices typically opt for a medium-resolution (640x480) screen to display the output from a mediumresolution (384 x 288) sensor, but the Breach takes a different tack, teaming its slightly lowerresolution 320 x 256 sensor with a high-resolution Quad-VGA (1280 x 960) FLCOS display.

This shouldn’t make sense, but it results in menus and on-screen data that are pinsharp and an overall crispness that attests to the effectiveness with which FLIR’s Digital Detail Enhancement firmware interprets the data from the sensor.

To focus the display, there’s a dioptre-adjustment ring with just the right degree of friction to hold position once set. Behind this, a rubber eye shield offers an excellent balance of flexibility and resilience. The shield can be rotated for left- or right-eyed use, and when inverted the Breach cleverly re-orientates its display. It knows which way it is pointing too, showing a bearing as well as cardinal compass points in the top R/H corner of the screen!

Also impressive – believe it or not – is the USB port. Protected by a tethered plug made of solid rubber, this uses the latest USB 3 Micro B format to deliver a firm and fast connection that can be used to power the Breach as well as for the transfer of stills, video and firmware upgrades. Normally, the Breach draws its power from a single CR123A battery, giving a run time of around four hours, but using an external, rechargeable power bank has obvious advantages: no single-use cells to buy, store or dispose of; and no anxious clockwatching of the battery icon.

Indeed, the test sample was notably glitchy about recognising and displaying the charge in any given cell, at times even failing to power up with brand-new batteries. In this context the ability to attach an external power source – which worked flawlessly – was a godsend. Additionally, the Breach can boast Bluetooth connectivity. Unfortunately, at the time of writing the app required to control the settings and view images externally is still under development, but when launched it will add an extra dimension to the Breach’s functionality.

The Breach gives away much less in performance to its larger rivals than its size suggests. All the same, if you buy a Breach it will be for its size, as it is this that makes it uniquely handy and uniquely versatile. Why versatile? Because it is the first consumer-oriented thermal device that can be quickly attached to a helmet or head mount, or to a weapon mount where it will sit squarely ahead of a red-dot sight. Granted, at first sight this will appeal more to airsoft skirmishers than hunters, but when sitting in ambush, and even when stalking, the handsfree convenience of having thermal vision wherever you turn your head is a fine thing indeed. You can take this a step further too by adding FLIR’s bridge mount which lets you mount the Breach in front of one eye and a NV monocular such as FLIR’s NVMD-40 in front of the other. But that’s a story for another day.