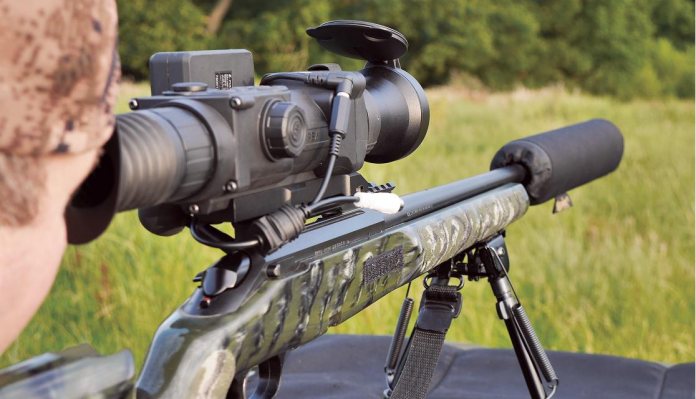 In my first review of a Pulsar Apex thermal riflescope I took a look at the XD50 model, and came away very impressed.

Seeing effectively the same image in the Apex as I was getting from my Pulsar Quantum thermal spotter was a major plus too… except that in the Apex my quarry was now behind a reticle, and placing any reticle on live quarry obliges you to think hard about precisely how that image corresponds to the reality of what you’re aiming at.

With the Apex XD50, I had to bear in mind that one ‘click’ of adjustment when zeroing would shift the impact 3cm @100 metres, that the display was dependent on the width of each pixel, and that the crosshair position didn’t look exactly the same in the main image as it did in the picture-in-picture (PiP) image (which you can’t use in zeroing mode). True, there wasn’t much in it, but if there was going to be any error, I wanted it to be on the side of caution, so adapted my tactics to ensure shots could be taken under 100 metres. The result was that, whilst I killed a good few foxes, and wounded none, several got a free pass.

A Little Bigger, A Lot Better

But just when I was thinking that life is always about compromises, Pulsar distributors, Thomas Jacks Ltd., kindly sent me the Apex XD50’s big brother, the XD75. As its designation suggests, the ’75 has a bigger objective lens than the ’50. That impressive germanium lens adds just 38mm and 70g to the ‘75’s vital statistics, but – as we shall see – the performance payoff is huge. To begin with, it means more magnification (3x-6x vs. 2x-4x for the ’50), thus more pixels-per-fox, a more precise relationship between the reticle and the downrange image, and smaller “click values” (2cm @ 100 metres) thus permitting a more precise zero.

Having previously tested both the Apex XD50 and the Digisight N870 LRF, I was already familiar with the XD75’s clever one-shot zeroing function, and by the second shot I was on the bull. Two more gave me a 1.25-inch group at 100 metres. This was going well.

Moving back to the 4x4, I rested the rifle on one of Best Fox Call’s bonnet bags, and lined up on a six-inch gong hanging 200 metres away. Already impressed that the big ’75 let me identify the gong among all the thermal ‘clutter’ from the vegetation, I was delighted when my next two shots also hit their mark. A look through the spotting scope showed both strikes almost touching but slightly high and right so I tweaked the zero and put my next round smack in the centre of the gong. Before using it in earnest, I took the Apex out for one more session on targets at 300 metres, and again it did the business, confirming that the zero was both precise and reliable.

Even cutting back my range limit to allow for wind (hard to read in the dark), imperfect rangefinding, active quarry and the buzz of foxing, it was clear that the Apex would shoot as far as my usual Titan/ day-scope set-up, and with better target visibility to boot.

Before relating how I got on with the XD75 on foxes, though, I’ll take a moment to consider the functions and ergonomics of the Apex.

The sight attaches easily to a Picatinny rail via a chunky mount that can be unscrewed and swapped out with an optional replacement if a different format is required. The bolts holding the mount onto the rail can be snugged-up with a turn-screw or a spanner, but I’d really like to see Pulsar move to a QD leverlocking system for additional security, repeatability and ease of use. The controls may appear complicated at first, but five minutes playing about will fix that; after which everything you need is literally at your fingertips. The wireless remote control is a great asset too, letting you control power, calibration, PiP and zoom without breaking your position.

The tab on the front focus ring is far from small, but it can still be a little hard to find at first, as it’s contoured to fit flush against the forward part of the housing. Your hand soon learns to find it, though. Meanwhile, the rear dioptre ring couldn’t be easier to use, and the soft rubber eye cup does a great job of shielding screen glow, ensuring correct eye position, and keeping things comfortable even under significant recoil. The only real niggle is that, whilst you can dim the on-screen menu options, you can’t do the same with the reticle or the status bar. The constant brightness of these is unquestionably tiring on the eye, so it would be good to see a firmware fix. Mind you, I’d love to see Pulsar kit the Apex out with the rangefinder and anti-cant display of the N870 LRF too. Maybe one day.

Back in reality, the battery compartment takes 2x CR123A cells, but as I prefer to avoid single-use batteries, and because the battery cover was a bit prone to popping open unexpectedly, I ran the ’75 from a Pulsar EPS3 rechargeable power pack throughout the test. More weight, bulk and expense, I know, but oodles of battery life and no spent cells to dispose of. Also enhancing my Apex experience was having a Yukon MPR digital recorder to plug into the Apex’s video out socket… Though all too often I was so focused on the quarry and the shot that I forgot to turn it on and so missed recording some of my ‘greatest hits’!

First time out at night with the Apex XD75, I set up to cover the far side of a field where I’d seen a vixen and couple of well-grown cubs on previous outings. This would be a 200 metre shoot, but no other position offered a safe backstop. A half-hour in, the cubs emerged from the hedge and began to nose about in the docks. I watched them until they were on opposite sides of a small hummock and then dropped the leeward one with my first shot. The second stopped to figure out what he’d heard and caught the next round in the chest. Two for two, at 190 metres and 200 metres.

About 15 minutes later, while scanning with the Quantum, I spotted the vixen, about 100 metres out and angling away toward the far hedge. I got the Apex on her, barked, and put her down with a shot behind the shoulder as she looked round.

So began the best unbroken run of fox kills I’ve ever had. From the lens back, the XD50 and XD75 are virtually the same, but the big black eye of the 75 takes what is already an impressive system and lifts it over a threshold to a place where your realworld capability is limited by your skill, and your ballistics: not by your optics