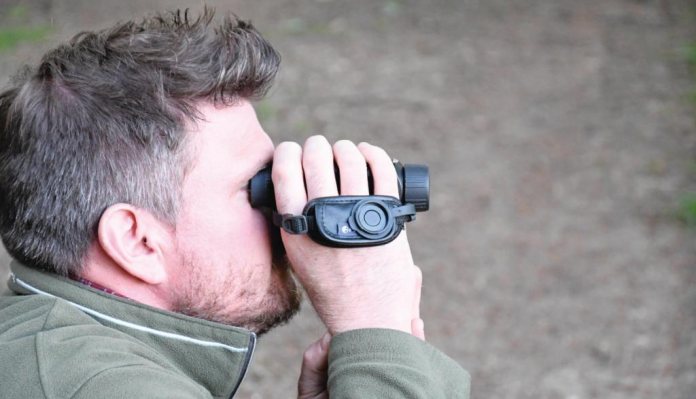 Pulsar never seem to stand still and although continuing to add greater imaging capability and accessories at the top end, the release of the Axion range was a significant evolutionary step! Although not offering the same image capability as Helions and Accolades, the winning factors were the cost and compact size making them more accessible to shooters’ budgets and, perhaps for deer stalkers, an added capability for detection at little cost in terms of weight or bulk.

The latest XM30S is called the S because of a Sony sensor upgrade, and is priced, in what is my opinion, to be the Zenith in terms of value for money when looking for that first step into thermal spotting technology. A 30mm objective lens offers heat entry into the 4.5x base magnification Axion which will digitally zoom on full screen or with picture-inpicture to 18x magnification. It is undeniable that more zoom equals more pixilation and although video and stills can be recorded, output images, especially stills, do little to demonstrate the true detail and smooth viewing capability from the 50Hz refresh rate.

The eyepiece carries a slim rubber collar that fits neatly around your eye to seal out any extraneous light with a focus dial for the internal screen, battery life is in the bottom right corner. This control is smooth and firm enough that it only needs setting once and the rubber cup certainly makes for more viewing comfort with a generally more repeatable eye position (giving consistent focus) than even the Helion or Accolade units.

Image focus is handled at the objective collar and I found focusing at about 150-metres allowed me to leave well alone for general scanning of fields, unless particularly large. At close range, adjusting focus is more important, but at the end of the day you aren’t going to get the ultimate daylight picture quality, so chasing your tail all the time is a little overrated for me. At this level thermal is primarily for detecting the animal, not the detailed examination like daylight binoculars. Static viewing on these smaller Axion is not comparable to an Accolade, but you still have all the functionality of watching dynamic animal movement which tells more than any photo ever can.

There are eight colour palettes to suit your preferences, and the top button layout offers familiar menu functionality to all other Pulsar kit in terms of long and short presses to double up functions from each button. After switching the unit on, the screen lights up with image in just threeseconds which is yet another improvement, and you can either shut the unit down entirely or just deactivate the screen to conserve battery life which I found ran for 3.5- to 4-hours in general.

The cylindrical battery slots in the back, a charger is supplied along with a nice Cordura carry case for protection. The unit is ambidextrous with the hand strap fitting to either side and the lens cap sticking to it magnetically, which is such a subtle but beneficial feature. The underside shows a ¼-inch thread for tripod mount and the Stream Vision app is supported for Wi-Fi viewing in real time, which can be handy if you are in a vehicle with multiple viewers wanting to see the action. The new modified 320 x 240 12μm pixel pitch sensor with Sony HD Amoled display at 102 4x 768 resolution will detect and display the usual 1.8-metre-tall heat source up to 1200-metres away, and 16GB on board storage with a Micro USB port access gives plentiful recording time if that appeals.

I used the XM30S alongside (double the price) XQ38 Accolades, which are now the baseline to all my thermal opinions; these seemed to show superb balance for capability at cost, but that’s not to say the Axion doesn’t appeal, even to me. The joy is the compact size which, when deerstalking, can be slipped into a coat pocket with no need to be permanently slung around your neck on a lanyard. Plus, I actually prefer the eyepiece lens and rubber collar for consistency at any price, it was particularly appealing in daylight use where more concentration can be needed with thermal to ignore hotter day temperatures and intruding lighting. At night, detection of rabbits on short grass of a golf course was no problem at 300-metres on a muggy evening, the cooler, dry air a few nights later allowing that to stretch a little, with hares quite vivid at 330+ among the horses in paddocks. I rarely went above 6-8x magnification as increasing pixilation made it seem pointless, but I never found myself missing out on initial detection of quarry, just lesser image detail than the Accolade.

Forgetting the availability of the Accolade, I found myself really appreciating the capability of the Axion at its much more modest cost, feeling that it is a more realistic purchase for many night shooters where the 4.5x mag seems fine as a base level. In woodland, I would prefer a little less, no more than 3x, but you can’t have it all and I still found the Axion capable of picking out deer through May’s thickening seasonal foliage growth, as long as I scanned a little more slowly to avoid dizziness, yet it’s still far quicker than using regular ‘glass’ for that initial ‘ping’ on quarry.