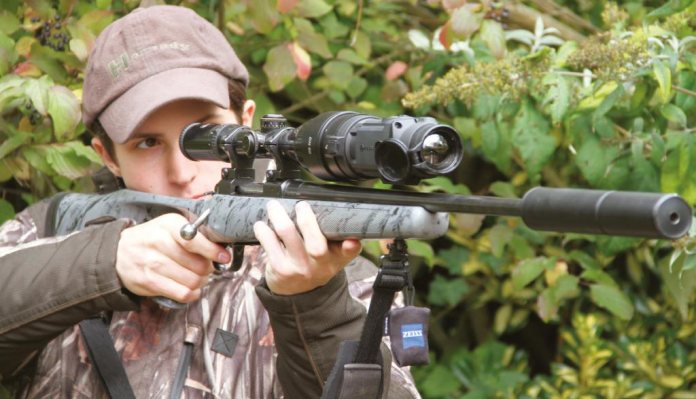 I first tested the older version of the Core (FXD50) thermal from Pulsar back in January 2017, they have since then introduced a new version the FXQ38 BW. This is a great design for those wanting to use it as a hand-held observation device or mount it in front of your day scope to give the rifle a 24 hour capability.

The first bit of good news is that it’s front-mounted, so gets over that annoying and unavoidable problems of rear-mounted units. Firstly, the increased outboard length at the rear, forces your head back on the butt that feels very unnatural in the aim. Secondly, to counter this you could move your day scope forward, but in doing so makes it useless for day use as the eye relief is all wrong. Plus, it can be easily switched from one scope to another, so any rifle can be a dedicated night gun or not as the need arises.

This Pulsar is available in two models, the FXQ38 BW and the FXQ50 BW, both offer very good quality, detection range and price. Retailing at £2789.95 and £2989.95 respectively. Both offer a superb image with minimal zero change to your existing rifle, are waterproof, sturdy, lightweight and capable of long range detection. Both are supplied in hand-held monocular form with removable rear eyepiece, but you need to buy the additional scope mounting kit Pulsar calls the Cover Ring Adaptor (CRA) to use it as a front-mounted, add-on.

It’s a neat and handy little thermal device that weighs only 380 grams without batteries and measures 180x65x60mm. This means it’s easily kept in a pocket until needed and does not put strain on your day sight when fitted. The outer casing is waterproofed to IPX7 rating and is impact resistant and can withstand recoil from calibres up to and including the mighty 375 H&H Magnum. The lens on this model is a 38mm F1.2 Germanium type that gives a field of view (FOV) of 17.2 metres at 100 metres and gives a 3.1x magnification increase to the observed view. Although you do have a 2x digital zoom function if you wish. The objective lens is protected by a flip-up, plastic cover that can be rotated so it does not interfere with mounting.

Like all sights of this type there are two focusing systems, one on the eyepiece for the view and reticle and the other upfront to focus the target. This one has a raised lug for faster operation. Power is supplied by two CR123A batteries with a quoted, 4 hour run time that operates in -25 to + 50° Celsius and is IPX7 rated, so highly weatherproof and all this backed up with a three year warranty. Keep some spare cells handy and they fit into a compartment on the left of the unit. It comes with the external power adaptor, which allows it to be used with an external battery pack.

Controls are mounted to the top cover and have rubberised, waterproof buttons, which makes either Core an all-weather proposition. There are three calibration modes: Rocks, Forest and Recognition, which are used for a better image to suit the users need at the time. Rocks being an enhanced contrast feature, Forest gives better low contrast control, whilst Recognition gives an improved image rendering. Actually, Forest bought out more detail to the white hot image.

You have four buttons in a quadrant from, for ON/OFF, mode and left and right navigation and can be used to increase or decrease the brightness or image contrast. With the left being also used for colour inversion i.e. white hot or black hot. There are also three calibration modes of manual, semi or fully automatic, that helps to maintain a peak image under differing conditions. You also have a remote control unit, but I did not use this. Underneath is the tripod adaptor and you do have a remote switch option too.

The Core does not fit directly to the scope’s objective bell, the interface is created by the CRA. This slides over the bell and is secured with a locking lever, sets of rings are supplied to take up the space for a secure and consistent fit. At the front of this is a bayonet-type engagement that the Core actually locks into. As every scope is different come in three sizes to suit 40, 50 or 56mm objectives. Once attached the zero is unaltered on a suitably sturdy scope and it won’t change your shooting position either. The Core just slides ON and OFF at the flick of the lever, it protrudes just 202mm from the objective bell, which matters little as it’s front-mounted.

Please note when going into front-mounted mode, the Core’s rear eyepiece has to be removed first for obvious reasons. Then a special adaptor is fitted in its place, which allows it to engage with the CRA already fitted to the objective bell. Going hand-held is just a reverse of the process by removing the adaptor and refitting the eyepiece, also the CRA can stay in position as required.

You have a good sharp monochrome image, with green-tinged AMOLED display that is fed by the 384x288 17 um thermal sensor, so detection range is an amazing 1350 metres with impressive image quality too. You have a magnification of 3.1 to 6.2x combined with a 17.2 metre horizontal field of view (FOV) and a detection range of 1350m which is all very impressive. Because it is front-mounted there is no parallax change or zero loss and you just focus your scope’s eyepiece and the Core’s front focus lever to get everything clear.

The reticle is superimposed onto the AMOLED display, so, dependent on your scope’s magnification, on low mag i.e. 3x power you will see its rectangular, outer shape, but as you zoom into a higher magnification it concentrates the image at the centre of the display. This gives a very good picture up to 6-8x mag, but after that it pixelates. This version of the Core is optimised for scopes up to 3-4x power remember!

Image wise I was really impressed, although not as sensitive as the Trail thermal sight, you have really good definition, contrast and an excellent detection range. But you need to get closer to define what the thermal image is past 250 yards or so for smaller game, as a pheasant could be a sitting fox further away. But with practice you can identify different animal species well enough.

The big question is does it hold zero? I set the Core up on a Tikka 308 Win rifle with Schmidt & Bender scope shooting 110-grain V-MAX and 165-grain RWS ammo to see. I used a Thermabright Passive thermal target from BushWear. If you have ever tried to zero a thermal weapon sight, you will know that it is pretty difficult to get a hot or cold enough area on a target board to get a good aiming point. This product works well and solves the problem easily.

The Thermabright targets are available as a Bullseye Rangers (circular type) at 475x475mm and cost £29.99 with 20mm passive thermal patches at £3.99 for a pack of 34. Alternatively, you can buy a pest controller special in the form of a Coyote Passive that resembles a live fox, it’s 1050x475mm and cost £54.99. Yes, they are expensive, but the material is strong and can be left out and will last months of weather and rough use. All you have to do is to tilt it backwards at least 10° and they literally glow in the thermal viewfinder with hot and cold areas so you can easily zero your rifle.

At 110 yards after zeroing then removed and refitted the zero did change to 1.5 -2” right but consistently at 10 power. This is because at this setting, the image pixelates and at this distance one pixel can be two inches across. On lower power it was 0.5 to 1” off. But always consistently right so you can account for that. I also attached, re-attached and wiggled it and the group only dropped 0.5” lower, so in reality, put on and shoot. That’s an honest test. I also did tape in the spacers of the clamp so as not to lose them as they can slip out. I also put a piece of tape on the scope and clamp fitment so I could align both perfectly for a consistent fit.

I was really impressed with the new Thermions when I tested them recently, but these Cores do offer a different dimension to user-friendly and diverse thermal usage at a good price. I was out with the Core in my jacket pocket ready to attach on my scope, but all that jiggling about had made the clamping lever work lose, so I would suggest some PTFE tape around the threads just to keep it tight. Other than that, it really performed well and for those wanting to maximise their usage of thermal observation and scope-mounted devices and to use the latter on rimfire or centrefire calibres then ether of these Cores is for you. They are also backed by Thomas Jacks warranties and trained staff.