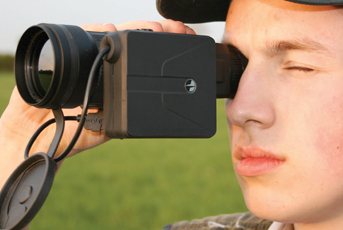 Once upon a time night vision was seen as revolutionary in the field of shooting allowing detection beyond the normal human range but today it is pretty well standard. Well now there’s some new technology on the block - and with prices dropping - Thermal Imaging devices for detection of your quarry is very much with us now.

I have tested a couple of Guide Thermal Imagers, the 518 B and C from Thomas Jacks but a new device from Pulsar called the Quantum HD38 is very interesting. This is a very compact user friendly unit that will detect a heat source up to 985 yards and is ideally suited for detecting your quarry species way before it see`s you.

Thermal imaging as the name suggests detects an object by the heat that it gives off. Everything has a thermal signature and the Quantum is able to detect these small differences in temperature through its Germanium lens and convert the raw data to a real time TV image in black and white. You do not see a pixelated image but a very clear negative or Black and White photo image. It is amazing what emits heat and what does not. You cannot see through glass as it reflect heat, and fog is a no-no also but as an observation or detection device the Quantum is phenomenal. In fact nothing can hide, even a rabbit tucked up under a bush and invisible to the naked eye is easily seen as the heat source from its body is hotter than its surroundings and so lights up like a torch.

In fact, it actually feels like cheating, you can sweep a field or woodland edge to detect or dismiss that area if no heat source is seen. It works in day or night so has legal implications dependent on the game species you are hunting. It is also very handy at counting numbers of animals, security issues to keep poachers at bay and also detecting heat loss from domestic premises.

The Quantum HD38 is one of four models, this has the best spec and greatest detection range of 985 yard. The Frame Rate is 30Hz that is far faster than the older 9Hz which means that viewing is much clearer. It stops the image lagging behind as you move the Quantum from left to right. The magnification is 2.1 x, which seems small but actually is more than enough as it gives a good 14.5 degree field of view so allows you to observe a greater area without constantly sweeping.

Four AA batteries are capable of powering the Quantum but for longer viewing I would strongly recommend the accessory power pack. This EPS5 unit will keep you viewing all day and attaches to the side of the Quantum on a Weaver rail and plugs into the external power socket.

To switch on is easy, there are three switches on the top of the Quantum, the one nearest you is the on /off switch, push down and the Quantum will start up. I would leave the lens cap on as you start up as the Quantum also calibrates itself and leaving it off will leave artefacts on the viewing image. The second button down is the calibrate button that is used to further calibrate the Quantum to changing temperature environments. Again leave the lens cap on or replace it and push the button a couple of times and you will see the screen/image sharpen up as you do so. The final button is the 2x digital zoom and also the invert switch to change form white hot to black hot viewing i.e. white or black showing as hot.

There is a focus ring just behind the lens itself and the eyepiece is focussed in the usual way by turning the eyepiece itself. There is also a rotating switch on the front face that when pushed in alters internal settings like time, date, and when it is revolved it alters the sensitivity of gain of the unit so you can alter it manually. There is also a video out socket and tripod mount.

This Quantum unit does not have a picture or video capture as does the Guide 518 thermal imagers but its small size and clear image is very impressive. The viewing screen is a quality OLED display of 640x480m pixels which gives a sharp clear image to view but at 30 Hz frame rate I did find a little lag time as I scanned fast from left to right. The screen is enhanced by pushing the calibrate button (lens cap on) as this recalibrates to the environment you are viewing in. You can view either as a white or black hot image. To me the white hot instantly picks up heat almost like a torch shining at you whilst the black hot shows more definition to the image. It’s such an amazing feeling knowing you can see the unseen, yes it is cheating yet it saves so much time being in the wrong place However, it should be regarded as an aid not a replacement to good fieldcraft in my view.

I could easily pick up foxes to 500 yards and rabbits out to 300 yards. All you need is a single pixel of light to say there is something there and then you can stalk in, day or night. I used it to pin down foxes at night as well as rats and rabbits around the farm and locate bedded deer during the day for a successful stalk. The Quantum is so sensitive in early spring you can actually see the sap rising in the trees and bushes and rabbits were given away under bushes by heat rising from their warrens!

There is no doubt in my mind that thermal imagers are here to stay, whether you think of them as an aid or ‘cheating’ is immaterial, they are legal and available. In fact if you are a professional keeper, forestry Commission ranger, pest controller or just a well healed shooter, the Quantum HD38 saves you a whole lot of time and effort looking or stalking in the wrong area! You still need to stalk down wind and exercise good field craft but it takes the “slog” out of it. Sure the price is still a lot but prices have come down an awful lot recently.

The Quantum is actually great value for money, a good size to take out into the field, and despite a slight lag when scanning quickly it is a real asset to own –  and definitely buy thr accessory pack and. GM