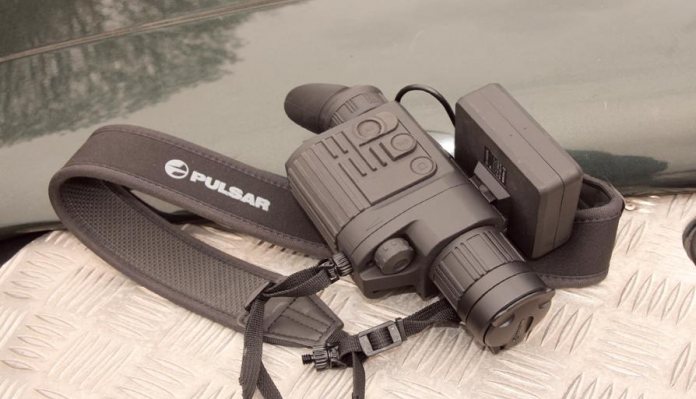 The tools available to the night shooter have increased exponentially over the last 25-years! Time was that a Nightforce lamp that could be mounted on a truck roof or rifle scope was seen as the cutting-edge of technology. Likewise, the early NV optics! Fast forward to the present day and we have an enormous array of image intensifiers (both tubed and digital) along with dedicated thermal imagers and scopes. Although we now have all this technology readily available, I have no doubt that foxes, rabbits and rats will still hold the upper-hand for a very long time to come!

Having said that, even a technophobic dinosaur like me can see the huge benefits in all these advancements. I run a commercial-driven game shoot, See theUnseen so fox control is paramount, if they have killed or pushed away too many of my partridges and pheasants I make no profit and draw no income. Using night vision to aid in fox control has become essential, but I am always looking for the next level of advancement to make the job easier and time spent out more cost effective, and it looks as if the thermal equipment from Pulsar is just what is needed!

When offered the chance from Nightmaster to look at the Pulsar XD38S thermal viewer, I jumped at it. The first time I used something like this was in 1995 when working for The Forestry Commission. In those days, the feasibility of doing deer counts coupled with some clever computer modelling to give accurate population densities, was being looked into. We borrowed a device from the MOD, which cost around £45,000 and we stumbled round the forest in the dark, praying not to trip over and break the borrowed kit. From what I remember the quality was poor compared to what the XD38S offers! My, my; haven’t things come on a long way in 21-years?

This model of Quantum weighs a little over 16oz with the four AA batteries installed; however, Pulsar also supplies a rechargeable, external battery pack weighing 22oz, which is small and easily fits in the hand and is also supplied with a strap to hang round the user’s neck. The controls and explanation of how to operate are pretty much idiot proof, even I managed it without help from my 10-year old!

The external battery pack is optional; but well worth the money, as the 4x AAs don’t seem to have much of a run-time, whilst the rechargeable gave around 20-hours of viewing time. There are all sorts of clever options on the menu, but for the likes of me the most important features are the ability to have either black or white hot and being able to adjust the brightness and recalibrate if necessary. Here are just a few functions: six colour palettes for images captured by objective lens, monochrome (usual hot white, hot black) and colour highlighting the hottest and coldest areas with. High image frequency – due to the high image frequency (50Hz) it is comfortable to use thermal camera dynamically (during rapid moving of observer or object of observation). Range finding reticule – the Quantum XDS has a stadiametric range finder performed in the shape of a range finding reticule which enables distance measuring to observed objects with known height (deer: 1,7-metres; boar: 0,7-metres; hare: 0,3-metres) with a sufficient precision. Operating modes – three are suggested, each designed to deliver best possible image in specific viewing conditions; CITY (enhanced contrast), FOREST (low contrast) and OPERATION (improved rendering of hot objects’ details). Long viewing range – actual range of detection of a human figure (1.8x0.5-metres) in the field against the background of the forest for the Quantum XDS varies from 500- to 1250-metres, depending on the model. You also have a video facility, which I have no use for, although after using the unit and on reflection it could make a useful aide memoir for reviewing your performance, or as a training tool in target identification and general species recognition!

Different ambient temperatures and the heat being given off by the ground and trees etc will dictate the better brightness level and whether white or black hot are more effective and of course this will be down to user-preference to some extent as well. The image presented is fairly bright on the eye, and as with using image intensifiers I find it preferable to keep both eyes open and then close the observing eye for a spell when not scanning to rest it.

For my part of East Anglia, I found the detection distances to be excellent, by observing how animals moved it was possible to accurately ‘ID’ hares and roe as such out to 600-meters. There could be some initial confusion between fox and muntjac, but again by being patient and seeing how the animal moved, more positive identification could be made and the rifle with image intensifier being put into play! A good example of this was one of the initial trips out testing, I was scanning a field looking at hares and roe out to nearly 400-metres and a new heat source appeared. Initially I thought it was a muntjac but the way it behaved, running towards a roebuck, then backing off did not feel right. I put the XD38S down, went to the rifle and sure enough a fox was positively identified with the aid of a bit of IR from my Nightmaster 800 IR torch. It was dully called in to present a better shot and dispatched, the thermal viewer immediately became the next item on my must-have list and I started to wonder how I was going to re-think my budget to make it happen. On another night out, having found a litter of cubs during the day, I set up calling and scanning with the Quantum, 10-minutes later a large heat source appeared that was much bigger than the hares in the field! The way it moved and then started to work the wind suggested a fox. I switched to the rifle and less than a minute later the vixen was accounted for, making for a very happy gamekeeper.

There is no doubt that scanning with thermal for the suspected fox is much easier than doing so with an image intensifier In areas where the majority of foxes are lamp shy or at least wary, being able to scan fields with thermal is a huge advantage, it is also quite startling how much one does not see with a lamp compared to thermal.

It seems to me that with a combination of using a thermal viewer to spot with, then the image intensifier on the rifle doing a thorough and professional job, is very much easier! The reason for both is it’s not possible to see all potential obstructions between animal and shooter with thermal but the image intensifier does give the shooter a better picture for a clear shot.

There can be no doubt that any estate or commercial game shoot would be very well-advised to invest in the Quantum to use for fox and other pest control. Of course, there are the other uses, such as security, deer counting and monitoring other wildlife that this unit would prove to be invaluable for. In short; I cannot imagine why anyone involved in wildlife management would not have a Pulsar Quantum if they are truly serious about what they are doing, I know that as soon as funds allow I will be making my purchase.

A replacement for the XD38S is due out soon, with a host of improvements, look out for an up-coming review.