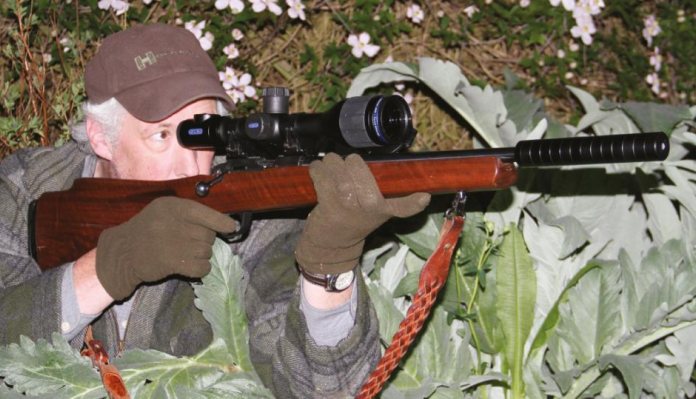 When I first tested the Guide thermal imager from Thomas Jacks all those years ago, I was utterly stunned at the possibilities that this technology would have on the shooting community. It was a complete game changer then and even more so now. Thomas Jacks are Britain’s leading NV and thermal outlet for quality observational and weapons grade sights of this nature. Their line of Pulsar devices is recognised as the best in their field and, having tested all of them now, and buying a Pulsar Trial thermal, shooting has never been the same.

Big and boxy no more

However, up until now, most NV or thermal devices have had the same basic layout of a boxy design, with often awkward mounting systems. Enter the Thermion from Pulsar; this sight is like no other thermal device, as it visually looks like any other day sight and can be mounted using standard 30mm rings to suit. It is available in five models, dependent on the range and image quality, and price you need for your type of shooting.

I had the XM50, which sits in the middle of spec and price point at £3479.95, with the XM 30 and 38 models with lower magnification below this and the XP models with HD sensors priced higher. Thomas Jacks see the XM50 as being their best seller, as it addresses issues some people have about enough magnification, this model starts at a native 5.5x, very handy. This was the first in the country and, after the test, I wanted to buy it! Read on.

If no one told you it was a thermal sight, you would be forgiven in thinking it was a normal day scope; it looks identical, with elevation turrets, normal objective, eye piece focusing and body tube for mounting. You would be wrong, though, as the Thermion has quite a few tricks up its sleeve. Dimensionally, the XM50 model is 402x78x65mm and weighs only 0.9kg and is made from magnesium alloy with polymer turret covers and rubber repeating focus and menu lead button. It’s fully waterproof to IPX7 rating and shock proof to .375 H&H.

This XM50 model, as the name suggests, has a 50mm Germanium lens that is protected by a flip-open cover that can be rotated to open at any angle and, behind this, is the rubberised focus ring. The central turrets are fake, as the side or windage cap is removed by a ¼ turn to reveal a USB-type charging port (lead supplied) for the on-board, non-removal battery that gives a 3-4 hour run time. The would-be elevation turret is removed and a second APS2 or 3 battery can be installed to double the effective run time. You can also charge these separately on the supplied double charging device.

To the left side, is the main menu button and adjustment or navigation ring as the Thermion is menu-lead, as are all modern thermal and NV devices. On the eye piece, is the normal fast focus ring to get the display sharp, and then on top what looks like the illumination setting on a normal scope are the controls for magnification change, ON/ OFF and record. There’s no charging indicator for the integral battery, but the display shows percentage charge for both. You also get a rubber eyepiece shield for daytime use; remember, thermal can be used day or night, along with a good instruction manual and cordura case.

I charged the XM50 will the APS2 battery in the separate device, which took about 2-3 hours and the onboard battery about the same. The charger shows the progress, but the integral one has to have the display on to see how full it is. With two fitted, the reality is that they will last all night, but they are small and a spare, larger APS3 can be easily carried. The Thermion uses power from the external cell first and then the internal second.

To switch on the display, press the blue button once, this display on all models is the Amoled 1024x768 pixels type, so superb, crisp and defined and frost-proof too. The view will show you have the two batteries in use, if fitted, with the percentage charge above, calibration, magnification settings and terrain type.

The image is crisp and vibrant, and this is in part due to the sensor on these XM models. It is not full HD like the XP versions, but the smaller 320x240 pixel sensor combined to the smaller 12um width means good fine detail is resolved. This smaller sensor arrangement also means the native magnification starts at 5.5x on this model.

This is something that people have been asking for, more magnification. The X button next to the ON/OFF increases the mag and steps up from 5.5x to 11x and then 22x, which is maximum for this model.

To access the main menu, press and hold the side-mounted button and then navigate by rotating the outer ring and press the button again to select. It’s a better system than my Trail to be honest. Menu settings include, manual, auto or semi calibration mode, reticle adjustment for colour and style, of which the reticle is finer for less coverage and the orange colour worked best for me in white or black hot.

You actually have an eight colour palette for detection and, unlike the Trail, where a single press goes from white to black hot, the XM has to go through a few stages to change, which is a shame. Zeroing is easy to coordinate lead or freeze the image mode as other models is easy to navigate on the XM. You can set five zeroing profiles and 10 distance coordinates, so you can change ammo or gun and still stay zeroed.

Adjustment for elevation/windage is 7mm @ 100m per click, so much better than the XP Trail due to sensor size and the total adjustment range e/w is 1400mm at 100m.

PIP (picture in picture) where 10% of the display above the reticule can be zoomed in, is actually a handy feature to keep the main image wide angle and then the superimposed reticule in the PIP is used to shoot with. There is also WIFI and Steam vison for those that want it and you can also take images and store video easily with the third button on the eyepiece.

Focusing is via a normal type scope arrangement, which would be handy at the side, but there’s no room due to the menu controls, but operation is still smooth and accurate. You also have a cant indicator in the form of arrows showing direction, which is actually quite handy when shooting from an odd position.

Now the real test; I started on the 22 rimfire, as I only had a week to play before the Northern Shooting Show. Mounting was dead easy with the 30mm tube arrangement and I soon had the Sako zeroed at 50 yards using the X/Y coordinate adjustments. Switch on or start up is quick and a display off and then instant start up is standard.

The image was crisp, and you can change the brightness and contrast of the display as necessary. Detection range is 2300m and I would not dispute this. Objects giving off a similar heat source such as a bush or foliage was less well defined, but fields, trees, and game all stood out vividly. I used white hot to detect and shoot on black hot, as the image is more defined this way around and I have to say that the orange reticle was perfect for both heat detection modes.

Starting at 5.5x magnification is handy and one press to 11x mag was still clear, I was surprised and pleased, and yes 22x the image became more pixelated. With a native 5.5 x and vermin at closer ranges you have to refocus a bit and field of view is reduced, but for more open terrain and at longer distances, this is what we hunters have been asking for. Build quality is excellent and I really like the overall look and easy controls and more importantly the image quality was superb.

My reply to Thomas Jacks after the test was that I want to buy it! So, that should tell you how much I like this XM50. But TJ has some XP38 and XP50 models coming like my Trail, so I had to give the XM back and now have to raid the piggy bank as I have ordered an XP38 model, they are that good. Plus, they come from a reputable dealer with warranties and direct supply access. The original thermal devices were a game changer, these Thermions have taken the hunting game up to a whole different level, awesome.