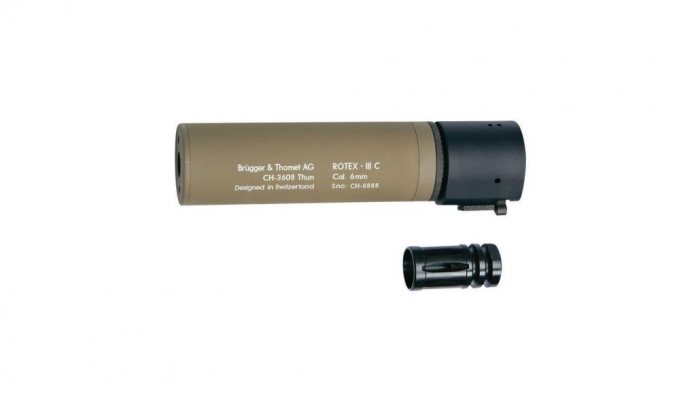 Mock suppressors are a must-have accessory for many airsofters, so Bill Thomas takes a look at the family of Brugger & Thomet licenced replicas from ASG…

Whenever you look at tactical firearms these days it’s rare to see them without some kind of suppressor fitted, and there’s a whole market quite literally just to do with replicas of the most popular models. Whilst the airsoft versions don’t really ‘suppress’ sound they do provide a barrel extension which may allow a short inner barrel to be extended; they also look mighty cool!

Swiss manufacturer Brugger & Thomet AG (B&T) are well-known in the real world for their excellent suppressors. When B&T started in 1991, suppressors were the first product the company produced. Users of suppressors very often needed special optical sights on their weapons, so optical sight mounts soon became a second product line; in some cases such as the suppressor designed for B&Ts own MP9 SMG sight mounting points were even incorporated into the design of the suppressor itself!

Action Sport Games from Denmark are equally as well-known for their extensive range of fully licenced replica firearms and all the accessories that go with them, and they have worked very closely with B&T to bring some superb products to market. There are currently six variants of the B&T barrel extension suppressors in the ASG range and all of them are beautifully put together. All of them carry authentic trademarks and really look very good indeed.

The MP9 barrel extension tube (£48.99) is designed to appear as the QD silencer made by B&T for their popular MP9 submachine gun. Lightweight and with authentic markings, it features a screw-on lock with a ratchet mechanism for a quick and tight fit on the trilug barrel of the MP9. It also features a short accessory rail that allows mounting of tactical equipment like a flashlight, laser or fore-grip.

Designed to look exactly like the ROTEX III silencer made by B&T, this suppressor is a superb addition to an airsoft replica. A clever yet simple plunger lock allows a quick attachment onto the flash-hider which is included in the package; the flash hider features matching grooves and a counterclockwise 14 mm internal thread, so it can easily be screwed onto any barrel that features a matching thread. The ROTEX III comes in two lengths, 160mm and 225mm (the shorter version being ideal for SMGs), and in either length either Black/Grey or Black/Tan. Expect to pay around £49.99 for any of the ROTEX III variants.

Last but by no means least comes the ASG B&T Tracer Unit. This has a 14mm CCW thread, an easy to operate on/off button and a textured outer for easier fitment onto your airsoft replica. It’s powered by 4x AAA batteries (not included), so you can light up your tracer rounds for days at a time! The build-quality is excellent and the test sample I had to look at proved extremely reliable. It works well on both semi- and full-auto and as well as looking like a suppressor it offers that little extra visual fun for night games. The tracer unit is also very well-priced at £38.99.

As stated, all of the ROTEX III models come with a 14mm counter-clockwise flash hider, so if you have a replica with a clockwise or oversize thread (such as the ASG CZ EVO) you’ll need to get hold of an adapter; luckily ASG have already thought ahead though and provide a number of adapters in their range. If you fancy a suppressor on your RIF then the B&T licenced models are most certainly worth a look!