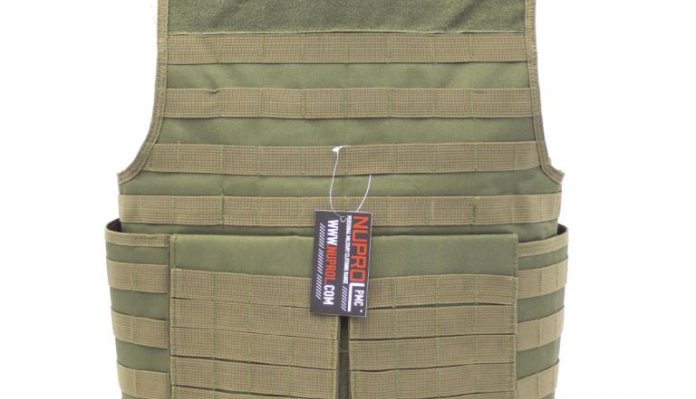 It’s always good to see a brand doing well, and in the case of NUPROL they are not only doing well, but splendidly! When I got a call from Ross Tucker, Operations and Marketing Manager at WE Airsoft Europe I was soon in the car heading round the M25 to go and meet with him; he and the team, the ones I refer to as “the hardest working guys in airsoft”, have really been making some huge steps forward, and mainly with the in-house NUPROL brand; they’ve worked hard, been straight with both the trade and the community and put 100% into giving both UK and indeed international airsofters exactly what they want and need.

When Ross unveiled the plans for the new NUPROL Personal Military Clothing (PMC) range of tactical gear to me, to say I was completely stunned would be a huge understatement. Now, Ross and the team at NUPROL have in the main come from airsoft playing backgrounds and have a good few years’ experience of using kit under their belts. There is however an enormous difference to having knowledge of how the kit works and how you go about putting it together. And it wasn’t just this either; as is their usual style they didn’t just present me with a plate carrier and a few pouches but an entire range with virtually every bit of kit you could feasibly use in it! Utterly stunning!

The PMC range consists of some quality products as the team searched out a highly durable yet proprietary NP1000D fabric to form the basis of everything. They also scoured the market for equally high-quality clasps, clips, zips and webbing to ensure that certainly for airsoft use everything would be fully fit for purpose.

The range itself is currently nice and tight and all the gear is currently available in Black, Tan, Green and ‘NP Camo’ which I can see is going to work excellently with both Multicam and MTP.

The basis of the entire PMC gear system is the PLATE CARRIER. £59.99 gets you one of these cracking armour vests, and there are features aplenty to justify this keen price tag. It looks to me that the NUPROL design team have spent a lot of time looking at a lot of different carriers and then amalgamated many great tweaks into their own. There is quite literally MOLLE everywhere, front, back and sides too so you’re going to be able to load up this bad boy assaulter heavy style! The cummerbund is neatly elasticated for a personalised fit and comfort and one feature I really like is that the central cummerbund closure point is split into two rather than just one big flap; I don’t know if you’ve tried to adjust a plate carrier with just one closure panel but if it’s loaded up with pouches it can be an absolute pain! There are also triple Velcro shoulder adjustments, again to aid in a perfect fit, and Velcro panels front and rear for all your team and morale patches. The carrier is neatly rounded out with a broad webbing drag-handle to the upper rear.

To start pulling things together, the first thing you’re going to need is magazine pouches, and there are several different models to choose from, although they all retail at just £12.99 and will accommodate up to four individual magazines per double pouch; all models of pouch require four lines of MOLLE for attachment. There’s a very nicely put together double M4 CLOSED TOP model (this will also accommodate AK mags) which is spot on if you’re a woodland player and want to ensure that all those costly magazines of yours are safely and securely retained. If you’re more of a CQB hound then you have double OPEN TOP pouches for the M4, AK, and G36; the latter will hold both M14 and HK417 mags at a push!

If you’re a pistol user then a measly £7.99 will get you an absolutely cracking SINGLE PISTOL MAGAZINE pouch; this little gem is completely adjustable and I could secure everything from a tiny Detonics magazine to a whopping SOCOM one with ease!

Shotgun wielder? Again NUPROL have you covered with a really great SHOTGUN SHELL PANEL which takes up six lines of MOLLE but holds up to 18 3x 10 shotgun shells; now that’s a whole lot of ordnance right there. To finish out matters relating to ammunition and magazines there’s a classic roll-up DUMP POUCH for £12.99 too.

A Place For Everything

With ammo sorted it’s on to the allimportant gear, admin, comms and first aid; for £9.99 you can pick up a mid-sized RADIO POUCH which will hold all medium radio models as it very neatly adjustable. I would also say this would make a good, small general use utility pouch or even a holder for grenades. There is one main large in the NUPROL range which takes up five lines of MOLLE; it’s classed as a MEDICS POUCH, but in reality it’s a total jack of all trades, simple and effective and costing, once again, just £12.99.

Last but by no means least is a cracking little ADMIN POUCH – another classic design which is meant to sit centrally on the chest area of the carrier; Priced at, yup, you guessed it, £12.99 it has one large pocket and one smaller pocket covered by a Velcro over which again provides space for team or morale patches. There’s also a small removable pouch included which is great for a smaller pistol mag or multitool.

I used the word ‘stunning’ earlier and I certainly believe that the NUPROL team have once again shown they understand the business of airsoft all too well.

They have created a range of gear that ultimately is very, very affordable, and I’d say it’s a big well done to everyone involved in pulling this range together!