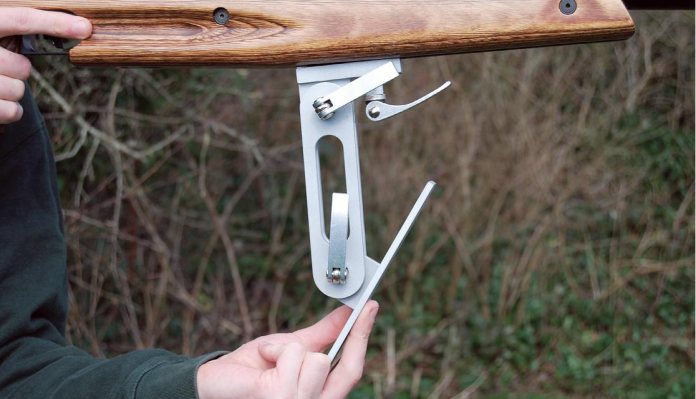 Time was when people shot FT rifles over their arm; some still do, but this is a bit of a leftover from the springer shooting days. With the advent of precharged rifles came the ‘off the knee’ style and the need to raise the forend of the rifle, either with a glove or small bag, with a custom deeper stock or with some sort of platform known (I have no idea why) as a hamster. Now we need to add the adjustable forend or lifter to that list of methods.

On my return to FT last year I quickly became aware of adjustable devices on the underside of some rifles – a lifter. One part of me wonders why it is necessary to have a parallel arm assembly clamped to your FT rifle and the other part wonders why it has taken so long for someone to come up with the idea.

In essence you have a platform of some sort, just like a hamster, this is the point of contact between the shooters knee and the rifle. Above that you have some sort of parallel arm arrangement; there are several different designs available but they all work the same way, with a pivot under the rifle and another on top of the platform. To make the whole thing useful, the two pivots can be locked or allowed to move with a quick release mechanism.

The point? Well, the lifter can be adjusted quickly from sitting just below the stock and parallel to it, to offering over 200mm of extra depth to the stock, sitting, kneeling or standing.

Let’s Have A Look

That’s the theory lesson over; let’s look at the real thing…

Some lifters are heavy, some expensive and some both, but when I saw the design being offered by András Fekete-Móró at Maestro Design, I decided to give it a try. The Adjustable Forend is available in three lengths (pivot to pivot), 205mm, 150mm and the one I have, at 130mm.

Construction of each model is identical, it is just the arm length that varies. The model I have is finished in anodised matt silver, but if you prefer, a black finish is also available.

Mine arrived in two bits, the parallel linkage and the flat plate. The plate has three countersunk holes, so a little forward or backward bias is available to suit your needs. A minute with a screwdriver had them fitted together. The lifter fits into any standard accessory rail; I have tried it on several rifles and it fitted fine. It is slid as far along the rail as you like and then a quick release clamp is pushed closed and it locks in place. Obviously, if you want to move the fixing forwards or back at any time, it only takes a moment to unlock the mechanism, slide the lifter and lock it up again. Adjusting the position and elevation of the lifter is quick and very easy, either moving one pivot or both. I think with practice I may find adjustments that suit each of the three shooting positions, marking each position onto the lifter, so that a quick adjust between lanes will see things set up ready to shoot.

As the lifter is mostly made of aluminium, it is not heavy and came in a 530g on my scales, so fitting it to a 6kg plus rifle is not really going to add significant weight. Once fitted, it is also clear that although there is a tiny bit of side to side movement in the linkages, the machining tolerances are close enough to avoid significant undue movement, this is vital as I can imagine nothing worse than having the rifle wobbling about on top of the lifter… nasty.

So does it work? Well, yes. I used it to transform an excellent shooting rifle with a shallow stock, which was terrible for kneelers, into an excellent kneeling rifle. It made the same rifle much more stable on sitters and did not detract from its performance on standers. Of course, this is exactly what a hamster does and for a lot less money, but then a club mate who is shorter than me and has a different shooting style readjusted the lifter and was immediately able to duplicate my experience, and then another shooter did the same. This for me is the key, not necessarily different shooters using the same rifle, but the same shooter using different rifles, as I can use the Adjustable Forend on my TM1000, my Pro-Target and my Walther, along with any other rifle that has a standard accessories rail underneath. Lastly, or a wet day and on a muddy FT course, the Adjustable Forend ended the day looking as pristine as it had started, so the finish is robust as well as smart.