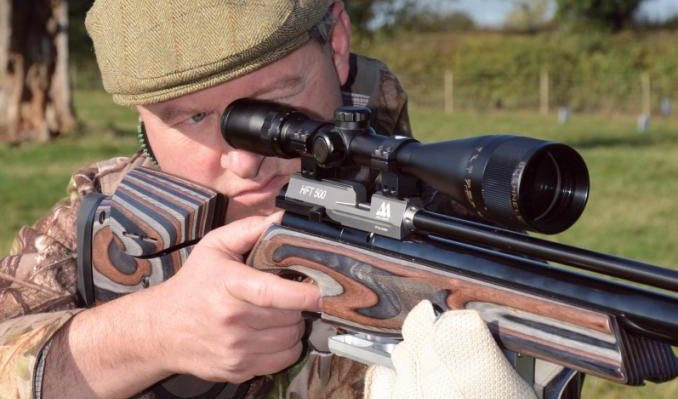 When Air Arms introduced the HFT500 model specifically aimed at the popular sport of Hunter Field Target Shooting, it became an instant success, with orders flooding in from all quarters.

The company’s flagship FTP900 has of course won a hatful of silverware since its introduction, but that beefy 11lbs weight simply isn’t for everyone, so the less complicated HFT500 was the obvious next move; offering the choice of a seriously competitive rifle, in a simplified, more conventional, lighter format.

The combination of a tried and tested power plant, derived from the company’s S400 and side-lever variant S500, and a full length FAC style main cylinder, makes for a superbly balanced sporting tool. A totally floating barrel, quality trigger, air stripper as standard, and a stylish laminate stock, gives this model more than a fighting chance in competition too, so it’s little wonder that significant results in HFT competition have already been racked up.

I competed for several years with an S400 sporting an extended FAC cylinder, so I know how well this configuration balances and feels in competition. The HFT500 has a bulkier stock than many a standard sporter, yet the demands of HFT are such that a raised forend section can really pay dividends in certain situations. We’re not able to sit like FT shooters, so with the prone position the mainstay for ‘freestyle’ shots, it can be a backbreaking affair when course builders push things to the limit.

Elevated targets up trees are often at quite awkward angles, and this can be a real strain on the shooter, to get into a position where the shot can be taken with confidence. Other scenarios see ‘off peg’ shots required, where the shooter may be touching the peg with their foot, yet lying off to one side. In this situation, the aim is made so much easier with a deeper fore-end section of stock to support the lead hand. Someone with a super slim-line forend will soon run out of options, where a shooter with a more target orientated stock, may well be able to adapt to the challenge.

Building this in from the start, as in the FTP900, adds cost and bulk, and for many, it’s too much all round. With the HFT500, it made sense to provide some add-on accessories that would enhance the product, to the benefit of shooters, eager to extract maximum performance in the field. Offering a Palm Rest Kit as an optional extra was therefore the way to go, allowing shooters to upgrade if required.

Turn up at any Hunter Field Target event, and it soon becomes clear that many competitors revel in the chance to customise their stocks, with all manner of add-ons and technical tweaks here and there.

Air Arms’ plan was always to offer some form of stock raiser/ hamster as an option, and the new kit is the result of evaluation and assessment. As a rabid HFT competitor myself, and a long standing user of the company’s products, I was asked to evaluate several prototype versions, and after several consultations and tweaks, and straw polls from the clubs I frequent, the final design was arrived at. My final recommendation was drainage holes in the bottom plate, and I’m pleased to see that these have been incorporated into the final design.

The Palm Rest Kit comprises of the main palm shelf, 3mm and 5mm Allen keys, washers, screws, and two different length extenders. The palm shelf itself is machined from aircraft grade aluminium, and is extremely well finished. Assembly is super easy; with two Allen bolts holding the shelf to the central supports, and just one chunky bolt that tightens the whole assembly into position. Just slacken off the clamping section, slide the shelf assembly onto the accessory rail of the rifle, and gently nip up the bolt head. Slide along the rail to the desired position, and then fully tighten into place with the Allen key supplied once it feels right.

Handling, support and overall feel of the rifle is transformed in an instant, and with some swish detail added at the production stage, along with the company logo proudly displayed on the central support, looks are enhanced too.

I’m rarely disappointed with Air Arms products, and this Palm Shelf Kit is certainly up to scratch, being well thought through, and superbly executed. Bring on the standers!