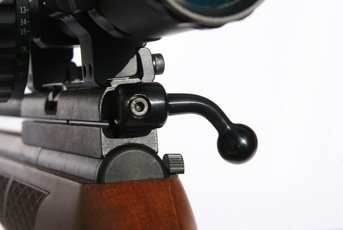 I have looked at some after-market airgun accessories from Rowan Engineering over the last few months and have to say these guys know what they are about. This time around it’s the new cocking bolts for the BSA Scorpion. They’re termed the Ball to Ball and the Ball to Barrel. I chose the latter because it extends further out to the right and has a slightly different profile. So my choice was primarily driven by practicality as it should be.

The original, BSA-designed bolas bolt handle shows a ball at each end of the curved lever. It screws directly into the rear of the bolt body and sits near flush against the action. In use the bit that sits in your hand works well, but some shooters commented it’s not the easiest to pick-up for a quick, back-up shot due to the potential lack of clearance and I tend to agree.

So I chose the Ball to Barrel alternative as the portion of the handle that screws into the rear of the bolt body is drilled, off set to the left, which when fitted moves the whole thing over to the right more. For me it’s now ideal, especially fitted to the T-10, multi-shot Scorpion model, as it’s in your hand before you know it and the cocking movement and feel is very natural and instinctive. This hands on approach allows you to get on with the important job of sight alignment and trigger operation, leaving reloading as a near automatic response.

Likewise on the single shot version too, as though loading is manual and therefore slower by its very nature; you will still gain precious seconds over the original design. These changes may seem insignificant but you’d be surprised the difference that extra 5mm of clearance can make to operation. In terms of material and finishes both versions Ball to Ball and Ball to Barrel you have the choice of black-anodised or all-brass.

Another winner for Rowan, I am talking to them about collaborating on a future project, so watch this space…

BSA Scorpion Ball to Barrel and Bolt to Ball

For: Improves bolt operation no end

Verdict: Like everything they make well worth a look as it offers an edge