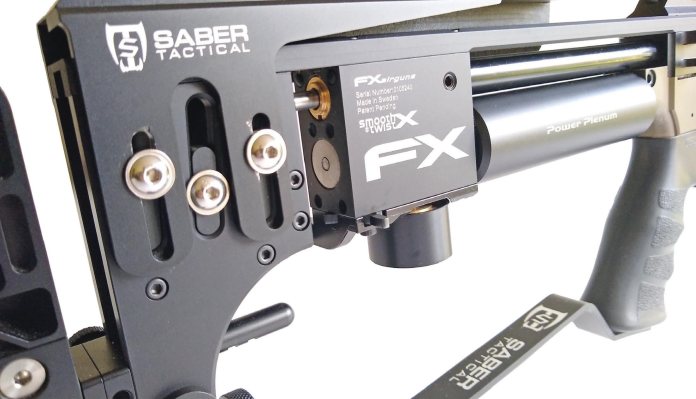 I recently heard someone call the FX Impact ‘the PCP equivalent of the AR15’because of all the aftermarket enhancements available. Here, I take a look at a selection from Saber Tactical, which are distributed in the UK by The Sportsman Gun Centre.

The item at the top of my (left-handed) list is the ambidextrous cocking block. Once installed, this lets you quickly mount the cocking lever on either the left or righthand side. Initial installation takes a lot longer, however, as the barrel, cylinder, optics rail, cheek-piece and top plate all have to come off before you can swap out the original cocking block. Good instructions are available on YouTube, though, and even going cautiously I was alldone in well under 30 mins. The only special ‘tool’ required was a tube of silicone grease.

Next, we come to the adjustable cheek-rest. This uses the standard polymer cheek-plate and the existing cut-outs on the right-hand side of the Impact’s rear frame. A discreet inner (alignment) plate slips inside the frame and is tightened onto it from the outside by a flanged silver screw. Two further screws then pass through an outer L-shaped (riser) plate, through the slots in the frame, and into the alignment plate; being tightened to lock the riser in place once the desired height and angle have been achieved. This is an item worth having if you have a particularly high optics mount.

Rear of the year

Saber’s adjustable buttstock is their most accomplished piece of design and it couldn’t be easier to swap out the factory butt-pad. The chunky rubber treads at the rear provide real grip, which is enhanced when you increase the angle of the upper section so that it hugs your collarbone. You also get a 3-position length of pull (LOP) extension and all the vertical adjustment of the original butt-pad.

Angle adjustment is via a clever sprung lever with a silver stud at the end. Spring tension keeps the stud in one of five positioning holes in the lower section and the outer face of the lever flush with the side of the upper section. So, to change the angle you just press in on the lever until the stud clears its hole, adjust the upper part of the butt plate, then release the lever and let the stud click into the desired hole. Another discreet sprung lever controls the length adjustment, but its action is less positive and a pair of accompanying thumb wheels have to be tightened to eliminate wobble, adding complexity and snag points. Finally, the height of the plate is secured by a single transverse thumb wheel. The plate adds 1.5 - 6.5cm to the LOP.

Overall, the adjustable butt plate looks fantastic and really enhances gun-fit, but it does lack a couple of desirable features, namely a monopod and a sling attachment point.

The bag rider is an angled metal strip that connects the butt to the pistol grip, somewhat reproducing the lower profile of a conventional stock. As well as allowing the shooter to use a rear bag to support the rear of the rifle and fine-tune the point of aim, it provides some protection for the underside of the magazine and the plenum, especially where an extended vertical plenum is fitted.

At the front, the bag rider connects to MkI and MkII Impacts in different ways. For MkI rifles, a strut runs up inside the pistol grip and is secured at the top by the bolt that holds the grip in place. For MkII rifles, a plate is levered into the hole in the base of the grip, which then holds it tightly enough for the bag rider to be screwed directly to the plate. At the rear, the plate does a dog-leg up the side of the frame so that it can be tensioned using the thumbwheel that controls the height of the factory butt pad.

The last major item is the Arca Swiss rail. This replaces the factory part that makes up the base of the trigger guard and the short bipod rail, providing a triple-interface mounting surface that extends almost to the tip of the 480cc air cylinder on my Impact. The rail ends in a narrower Picatinny section with 4-slots. This is two more slots than the factory bipod rail, but it’s still too short for some bipods, such as the Warne Precision model I was testing at the same time. Mounting the bipod further forward gives greater stability, which is ideal when you know where your target will be, but it also makes switching to a new arc a bit slower, so we’re in precision rather than tactical territory.

Behind the Picatinny segment is a wider section with a dovetail profile and no recoil stops. This is the Arca Swiss rail itself. Compatible bipods or tripod heads can be slid freely along it and then locked in the desired position by tightening up a thumbwheel. This is a genuinely swift and versatile adjustment system and really comes into its own when using a tripod mount. Finally, the rail can also be mounted to a Manfrotto-type tripod head via a threaded socket at the rear. You can get a Picatinny-only version, which also has the tripod socket, and save a little weight, but for me, the triple interface of the Arca rail is the way to go.

This isn’t all, though, as Saber also designed in a wider flare around the filler valve. The factory fill port is notoriously tight, so this is good. Even better though is that Saber has doubled down by making extended valve covers and Foster connectors that let you wave goodbye to fiddly filling. So, if you only get one thing, this should be it!

In conclusion, by focussing on internal performance and versatility at the expense of the shooter interface, FX has left the door wide open to innovative creators of after-market upgrades for the Impact, and Saber Tactical have stepped into the breech in spectacular style. Others will surely follow, but there can be no doubt about who is leading the field. My thanks to UK distributors The Sportsman Gun Centre for supporting this review.