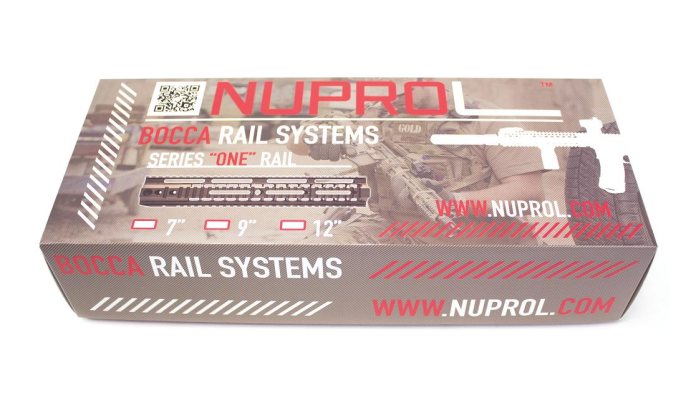 Many manufacturers fit some form of rail system, even to their entry level RIFs these days, but a lot of these are made from plastic or ‘monkey metal’ and don’t stand up particularly well to the regular abuse they see at an airsoft site; after a while, as they are damaged relatively easily, they lose their effectiveness and you’ll need to replace them with something a little more solid.

Rail systems effectively come in two styles, a ‘drop in’ system that uses the existing ‘delta’ ring and front sight plate to hold the rail in place or a ‘free-float’ system that attaches directly to the upper receiver and allows the front sight to be removed entirely. Whilst the ‘drop-in’ option is certainly easier to install, in the real world there are benefits to a ‘free float’ system, which is why you see so many of them. Essentially, on a real rifle or carbine a sling, or anything else that places forces or additional mass on the barrel, like a heavy ‘A Profile’ front sight unit incorporating the hand guard, will change the barrel harmonics during firing. A change in harmonics means a change in point of impact.

By free-floating, you can get the same point of impact regardless of how you stabilise the rifle, so long as nothing touches the barrel like a sling, foregrip, bipod, or firing from a barricade rest. It also means that you can use whatever setup you like such as a taclite, laser, taclite and laser combination, or sling mounts without changing the point of impact for each combination, as the accessories will not place forces on the barrel. You could argue from a ballistic point of view that the same could be said for a RIF, but I have to say that in general terms you’d be pushing things a bit; free-floats just look great!

As players themselves, the team at NUPROL have all gone through the process of externally upgrading their own RIFs and the net result is that they recognised the market really needed a great quality but well-priced family of rail systems for different length builds, and in their inimitable style they went about creating yet another range of superb products. After much to-ing and fro-ing with their factories to ensure that stringent quality control checks were in place, the BOCCA family of rails was born.

Within the BOCCA range there are three styles of rail, all built from excellent quality metal, with three lengths in each style. You can also have each and every model in either black or a very tasty ‘SF Bronze’ which personally I think will be insanely popular!

Ross at NUPROL told me that they’d chosen the tone of the ‘bronze’ very, very carefully to get exactly the right ‘look’ and in my mind they’ve succeeded superbly. All of the rails also come with all the fittings you will need to attach it to your RIF and stabilise it, and all the correct Allen keys are included as well; effectively all you need to fit your chosen rail is in the very attractive box!

The Series One rails are a very attractive free-float system that comes in 7-, 10- and 12.6-inch lengths. The accessory rails themselves are very well defined, with all placements points highlighted in white, so that you can easily tell top, bottom, left, and right, as well as length. The top rail extends all the way, so that you end up with a contiguous system, which exactly mates with, and extends the rail on the upper receiver. The Series One also has three attachment points for a QD sling stud; I added a WEAE stud, which holds extremely solidly. The rails come complete with two steel barrel nuts to fit AEG and GBB guns and also include all mounting hardware and shims as required, so no messing around when it comes to fitting them!

Series Two rails come in 7-, 9- and 12- inch lengths and are a little lower profile and ‘mil’ looking than the Series One. Once again everything is very, very well defined and the markings clear. The top rail extends to meet the upper receiver rail again, but the Series Two also benefits from left and right anti- rotation lugs. Fitting is slightly different to the Series One (I’ll explain this in a moment…) in that a plate replaces the barrel nut and ‘delta’ ring and the rail itself bolts directly onto that, giving a really solid attachment point. The rails come complete with two steel barrel nuts to fit AEG and GBB guns and also include all mounting hardware as required.

Series Three BOCCA rails are unique in that they are what I would call a ‘semi drop-in, semi-free-float’ system. Although the profile is similar to that of the Series 2 rails, S3 versions fit directly onto the existing fittings, so there’s no need to remove the barrel nut! The rail simply plugs in and is secured using screws and anti-rotation studs to give a firm attachment; you don’t need to rely on the support of the front sight, so that can be removed if you like. Once again the top rail is extended to run over the ‘delta’ ring to form a continuous top-rail. The Series Three rail is also available in 7-, 10-, and 12-inch lengths.

Once again NUPROL have really come up with the goods as airsofters for airsofters! We all like a great, high-quality rail system and the BOCCA models really fit the bill in that respect. The seven-inch Series Three rail starts in Black at just £39.99, with the Series One 12.6-inch in Black at £49.99 (expect to pay a little more for the bronze versions) which is just absolutely tremendous value for money for a beautifully finished, full metal rail. I think NUPROL have got yet another winner on their hands with the BOCCA rails and if you’re in the market for a new one then I urge you to check them out!