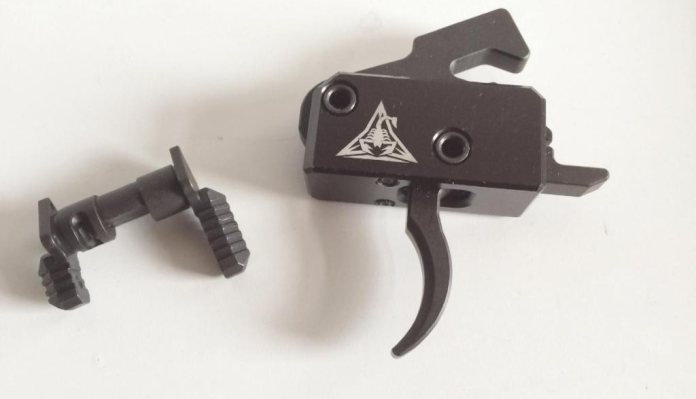 In the gun world, we generally perceive the term ‘go faster bits’ as a mixed metaphor for accessories that might add performance or just cosmetics. I prefer the term ‘performance enhancers’ as to items that will, in the right hands, make the rifle perform more efficiently, which is much more the ticket! North West Custom Parts (Wayne Titterton) is a regular name in the magazine and specialise in both rimfire and centrefire AR15s, along with a wide range of accessories and upgrades.

Over the last year, Wayne has concentrated on a wider range of kit that will not break the bank and do the same job as some of the more expensive producers of add-ons. I’ve two more this month, both being far more practical than fancy! First up, and beloved of us all, is a drop-in trigger unit; no more mucking around with hammers and sears etc.; just remove the safety, bang out the two cross pins and drop it in! This one is from Rise Armaments, who offer a range of units; on test is their RA140 Super Sporting Trigger (SST).

This is what we are told: the RA-140 SST is a high-performing, cost-effective upgrade to replace mil-spec triggers and assembled according to strict AS9100 aerospace requirements, which are more stringent than standard gun manufacturing requirements.

I put it in my S&W M&P 15/22 and 223 Rem SGC Speedmaster and it worked equally well in both rifles. No new trigger pins are included, so use the old ones! As advertised, the pull went to 3.5lbs and offered a lovely crisp break, equally the blade felt good under the finger. Given some more expensive units can cost the thick end of £250-300, then at £125 the SST is a bargain!

I have never given much thought to ambidextrous safety catches on ARs but converted to one last year and am glad I did, as they offer that bit better operation on the right side, which helps at times. Trinity Force offers their ambi unit, which is no different in principle to the rest, but the shape is good. The pointer is triangular with the lever being ribbed; the one on the left is full length with the right being shorter.

It comes in two pieces, with the left also mounting the axial with a slot in the end that a peg in the right hand paddle fits in and it retained by a grub screw. It looks good and does the job and at £25 is hard to resist.