AR15 forend round up 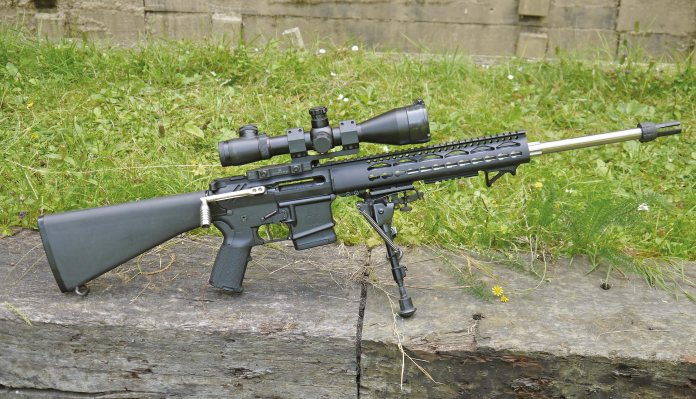 Last month I did a Product test on the Odin Works 12.5” KMod free-float forend and it got me thinking. My latest AR15 is from Southern Gun Co and a full military A2 spec: 20” barrel, proper iron sights and the round/ribbed plastic forend and triangular butt. I opted for a flat-top receiver so I can fit optics.

I soon realised that my dream AR was a bit limiting. Fortunately the AR15 is a movable feast in terms of how you set it up; equally there’s little true gunsmithing involved as you would find on a custom bolt-gun. So with a basic knowledge of tools and how to use them you can do it yourself. The major exception is the barrel as it needs re-fitting with a torque wrench set to 40 ft/lbs!

Apart from a decent trigger, which is an article to come, the biggest improvements is to free-float the barrel. Most AR shooters tend to go for a heavier barrel for greater rigidity. I use an H-Bar; it’s heavy under the handguard and fluted to save weight and medium up front. Floating requires the barrel to be completely free of the forend, which as we know will improve performance and shrink groups.

In the early days things were simple as the free-float was just that a basic, round, hollow, aluminium tube with perhaps a QD bipod stud at 6 o’clock. My original Speedmaster wore a Hogue rubber, overmoulded unit! However, over the years the twin spirits of fashion and function have intervened. Some inspired by military requirements, others by competition shooters and hunters.

For many years the gods of TACTICOOL demanded that a forend had to have four, full-length, Picatinny rails at 12, 3, 6 & 9 o’clock, to which you could/had to add every conceivable bolt-on goody. I’ve been there and I’m sure you have too! Lights, lasers, grips, off-set mounts, red dots; need I continue? So much crap that what started out as a reasonably handy rifle turned into a monster. It’s almost like if you had a bare section of rail then you weren’t doing it right!
Another practical problem with 4-way forends is they are uncomfortable to hold as the transverse slots cut into your hands. So what do you do; buy plastic rail covers, go fi gure! It’s not to say the Picatinny system is bad, as it’s universal for mounting and even the KMOD system offers sections amongst other accessories.

In recent years KMOD and MMOD forends have appeared, which offers a smooth surface with multiple attachment points so you can consider if or what you want to put on! Size and shape have altered signifi cantly too, as has weight and you can get some pretty light yet rigid examples to suit all manner of barrel lengths and requirements.

I was speaking to Wayne at NWCP about this and he suggested he send me a selection of more modern forends to test; he also included an original fl oat tube for comparison. Here’s what I got: Trinity Force 12” with bolt-on Picatinny sections and their 10” M1812 KMOD, Odin Works 12.5 KMOD and 12.5 Sport and a 10” Spikes Tactical SAR 3. Regardless of other fitments all show an integral, full-length Picatinny rail at 12 o’clock.

In all cases fitting uses a modifi ed barrel nut though how the fl oat tube attaches differs, as we shall see! Strength and rigidity are important considerations for a heavy barrelled rifl e especially if a lot of bipod use is expected! Depending how your base rifl e is confi gured you might need an AR wrench which offers both C and pin spanner functions for barrel removal/installation, also a large 1.5”+ spanner.

Something else I learned is that all these forends are designed for the standard, Mil-Spec AR upper receiver. My new SGC Speedmaster has a fl ange at the front, which on the left acts as a securing slot for the L/H cocking slide and all of the fl oat tubes have small anti-rotation/stability lugs that slide over the sides of the receiver. Which in every case would not go fully on. Wayne told me that if a customer orders a heavy receiver then he removes the tabs.

The 12.5 KMOD is seriously light at 6oz, by comparison the plastic A2 forend with alloy heat shields is 8oz and an original fl oat tube is 13oz. It’s round in section with an ID of 1.75” and a height of 2” including the 12 o’clock rail. KMOD slots are positioned longitudinally at 3, 6 & 9 o’clock. Rear left and right are holes for QD sling swivels and you can also fit these into all the KMOD holes too. The 12.5 Sport is identical though it offers threaded holes to fit Picatinny sections instead and QD sling swivel holes two front/rear.

Included are a gas hole alignment pin and a short section of Picatinny rail that you put where you want. Also the forend adaptor and barrel nut along with a tube of Vibra-Tite thread lock, Alan key and fi xing screws. With the barrel fitted slide the adaptor down and screw it onto the barrel extension as far as it will go so the hole in the top aligns with the gas tube hole in the receiver. Insert the alignment pin to index everything. Put some Vibra-Tite on the barrel nut threads and leave for 15 mins then wind it down to 40 ft/lbs and remove the pin (pliers might be required). Finally slide on the forend, locate the six screws and tighten it all together. Odin Works 12” KMOD at 6oz it’s very light

The 10” SAR3 weighs 6oz too with an ID of 1.5” and a top to bottom of 2.25” and shows ambidextrous front and rear holes for QD swivels and 5 x longitudinal slots at 3,6 & 9 o’clock, a section of Picatinny rail is included. Fitting is by a replacement, one-piece tube adaptor/barrel nut, shims, tools, LocTite and slim rail covers are included. This like the Odin slides the tube over the barrel extension, which is secured by 4 x 2 screws at 12, 3, 6 & 9 o’clock. To align the nut correctly Spikes supply a series of washers and the nut is tightened up so it fi nishes with the block for the gas tube at 12 o’clock.

Trinity Force uses a friction grip system, which to my mind is simpler and easier; you get a replacement, extended barrel nut with a hexagon end for a spanner. This screws on and doesn’t need aligning, the float tube has a split clamp at the rear at 6 o’clock, this is loosened and the tube slid on, aligned then tightened. There are two options here a round tube at 1.35” ID and 2” high weighing 10 oz with three screws on the split clamp. Three different length Picatinny sections are included and Trinity can supply more. The P1812 is a KMOD and triangular in section with just two screws for the clamp. It weighs 11oz and offers a maximum width of 1.75” and is 2” high and comes with 2 x Picatinny section of KMod rail, plus Alan keys and spare screws. Both forends show anti-rotation tabs.

On reflection I prefer the fitting system of the Trinity Force, though I do like the light rail of the Odin Works and also the whole KMOD system. As I’m changing my A2 around I decided on the Trinity P1812 but in a 12”, as the flat base to the forend is good for resting and the triangular cross section offers a good grip too. All I have to do to suit my Speedmaster’s non-standard upper is remove the small anti-rotation lugs. Odin Works also offers a selection of accessories, all of which are of use. There are two, low-profile Harris bipod adaptors one suits KMOD the other Picatinny along with a small hand stop, which I find very useful for off-hand shooting.

Fitting of all forends tested was easy with the caveat of the barrel needing torquing up to the required foot poundage. All proved solid and rigid in use and addressed the needs of light weight as well as heavy duty use as to their lights. This was just a small selection of what is available, so shop around to see what else there is. Contact: NWCP, 0161 408 1155