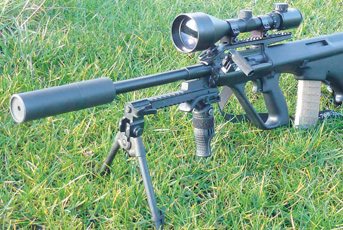 You may have seen Rob Ireland’s report on his Armalon Custom AUG straight-pull rifle in the February issue of Shooting Sports. It had an LSW-type long barrel and an extended forend accessory rail. Shortly afterward Peter Sarony of Armalon contacted me to say that he had developed a shorter rail that would bolt onto the AUG in place of the factory folding handle, and that would be available off-the-peg.

As it happens, this is a modification I’d already investigated, and I discovered a number of alternatives. None of these are without their issues, as areas like price, weight, fitting and getting the damn things in from the USA are all deciding factors. So the news that Armalon has a better-spec, UK-made alternative, will be music to the ears of British shooters. The ArmAUG rail is very well made (from 7075 aircraft-grade aluminium alloy), true to spec, and has a finish that laughs in the face of, well, pretty much everything!

But why fit a rail at all? Simple, really: it lets you mount a bipod without fitting it directly to the free section of the barrel, thereby leaving the harmonics unchanged. Also provides room for an aftermarket vertical - or angled fore-grip (VFG/AFG), or a sling point. In addition, a short 45 or 90° low-profile accessory rail (also available from Armalon) can be fitted to the upper part to take a tactical torch, laser sight or illuminator. All in all, then, a forward rail makes a surprisingly big difference to what one can do with the rifle.

Fitting the Armalon rail is a genuine 5-minute job, once you’ve taken off the factory folding grip! Equally adding the optional bipod spigot or sling stud is as easy as lining up too holes and tapping a roll pin in to keep everything in place. The result is a totally-secure, play-free fit. Also you’ll only have to fit the rail once – I guarantee you won’t want to go back to the factory grip.

DOES WHAT IT SAYS

The ArmAUG rail offers about 2” more rail space when compared to the competition and a couple of inches more than if you mount your bipod to the spigot. I dug out an old hybrid AI/Versapod to do the honours there. I did wonder whether the extra length was really necessary, but it will be beneficial to the fitting of a Magpul AFG.