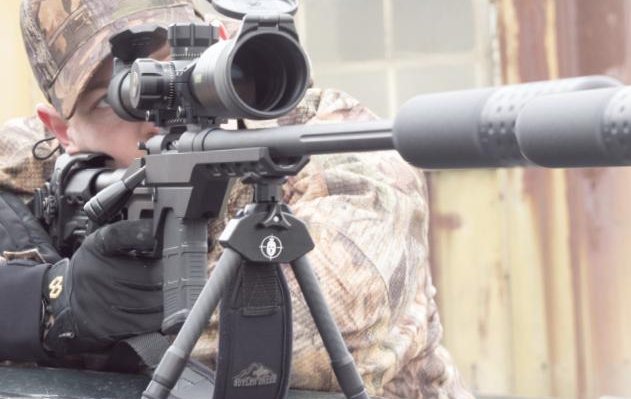 Back in 2015, I purchased my first centrefire rifle, a Mossberg MVP Varmint bolt action rifle chambered in .223/5.56mm. When I chose the Mozzy, I knew that due to its success in the USA, there would be a selection of upgrades on the market, some even offered as part of package from Mossberg themselves but at the time I could not afford them. So, moving forwards, and having put a good 1600-rounds through it, sure enough I have slowly but surely craved more and more accuracy. That initial requirement of one-inch at 100-yards is a distant memory! This article is about my pursuit for more accuracy and just how much difference can I make to it?

It wasn’t that long ago that a rifle that produced groups under two inches was deemed as acceptable by hunters, and rifles that shot MOA or below, were deemed the crème de la crème among the shooting fraternity. Now, manufacturers are able to make 1-MOA accurate rifles straight from the box but this is still difficult to do when trying to keep the costs down. This of course leaves areas in the construction that can benefit from aftermarket components…

The first option, if you are serious about accuracy, is to fit a highquality barrel; after all, those fitted at the factory are manufactured to a price and the quality is represented to a degree by the cost of the rifle. However, rebarrelling is a very costly exercise and to top it off, it is only worth doing if the action is of a decent quality, which may rule out some budget guns, such as mine! If you are re-barrelling your current action, then it is definitely a waste if you haven’t shot out the barrel you already have! Having had a few quotes for getting mine done, there were none under £700, so this option was out for me at this time. I will revisit the idea when I have worn out my barrel, as I can imagine that it would be very exciting to spec the length, twist rate and profile to meet my exact requirements.

Every mass-produced rifle stock is designed to fit a broad a spectrum of people and body shapes and as a result they rarely fit anyone perfectly. Mine was no different, and as soon as I started to use it, I began to notice its shortcomings. Firstly, the length of pull was just far too short, making it difficult to be comfortable when getting behind the rifle and created issues with correct eye relief! A quick and easy solution at the time was to get a butt extension fitted, or so I thought! Time passed and after putting more rounds through it a second issue arose. When trying to shoot groups, there was clear evidence of vertical stringing as the barrel got hot. After a bit of research, and asking around, I found out that this problem often points toward a bedding issue. This was backed up by the fact that if I applied pressure with my thumb to the barrel then it would move!

So, for those who don’t know, bedding is the process of filling the gaps between the rifle’s action and the stock with a compound. The idea being that this creates a precise fit between the two, leaving no slack, thus making sure that during recoil and movement the action does not move around, or when someone presses down on the barrel! It is worth noting at this point that I was advised that bedding was by no means guaranteed to solve my problem, so spending between £150 and £300 (depending on technique used) seemed a bit risky to me, especially considering my stock was far from perfect. The next option would be to purchase an aftermarket stock from someone like McMillan, but unfortunately none of these companies offered inlets for my MVP and getting a custom build from scratch was financially unviable!

The solution to both my problems turned out to be an LSS chassis from Modular Driven Technologies (MDT) and it really does have a lot to offer. All their systems are manufactured out of billet 6061-T6 aluminium, which obviously gives them great strength and rigidity. They are designed so that you can just drop your barrelled action in and voila! The LSS offered up a V-shaped bedding area and a free floated forend. So, straight away, that was the end of any bedding issues! This particular chassis system then allows you to attach either an A2 (full length) or CAR15 (short/ length-adjustable) AR15 buffer tube, along with a hinge if you want a folding stock and an AR15 pistol grip of your choice.

You can then wade your way through the thousands of AR15 butts and grips on the market and essentially spec your rifle to your exact ergonomic requirements. Before rushing into buying a new grip and stock, I spent some time with a standard A2 pistol grip and a basic collapsible stock from my S&W M&P 15-22. The idea being that I would be able to identify what I wanted from each component when the time came to upgrade it. For example, I found the A2 grip worked well when kneeling or standing but when in the prone position it was poor, as very little of my hand was actually in contact with it and I had to distort my hand and grip to get a consistent trigger finger position. After a lot of research, I opted for an Ergo flat top tactical grip for £43.50, which turned out to be a perfect choice, filling the hand well and allowing perfect trigger finger positioning; all in all, highly recommended!

Plenty of research went into my choice of butt, due to my previous issues with length of pull. I opted for the luxury of a CAR15 buffer tube, which allowed me to adjust the length of pull, as it’s a telescopic design. This is useful when shooting from all the different positions or from a vehicle. The butt I chose was the Fab Defense GL, with MBA (Mono-pod buttstock add on), which also included an adjustable cheek-piece as well. I can tell you that it is a real luxury being able to make adjustments to meet your requirements and a huge perk of this particular setup!

Triggers are important, as they represent a direct interface between user and rifle and directly affects the disturbance to the aim and therefore the fall of shot. A good mechanism will break crisply and predictably, allowing the shooter to remain consistent and call the shot each time. The best makes have their internal components made from high-quality materials, machined to very fine tolerances and include the ability to be adjusted to a desired weight. Unfortunately, manufacturers who are building affordable rifles cannot fit their products with the best and consequently, a lot of factory triggers leave a lot to be desired.

As a result, upgrading a trigger is by far one of the most popular accuracy upgrades and there is a huge market for them, hence why companies like Timney and Geissele exist! With prices ranging from £50 to £200 + they are affordable too. I opted for an adjustable single stage unit manufactured by Timney called the Mossberg Short Action Trigger. This particular unit was around £150 and was adjustable from 1.5- to 4lbs and took less than five-minutes to fit! I can categorically say that this was a significant stepping stone to improving my ability to get the most accuracy out of the MVP and I can’t recommend these upgrades enough!

I’ll leave it there this month, as there’s still a lot of ground to cover. But that’s the basics of my upgrade, what I would describe as the nuts and bolts of the job. As you can see, the base MVP looks very different from the rifle I have created; gone is that thin, horrible laminate stock. Shooting Sports Editor Pete Moore who tested the original/unmodified gun has watched me slowly build my rifle to my personal spec and has told me more than once how impressed he is with what I have done; praise indeed!