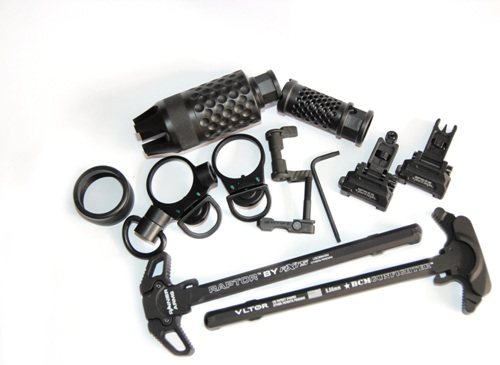 In the world of AR15s Wayne Titterton’s North West Custom Parts (NWCP) is rated as one of the top custom builders. To achieve this and apart from the basics – barrel, upper and lower receivers etc there are a host of accessories. Though too many to test, Wayne sent me a selection down, which I thought I would showcase and cherry pick the more interesting for future issues.

Two muzzle brakes; the first from Barking Spider, which is a wide drum-type with small internal chamber and vents with a slotted external flash hider, which can be removed and a simple cover ring fitted. Probably good for very short barrels where muzzle blast is at a premium. Second the Spikes Dynacomp 2. Long and slim this multi-port cage-type shows twin rear facing vents doubtless to reduce recoil, both are threaded 1⁄2 x 28 UNEF and Spikes include a shim set that allows you to align the brake for best effect.

The standard T-handle is not ideal for easy or fast operation but there are a number of extended versions that give a bit more heft and control. Plus if you want to keep the gun looking authentic then maybe worth a try. Two here are the Rainer Raptor and BCM Gunfighter, which are near identical being ambidextrous as the twin handled levers are hinged and pulling one side operates the other, plus there’s a lot more to get hold of, which is never a bad thing.

Some shooters like the option of iron sights, if so Spike’s offer a compact set of fold downs. These fit to the gun’s Picatinny rail, with the front unit offering elevation by an integral wheel and the rear a height and windage-adjustable aperture.

Again from Spikes the tactical latch plate, which fits at the junction of the lower receiver and buffer and offers a single point attachment for a tactical sling. Two here; the basic unit with a single hinged loop that a snap clip can fit to. More exotic is the Enhanced model that features the same hinged loop but with left and right sockets that can accept a small, QD, D-loop for easy ON/OFF mounting.

Extended controls are very much in vogue with two options here. First the Spike’s Ambi Safety Modular, which replaces the standard left side unit with a secondary lever that screws on from the right. Second the Norgin Inc Ambi-Catch, which replaces the actual magazine locking/ engagement locking catch that offers a unit that can be pushed from the left of the mag well.