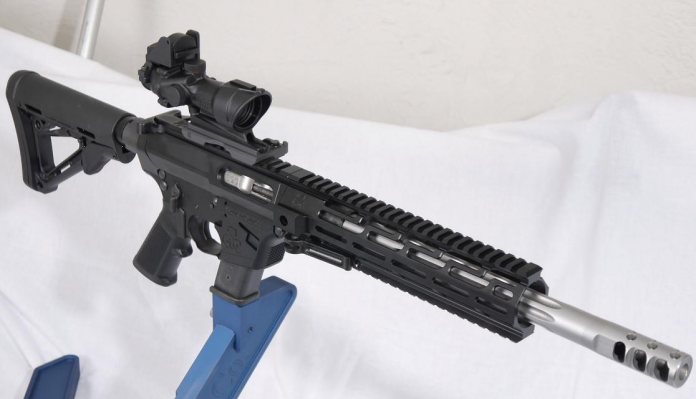 Let’s face it; we AR owners love to dress up our guns and SGC’s QD Rail forend seems like the ultimate accessory. I tested a pair of their Mk II 9mm LR9s, one had the standard round forend and the other the QD. At the time I said yes it looked cool but did not seem to have much function on this blow back design. I could see its point for the LR223 as it uses a gas/piston mech, which needs to be accessed for cleaning.

However, on reflection it occurred to me that perhaps the forend does have a value outside of the LR223 on normal straight-pull ARs. CNCmachined from aluminium alloy and black anodised the build is skeletonised and can handle barrel diameters of up to 1”. There are two versions - 10 and a 12.6”, both are based on the former with the latter having a separate, 2.6”, 4-way, bolt-on nose section.

The rear (10”) section shows full-length Picatinny rails at 12 and 6 o’clock, with the sides (3 and 9 o’clock) being plain. Though there’s a short, 3”, Picatinny section rear/left and a 1” dovetail (no slots) rear/right. Both are machined for plunger-type, QD sling swivels. The forend includes a replacement barrel nut, as the original has to be removed and the new one screwed in and torqued up; not something to be done without proper AR tools!

With the new barrel nut fitted the forend slides on and a pin, at 12 o’clock in the rear face, aligns with the gas tube port in the upper receiver. Underneath is a sprung plunger that locates in a slot in the barrel nut. Retention is achieved by an adjustable tension lever on the right/ rear that pinches the split end of the forend onto the nut. The end result is secure and offers a true ON/OFF facility! Weight-wise the 12.6” version adds a hefty 1.5 lbs to your rifle, which is significant!

So what good is this rather Gucci accessory? Most immediately it allows access to the exterior of your barrel to keep it clean and rust –free. It also allows a more modular approach to accessories, for example if you had a 223 Speedmaster straight-pull you could buy a 12.6” version and use the shorter, 10” rail fitted up with a vertical grip for maximum control. Then if you were to go foxing re-fit the 2.6” extension to mount a light and laser along with a bipod adaptor slide. Conversely if you had the money get two separate forends pre-set up for accessories as I have detailed.

In use the rail proved its promise, as it offers a solid QD ability which retains the free-float 100%. I found the finish very aggressive and would definitely get some rail covers for the Picatinny sections.