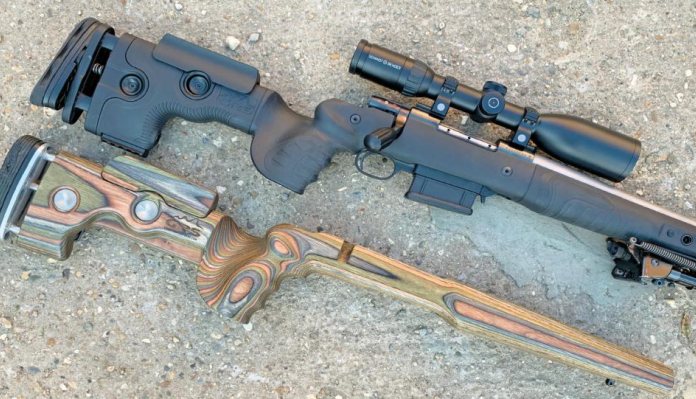 I fi rst became aware of Grodas Rifl e Stocks (GRS) when I was looking for a stock for my original 6.5 Creedmoor custom built on a Weatherby Vanguard chassis. I wanted something a bit adjustable, of medium weight and shootable. I was not too concerned about weight, as it was to be less of a walk and stalk package and more of a sit and shoot. I tried a number of Howa 1500 stocks, as they share the same action footprint as the Vanguard, but nothing really suited. Quite by chance, a friend of mine said; ‘why not look at what GRS has got, as they make some good stuff’.

Never heard of them, but I’ll give it a try. I saw their Sport Varmint and knew I’d found what I wanted. This medium heavy build was made of quality laminate and showed a number of aspects that would fi t my needs. The butt has push button (SpeedLock), height-adjustable comb/cheekpiece and the same on the back end for length of pull (LOP) and came pre-fi tted with a Limb Saver recoil pad. The underside was cut away to offer a gripping hook for supported use. The pistol grip was scalloped out like a thumbhole, less the top strap with a thumb-up hold and offered a 6, right hand off set that, as I discovered gave probably the best fi ring hand/wrist position I have ever used. Finally, the deep forend allowed for a 100% free fl oat. I got my gunsmith to pillar and synthetic bed it and I was very happy. Today, this has been replaced by the Sport, which is an improved version

There are now nine stock options that offer both laminate and modern synthetic builds, most using the original butt layout with a new SpeedLock 2 adjustment system, to cater for all needs. The fi rst synthetic was the Berserk, which was very much a Sport made of a glass fi bre reinforced material. Similar, but improved and on test is the Bifrost (Rainbow Bridge); having now used both, I prefer the latter.

It’s slightly lighter than the Berserk and Sport at 1.35Kg, 1.38 and 1.4 accordingly and makes more use of rigid polymers in the adjusting systems as opposed to aluminium. It also as standard has a height and angle-adjustable butt pad, something I usually associate with target guns and never really considered viable on a fi eld or hunting rifl e. However, once used it adds yet another dimension to the stock, that makes for the perfect fi t.

This rigid build shows rubber inserts in the pistol grip and forend sections that really do the job in all conditions. It comes with a single, short Picatinny rail that can be fi tted at 3, 6 and 9 O’clock on the forend tip or under the butt to accept a monopod. Removed you can fi t a QD sling stud at the 6 O’clock for a Harris-type bipod, there is also a socket in the nose for mounting the spigot-type VersaPod system. Plus, there are three sockets (two on the forend tip) and one under the butt for QD swivels.

The action void is strengthened by integral cross bracing on the interior sides, with front and rear cross bolts for more integrity. The action screw holes are VERDICT bored oversized to act as pillars. I get the impressions that it might not be wise to drill them larger and fi t aluminium types or try to synthetically bed either. Saying that, the action slides in nice and tight with no movement when bolted down to the recommended 5.2 nm (Newton Meters) of torque.

The SpeedLock 2 system differs by the fact that the buttons can be pushed through from either side to unlock and lock in the middle position; I did fi nd at times them very hard to operate. However, once set, they are fi rm. LOP with a ½” Limbsaver pad fi tted is 35 - 38 cm and the comb movement, 30mm top to bottom. The butt pad is pulled out to slide it up/down and rotated to change angle. For me, it conformed to the shape and angle of my shoulder pocket perfectly. In use, it proved comfortable and, more importantly, eminently shootable too.

The Bifrost is available in olive green, brown (actually a rather horrible yellow) and black and a left hand option too. I fi tted a Legacy Sports box mag conversion kit and had no problems with feed or function. GRS offers a number of accessory options; Versapod spigot, Picatinny rail 2-pack and covers, bag rider and spigot adaptor.