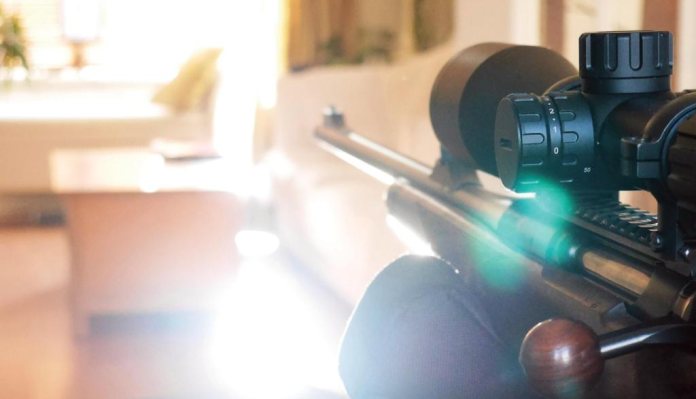 This laser training system was one of my favourite discoveries at this year’s British Shooting Show. Designed in Norway, it is imported and distributed in the UK by Edgar Brothers and was demonstrated on their stand throughout the show. Inventor and company director, Ole Norstad, talked me through the system and kindly gave me a sample to try out at home.

The core system is beautifully portable and storable, packing down into a smart black Monopolysized box. At its heart are a light-sensitive screen and a laser chamber insert. The screen is Bluetooth-enabled and about the size of an iPad (267x208x28mm), but lighter. The laser insert works like a snap-cap, being activated when the firing pin hits the dummy primer. Target and laser are linked via a sophisticated but intuitive smartphone app.

Also supplied are a folding tripod and power cord for the target. Options include a wide range of chamber inserts for popular cartridges and various alternative target faces that simulate standard 100m or 200m competition targets scaled down for use at either 5m or 10m. Check out the company’s website for a full list. For the test, Ole provided inserts for .223 Rem/5.56 NATO, .243 Win/.308 win, and 6.5CM; and 100m DFS roundels scaled for 5m and 10m, plus a reindeer target scaled for 5m. (DFS “Det frivillige Skyttervesen”, is Norway’s NRA.)

Dry-firing practice with inert snap caps is a good way to familiarise yourself with the balance, trigger and sights of your rifle, but isn’t ideal for identifying or correcting bad habits, and quickly becomes dull. By contrast, the Accurize system gives detailed graphic and statistical feedback that really helps you to improve the accuracy and consistency of your simulated shots and delivers a much more enjoyable and engaging experience in the process.

The first thing to do after installing the app is to create profiles, first for the shooter and then for each rifle/ cartridge to be simulated. Data for each shooting session can then be stored within the corresponding profile for future reference. The next step is to set-up the target. Attach it to the tripod via the socket in the base, or hang it on the wall using the keyhole slots in the rear; slide a target face into the frame; plug in the power cable, and press the ON/OFF switch to activate the Bluetooth connection and link the target to the app. Once the connection is made you are ready to shoot.

The laser inserts come with 3x LR626 hearing-aid batteries installed. Before use, unscrew the head of the dummy case to remove the small black isolator disk that keeps these fully charged. Keep this safe to re-use when storing the system for an extended period. The only other preparation required is lightly greasing the o-rings that centre the insert in the chamber to facilitate extraction after use.

I started with my Heym SR30 .308. The insert chambered smoothly, and dry firing produced a red laser flash downrange. The 8m distance between the alcove of my living-room window and the French windows in the dining room was ample for a 5m practice range.

I set the target up on the windowsill and turned the dining room table into an ad-hoc shooting bench.

The app provides three shooting modes: Auto Sight Adjustment (AST), Test and Recording. AST is an essential first step with each rifle, because the point of aim is matched to the point of “impact” (a.k.a. zeroed!) digitally rather than by physically aligning the laser. In AST mode, you aim at the target and make the best shot you can. Keep going until you’re happy, then end the calibration.

The app will compare the position of the laser strike to the known position of the target centre and incorporate the offsets into the rifle/ target profile, where it can be tweaked if needed. Initially, I was disappointed that the laser doesn’t coincide with the centre of the reticle, but it’s actually easier to concentrate on follow-through when there’s no flash to interrupt your sight picture.

You can now choose another mode. “Test” lets you shoot strings, and obtain data from them, without adding this to the permanent record. Use the app to set the length of your shot string, select a scoring system, and choose a sound to accompany each shot: from a simple electronic beep, to the booming report of a hunting rifle. (Top tip: use headphones to enjoy this option to the full without risk of divorce!)

At the end of a string you can review the data, seeing each shot on the zoom-able target image within the app, either as a precise point, or via a neat “heatmap” function. This displays the group as a multi-coloured nebula that gives an immediate and intuitive sense of any trends; a tendency to snatch the trigger, for example. Numerical data is also generated, including the time between shots.

Once you’ve got the hang of the Test mode, you can set yourself the more serious challenge of shooting for the record. The procedure is the same, but the indelibility of the record (you can only clear it by deleting the entire profile it belongs to) creates a very different mind-set, as you challenge yourself to beat your previous performances.

Shooting from a rest tells you a lot about the dynamics of your rifle’s trigger, and about your own powers of co-ordination and concentration. And because the chamber inserts are rimless (the insert is removed after use using a cleaning rod and patch), you can also practice how you operate the action after shooting. Nevertheless, it is when you set rests and bipods aside and move on to shooting from sitting, kneeling and standing that you really see where the work needs to be done!

Formal 3-position shooting is specifically catered for with a target featuring three sensors placed at appropriate heights, and a variablespeed moving-target kit will soon be available that presents a bi-directional running boar or moose target on a 1.5m track. I can’t wait to give it a try! Both targets are also designed to pack down into an easily portable and storable box.

The only issue with what is otherwise a faultless system, is that most hunting scopes cannot be focused down to 5m, or even 10m, resulting in parallax error at these distances. Consequently, any variation in the position of the shooter’s eye relative to the scope can cause dispersion within a string of otherwise perfectly aligned and executed shots, or mask errors in a less-than-perfect string.

The laser/Bluetooth will work at over 20m, and in dark or overcast outdoor conditions; so – space permitting – increasing the distance between the shooter can mitigate the problem. Alternatively, Accurize offer solutions in the form of an inexpensive 3-9x32 PA scope with a minimum focusing distance of just 3m for practice, and special restricted-aperture lens covers for standard scopes. The first solution makes sense if your main optic has a reliable return-to-zero mount or you can check zero before your next live hunt or match. The second is more convenient, but as the inserts are still under development and thus unavailable for this test, I can’t say how they perform.

Accurize has produced an attractive system for dry fire practice based on digital and physical components of a very high quality. The system also scores highly on practicality and affordability. You can use it as a competitive training tool; as a means to improve your shooting from field positions; as the basis for informal competitions with fellow shooters, or simply as a fun, safe way to introduce others to shooting. Only in the more serious of these applications will parallax become an issue, but the lack of a definitive solution may be regarded as an Achille’s heel. So, look out for new developments from Accurize, especially their new moving-target kit!