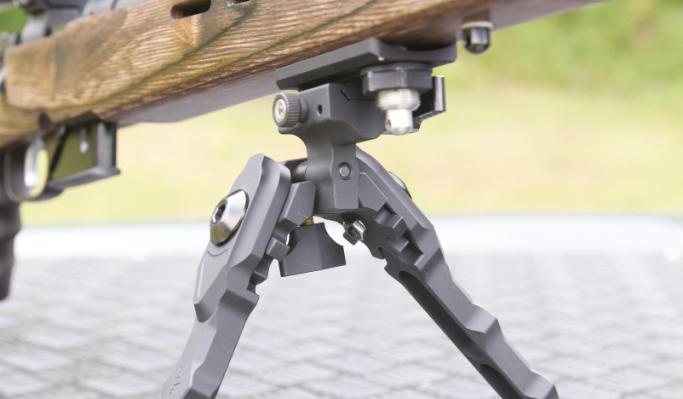 I got my first Harris bipod in Canada in 1976, it was their long leg, HB25C model. Up until then, I had only used pods on military light machine guns, like the L4 Bren and GPMG, but the HB25C with its 13.5-27” adjustable height legs was bought for a purpose. In this case, for my Remington 788 in 243 Win for shooting on the grassy Alberta prairies, as most shots were sitting, and you need both height and support. But as my sports shooting experience grew, I soon realised what a useful accessory any bipod is and over the years I’ve tried a few makes and models but settled on the Harris BRS (bench rest swivel) 6-9”. As a general use pod, I still consider it the best there is, not too big or heavy, good stability and with a useful cant ability.

It was not until 2014 that I saw something with other possibilities, the Javelin Ultralight; very different from my BRS, but a clever and simple system for a hunting rifle. I now have a couple for my Mauser M03 and Blaser R8 and they fulfill a purpose and I thought I was sorted, but no. The acquisition of a Bergara B14 HMR 24” in 6.5 Creedmoor recently, for longer range precision work got me thinking again, which coincided with the arrival of an Accu-Tac BR-4QD pod from Optics Warehouse.

Accu-Tac offer nine different models for a range of firearms, some aimed at the big .50” calibres, there are two BR-4s, both of which unusually have fixed-length legs, which initially seemed a bit of a disadvantage. Both attach to a Picatinny rail, with the major difference being the 4QD, as the nomenclature suggests, is a quick detachable design, whereas the other bolts on.

Made of high-strength, type III, Mil-Spec, aluminum alloy anodised matt black, it’s a solid and efficient design with a few surprises. The inverted, V-shaped yoke the sprung legs rotate on has five positions per side. To deploy, you pull the legs out against the tension and rotate them to one of the five notches, which give vertical, horizontal (stowed forward and back) and 45°forward and back in parallel or individually. Sounds a bit odd but in use it offers an interesting and surprisingly practical alternative. Legs end in small, rubber feet that screw ON and OFF; Accu-Tac offers optional spikes to increase the 4QD’s ability to cope with all surfaces.

Both BR-4 models offer cant with a large wing nut set in the underside controlling tension, which is big enough and easy to adjust from the firing position. Mounting on the 4QD is by a Picatinny claw base with an adjustable throw lever to give an easy ON/ OFF ability. Plus, depending on your needs, it can be mounted forward or back without influencing access to the tension nut and offering left or right lever position. This however, pre-supposes that your rifle has a Picatinny rail, which not all do!

Accu-Tac have this base covered with two systems, most basic is the Picatinny Rail Mount # PRM-100. Essentially a section of rail with two counter-sunk holes, compatible wood and metal screws are included. For example, on my B14, I could remove the QD forend stud and drill a secondary hole and secure using the machine screws, just needing to countersink the inside and Nylock nuts.

More convenient, the Sling Stud Rail Adaptor # SSRA-200. This offers a wider/ longer mounting plate with an integral Picatinny base and sling stud adaptor. An extended and externally threaded stainless QD stud pins to the one on the rifle, then the mounting plate slips over the top and is secured by a large nut. I had my doubts about its integrity under firing stress, but it seems to do the business. Though more hassle to fit, I’m going with the PRM-100, as it’s lower, more secure and unobtrusive.

As a control, I used a Harris BRS, you must remember that forend depth will play a part in overall bore line height; for testing, I measured to the point of contact on the forend from the ground. The BRS is 6” (minimum extension) and the Accu-Tac 6.75”, however gape (leg angle/width) differs at 6.5 and 9” accordingly. At full extension, the BRS is 9” and in this position stability is reduced a tad. Weight is 13oz and 17 oz accordingly.

In use, the Accu-Tac scores in stability, as it feels dead with near no movement, the ease of adjusting cant tension is good, as is its ON/OFF QD system. To be honest, I don’t think I’ve ever needed to extend the legs on my BRS more than a few times and that was only one or two clicks. On the bench, the Accu-Tac can feel a tad high, but it’s still useable. However, by folding them at 45° you can drop the overall height to 5.75” with no appreciable loss of stability, even though the gape reduces to 6.75”. Plus, this ability gives some leeway to your firing/support length position, forward or back.

Two small negatives, one – the rubber feet are small diameter and do not cope well with soft ground and two – they also get loose easily. I was in two minds about the Accu-Tac, but now having used it I think it’s going to be the one for the Bergara in its more static shooting role and my Speedmaster AR15! For me it’s a bit too bulky and heavy for my hunting rifles, but maybe not for you!