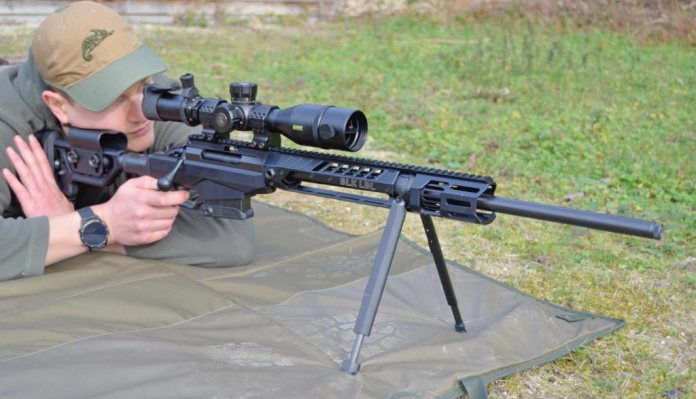 Having used a wide variety of bipods, which all support the rifle and do the job, I have found that choosing the correct one can significantly increase consistency and decrease group sizes. Rather than take the that’ll do approach, I recommend trying as many as possible. Personally, I always have one fitted, but that does come with some disadvantages, like increased bulk and weight, plus it uses up valuable forend real estate, which could alternatively be used for resting on a barricade, positioning shooting sticks or for offhand shooting. However, if you own a Tikka T3X TACT A1, Sako TRG or Ruger Precision rifle then GMK Ltd is offering a new option: The BLK LBL.

The BLK LBL is not a normal bipod, instead, the build shows an AR-type, 2-piece forend which is connected together via a one-piece Picatinny rail at 12 o’clock and a bottom brace at 6 o’clock. The latter shows five M-LOK slots, allowing the attachment of a barricade stop, weights or a tripod adaptor etc. There are also some additional accessory slots around the forend’s tip and a QD flush-cup on each side at the base. The unit is manufactured from durable anodized aluminium and nitrided steel. It is 35.5cm long, 5cm wide and 6.4cm high. It shows a two-tone black finish, a solid, high-quality build and weighs in at 726-grams.

The bipod system centres around a precisely machined ball and socket joint, integrated with very tight tolerances, into a 1” gap within the forend, 4” back from the tip. It is, of course, hollow, to allow the barrel of the rifle to pass through it and remain fully freefloated, to aid accuracy, this ‘barrel-through design’also promotes stability. This impressive joint operates in a very fluid/smooth fashion and from what I could see, there was little to no grease lubricating the joint. This helps reduce the attraction of dirt and grit which could possibly seize up the joint.

The joint provides 15° of pan and 40° of tilt, which makes the LBL suitable for use on uneven terrain. This is a clear advantage over other integral bipods, which are often completely fixed, such as the one found on a Steyr Scout. Tension is controlled via a slotted aluminium cylinder positioned in front of the joint. With the tip of the forend pointing away from the user, the cylinder is rotated counterclockwise to loosen and clockwise to tighten. Both extremes have been judged very well, however, when fully tightened, a reasonable amount of force/grip is required to loosen the system off.

Two triangular legs are attached to the base of the ball (their pivot point) and each one is attached with a Torx bolt. When not in use, the legs are stowed to the rear, sitting flush, with beautiful precision, into a machined cutout on each side of the forend. There is a slot big enough for a finger as well as a strong 2.5cm magnetic strip above each leg to provide some extra resistance, preventing accidental deployment of the legs. In the forward position, each leg is 20.5cm long and locked by a textured, metal, sprung tab on the ball, which also adds a bit of resistance. Incidentally, the tabs only have to be pressed when stowing the legs and not when deploying them. Each leg includes a textured rubber foot for extra grip, and on the back of each one (facing the shooter) is a sprung tab, which is used to control height adjustment in five 1.9cm increments, so a maximum leg length of 30cm, which is plenty.

For the test, I attached the LBL to my Tikka T3x TACT A1. I removed the original forend, as per the instructions, then loosened and removed the barrel nut clamp screw from the LBL and carefully placed it over the barrel. Be careful when doing this, as the magnets built into the forend will pull it towards your barrel, increasing the risk of scratches. Once in position, I replaced the clamp screw and tightened it up to 70-80 in/lbs as per the instructions. Simples.

I used the LBL while shooting off a bench, from the prone position and even off sticks. The latter helped highlight the benefits of having less weight up front and an uncluttered forend, something that I really liked, and the point of the whole system. It’s certainly a strong advantage over traditional bipods. Although deployment is remarkably smooth and quiet, it is tricky to deploy both legs at the same time and you end up doing one at a time. This combined with the fact that you cannot pre-set leg-length makes for a slow deployment, which won’t suit everyone’s requirements.

I also found that because the tensioner is positioned right up at the front of the forend, it is not easily accessible without breaking from your shooting position. However, it is easy to find a happy balance of tension and movement then pre-set it, which worked OK for me.

On the plus side, when shooting, the barrel-through design certainly feels good, it is very hard to describe, it just feels better. The rifle is not sitting on top of a support system like it normally would, but rather in it. This helped to add another layer of stability, which is after all the whole point of a bipod! I also noticed that the legs allow about 3mm of forward/ backwards movement, which allowed me to load the bipod slightly, a nice touch.

Overall, I like a bit of innovation and really appreciate what BLK have done with LBL. If you have a compatible rifle and are after an integral bipod for it, this is well worth your consideration. It is aesthetically pleasing, well made, easy to fit and practical too. Not cheap though!