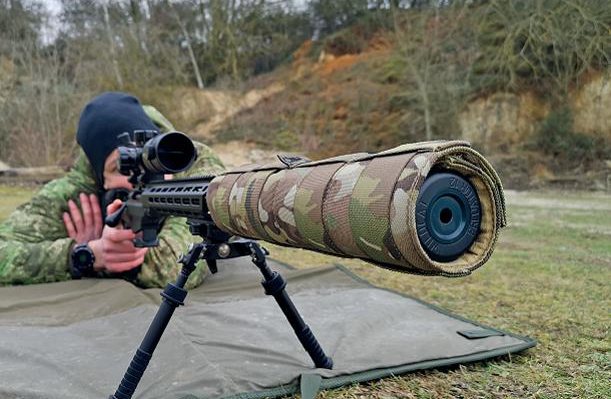 If you are looking for a new bipod, then you cannot afford to ignore what is on offer from B&T Industries. The American company manufactures the legendary Atlas bipod which has firmly established itself as one of the most popular rifle supports on the market. The range is extensive and includes the V8, PSR (Precision Sniper Rifle), 5-H, CAL and Super CAL bipods, ensuring there is something for everybody!

On test is the Gen. 2 CAL (Cant And Loc) Atlas bipod, which I specifically chose because it was developed for shooters, like myself, who do not want the panning feature. For those who don’t know, this is the ability to swivel the rifle horizontally from a fixed position, say if you were following a moving target. In use, I have found that the capability to pan just adds a layer of instability to the rifle when trying to shoot tight groups, but this is just my personal view!

The bipod is manufactured from 6061-T6 aluminium and is Mil-Spec Type III hard coat anodized to a very high standard, which will help keep rust and corrosion at bay for many years to come. Importantly, the LW17 variant that I have includes a quick-release Picatinny clamp, which allows me to switch the bipod from one rifle to another without any tools. Not all Picatinny rails share the same dimensions, so it is worth noting that the width of the clamp can be adjusted (no tools) to suit. Alternative options include a low profile, two-screw Picatinny clamp assembly and a ‘No Clamp’ model, which can be attached to a variety of clamp setups that share the same hole pattern.

The clamp is attached to the leg assembly via a solid cylindrical pin which is designed to allow the CAL to cant up to 45° in either direction. Tension is controlled by a rear-facing KMW Pod-Loc, which provides effective leverage for fine adjustments. It is spring-loaded, so when pulled to the rear it allows the user to rotate the lever out of the way without making a tension adjustment. All in all, a well-proven system.

The BT65 Gen. 2 CAL shows a generous 9–12.5” footprint (which is greater than the standard V8) which strikes a good balance for practical-type shooting and range use. To achieve this, B&T has simply connected the QR clamp (via the cylindrical pin) to a 6cm long horizontal bar, thus spreading the legs apart.

The legs of the Atlas are an engineering masterpiece. At each end of the horizontal bar, there is a notched half-oval metal segment which the legs are bolted to. On each leg, just below the bolt, is a sprung push button that allows the user to select a notch, adjusting the angle of the legs to 0, 45, 90, 135 or 180°. Operation is smooth and precise.

The main internal legs show regular notches at 0.75” intervals, which, when combined with the available angles, gives an adjustment range of 5.1 – 9.4”. These work in conjunction with a sprung, knurled collar that sits at the top of a non-rotating sleeve that houses the inner leg.

Adjustment is easy, simply grab the outer sleeve, use any available finger to pull down the collar, then move the sleeve down to the desired notch/height and release.

Although expensive at £300, I only had to handle the Atlas BT65 Gen. 2 CAL for a few minutes to understand why. The fit, finish and quilty are simply fantastic. I like the small details, like the knurled surface on the leg sleeves, the removable rubber feet (see accessories in tech spec), the 360° collar which can be reached/operated from all sorts of angles and even the O-ring at the top of the inner legs, which stops dirt ingress.

After using the bipod for a while, I grew to really appreciate the ability to adjust the leg angle and their height to suit a wide variety of scenarios. These two adjustments combined gave me the ability to fine-tune the bipod height so that it worked in perfect harmony with my rear bag to give me tight groups down range. Yes, it’s just a bipod, but it’s a bloody good one! A+ from me.