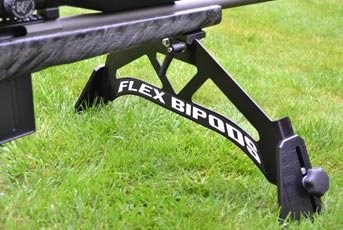 The growing surge in club level and international competition in the F-Tr disciplines has led to a plethora of new accessories for the keen competitor to use. Fox Firearms have likewise been keen to look at new ideas that offer the ideal solution to newly encountered requirements, but some are so alternative in concept, they epitomise the idea of `thinking outside the box`.

The Flex Bipod from Dan Pohlabel is a seemingly wacky design that has intelligently solved the main difference between F class and F-Tr, an attached `bipod` rest that allows the gun to `track`. Pohlabels creation has been CAD designed and fully computer modelled as a bipod that although rigidly attached to the gun, can flex in use under recoil. This allows the gun to track in a straight line with the butt resting on a firm rear bag. During initial assembly the bipod attaches via a locknut to the underside accessory rail on your gun, cant is enabled by a single locking handle underneath and the overall height of the rifle can be adjusted using the slotted feet. The CNC machined aluminium feet grip the ground firmly with aggressive teeth yet their subtle curvature allies with the inherent flexibility of the 2.2mm aluminium centre, allowing the gun to both recoil over 2 inches without the feet moving at all, yet at the same time, the curve on each foot allows them to `roll` with the shot to maintain a reassuring `return to battery`.