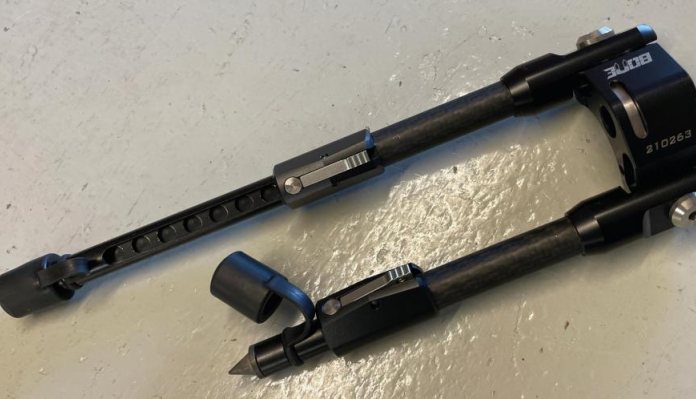 Back in the day, if you wanted a decent bipod you went out and bought some form of Harris Engineering model. Their Benchrest Swivel (BRS) with 6-9” adjustable-length folding legs, base with lockable cant facility and QD scissors clamp was about as good as it got. I now have three and rate them as the best, general use pod ever designed, attested to by the plethora of inferior copies that the market has become infested with. Yes, there were other designs, but not really in the same class or more importantly, ability!

In 2014, I think, everything changed, as a then-unknown company called Spartan Precision Engineering launched their Javelin bipod system. This lightweight design made use of modern materials like carbon fibre and titanium and used a revolutionary, magnetic attachment system. No longer did you need the pod on the rifle all the time, just push it in or pull it out, with no buttons or catches to operate.

Spartan went on to expand and refine their system and also produce more dedicated models for long range shooting and other needs, plus military work. They also designed pods for Blaser, Sauer and other companies.

Pete’s got the bone

Doubtless, this set the tone for future bipod development from many other manufacturers and on test today is the latest system from an Austrian company called H.M.S. Präzisionstechnik GmbH.

Being British, we are known for our ribald sense of humour, so when I was told the new pod was called the Bone, well, I had to smile. I guess the irony is lost on the Austrians. Speaking to the importers, RUAG Ammotec UK indicated that H.M.S. said the name alludes to the strength of a backbone, not in the UK it doesn’t Mein Herr! No matter, what you have here is something, in my opinion, that’s partly influenced by the Javelin and other sources too, but what’s on offer is, without doubt, a clever and practical system.

The design uses carbon fibre, stainless steel and hi-grade aluminium alloy. It consists of a mounting yoke that the legs not only hinge on but in certain positions, articulate around, which as we shall see is quite useful. Taking a lead from the Accu-Tac design, they can fold forward and back to stow parallel with the forend, or at 45º, which drops the height and also moves the point of ground contact nearer or further from the shooter, as required. Plus, you have the main, vertical position too.

Attachment is by a horizontal spigot, a bit like the old VersaPod, that is positioned under the front of the forend. Here, the yoke has a mounting socket that slides over the spigot and is retained by a spring-loaded catch, for fast and easy removal and replacement. However, unlike the VersaPod, which had a big and ungainly polymer hand stop, the Bone offers seven different mounting options, as to forend types.

At the base of the yoke is a thumbscrew that is used to tension it on the spigot, so you have a decent cant ability that can be as tight or loose as you need. The more modern bipod systems normally incorporate a bit of traverse on the mount, which gives you the ability to track targets or conversely bring the rifle to bear on it. The Bone does this in what I initially thought was a bad bit of design, but further use proved it to be rather clever.

With the legs deployed vertically, they feel a bit wobbly but inspection and use showed they were spring-loaded and the movement present was deliberate. This, then allows you to traverse 200 from the central position, once on target, pushing forward or pulling back slightly locks them solidly in position. So, you are covered for both changes in target angle and cant - neat!

The legs are sprung as well as prenotched and are extended by pushing in the locking catches, where they automatically spring out and have to be manually returned. The adjustment length is 7.5” (stowed) to 10.5” fully deployed. Even at the minimum 7.5”, I did find them a tad high, with any bipod, Harris BRS-excepting, which is 6” at its shortest, they all feel a bit too tall.

The feet are rubber and they can be slipped off, but are retained by straps to reveal very aggressive looking spikes, which can cope with different surfaces. Both are Spartan Javelin features. Weighing in at a pleasing 270-grams, the Bone is not heavy. It is exceptionally well built and after a bit of time, I really started liking it!

OK, the Bone is a cool looking and practical design, but what puts the icing on the cake are the versatile mounting systems, and you get the choice of seven options. All use the spigot as described but in different ways.

First up is the Picatinny adaptor which weighs 72-grams. It shows a one-piece build that clamps onto any Picatinny rail positioned under the rifle’s forend. The next one is M-LOK. This is again a one-piece design weighing in at 48-grams and will suit rifles like AR15s etc. Plus others with free-float forend tubes. Near identical in looks and application is the KEYMOD version (45-grams). Then there’s the Universal Adaptor, which weighs 48-grams. This can be screwed directly into any wood or synthetic forend.

So far so good, then you have two sling swivel QD stud adaptors for European (6mm) and US fittings (8mm) at 53-grams apiece. They fit via a cup that’s pinned over the QD stud, with a rubber pad underneath, the adaptor is placed on and a big nut is wound down to secure it all. And finally, the Blaser R8 converter, with this rifle the spigot replaces the sling swivel in the tip of the forend.

As a Blaser R8 owner, I use their Carbon bipod (Spartan-type) in the modified, replacement forend cap and have to say I prefer the Bone system, which offers greater rigidity and adjustability and an equally easy, ON/OFF system.

RUAG supplied five of the seven mounting systems - Picatinny, M-LOK, both QD stud adaptors and the Blaser spigot. Three proved solid and secure, but the QD studs got loose all too quickly and I reckon H.M.S. need to re-think that one!

The price is right?

What with us leaving the European Community and the general rise in the cost of living, the price is not inconsiderable, plus the adaptors are extra. The Bone alone costs £270 and the adaptors as follows: Picatinny £84, M-LOK, KEYMOD and Universal £59, QD stud £90, and the Blaser R8 one is ironically the cheapest at £57.

Not trying to justify the cost, but you have to consider that the one bipod can be adapted to any number of rifles. So, given the artillery I use then, I’d get the Picatinny and Blaser adaptors and fit Pic rails to my Remy 700, Benelli Lupo, Tikka T1x and Ruger M77/17 All-Weather. This way, I would be fully covered and just chop and change as required.

Out of interest, I compared the Bone to Spartan’s ProHunt TAC bipod, which is a similar design and at £329, it’s more expensive. Looking at their adaptors shows similar prices, some up and some down a bit. Truth is, these and others like it are high-end systems that offer a lot and it’s down to you, to decide if they are value for money given your needs. To put it in a bit more perspective, my favourite Harris 6-9” BRS is now nearly £130, when I bought my first one, which I still have, it was under £60 as I recall.

Would I get a Bone bipod and adaptors? Probably, yes!