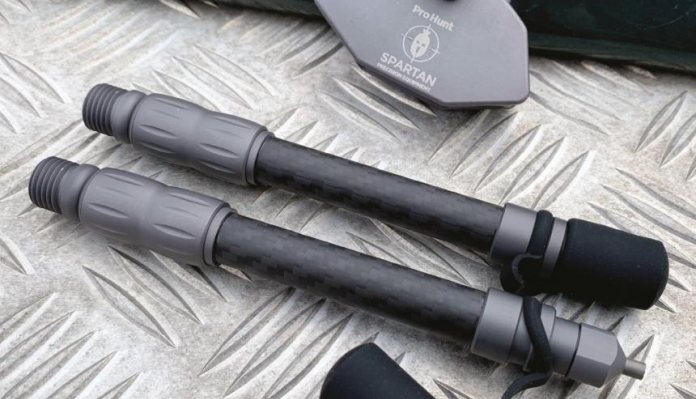 As you might recall, Spartan Precision Equipment sent me some of their latest innovations a few months ago, which I looked in brief and detail. They also mentioned a new bipod variant of their Javelin system called the Pro-Hunt and the Weiner Sucker mount. Well, I now have both of these for your delectation!

The Pro-Hunt could be termed as; ‘the same, but different’, as unsurprisingly it uses the winning Javelin bipod formula of light weight, yet strong components combined with their unique and patented magnetic attachment system. Let me explain to the uninitiated; conventional systems are physically anchored to the rifle; using a Picatinny rail or sling stud. Good enough, but in both cases have to be unclamped to remove. The Javelin uses a socket that’s permanently fitted to or in the forend by a steel screw and a magnetic spigot that sits on top of the pod, so literally just plugs in and stays where it is, so can be removed or fitted as required. This saves both weight and bulk on-rifle.

With sliding leg sections to give height adjustment, combined rubber and tipped feet, lockable cant and limited traverse, it’s both simple yet sophisticated. However, the current design had a few short comings, in the light of user feedback and continuing development, which the Pro-Hunt seeks to address. This ongoing improvement is a hallmark of Spartan’s success, as we have seen the Javelin refined and reimagined over the years.

As I see it, here’s what’s different. The leg sections are now all carbon fibre and extend from the top and not the bottom, so reducing the chance of getting debris inside. Locking is by a rotary collar, as opposed to having to rotate the whole lower leg. Taking a leaf from their new Lite range, they now screw into the top section (yoke) which makes production of both Standard and Long models easier. The dual-role feet remain the same, with pull-off rubber boots for general use, that expose Tungsten Carbide tips for harder surfaces, like rock etc.

In the original design, one leg is fixed in the yoke and hinges for storage, a possible problem was instability with the chance of the rifle falling over. The Pro-Hunt’s yoke now incorporates a lock that engages as the leg deploys, to give a rigid platform; however, a simple press of the catch allows it to be stowed. The spigot section hinges left and right to allow cant and the new tensioning lever is shorter and can be repositioned to offer maximum force as required. As before, the limited traverse is accomplished by the mount and given the way the pod is positioned (forward or back) also locks out for a more stable position.

Dimensionally, little has changed; figures below are for both Standard (S) and Long (L) versions, the only marginal trade-off is the earlier Standard weighs 5.22oz, which is negligible.