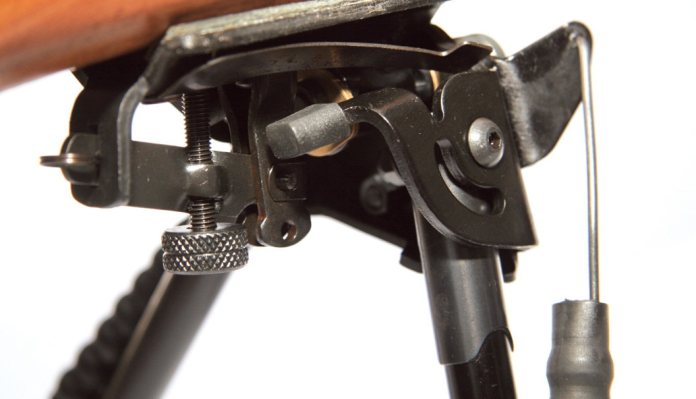 Manufactured with heat- treated steels and hard alloys, this black anodised bipod is very well-built, robust-looking and weighing only 1lb won’t disrupt the balance of your rifle when shooting ‘off-hand.’

The oblong-shaped ‘Pro- Tilt Base’ section attaches to the forend sling swivel stud by two ‘lugged arms.’ These extend upwards through the base, allowing the lugs at the top to engage at either side of the front sling swivel stud. Once in position, the knurled edge thumbscrew found front underside is turned clockwise until the bipod sits flush with the rifle. Two strips of hard rubber on the upper side of the base prevent metal-to-wood contact to protect the woodwork.

As the name suggests the bipod has a ‘tilt’ facility allowing instant levelling for taking a shot on uneven ground. Judging the amount of shift, I’d guestimate it allows approximately 45-degrees of side-to-side movement – possibly amongst the largest amount of travel found on any bipod. To prevent it ‘flopping around’ when the rifle is being carried there’s a ‘Tilt Screw Lock’ at the rear of the base. Equally importantly it allows you adjust the tension to the tilt facility for a more positive feel as you tilt the rifle to avoid cant as you adjust your aim when using it.

The ‘Pro Tilt’s’ legs extend from 9- to 13-inches (a 6- to 9-inch model is also available) and are infinitely adjustable along this travel due to the ‘Multi-Position Locks’ found just below the push in ‘Lock Release Catches.’ This is pretty standard-fare on this type of kit but the legs do seem much easier to adjust than on certain other models and lock in position very securely by the figure of eight headed design locking screws. A nice bonus is the unique shape of the adjuster lock screwheads makes them easy to use even in cold weather with numb fingers or wearing gloves. The lower section of the adjustable legs are spring tensioned and are fitted with a generously sized hard rubber boot.

The legs are secured in the open or closed position by external springs that, if exposed as is often the case on many other models of ‘pod’, can get clogged with dirt, mud, and when getting into position the coils can sometimes snag on ground cover. Also, on certain models the springs are audible as they stretch out as you deploy the bipod. All these problems are eliminated by what are termed ‘Noise Reducing Spring Covers’ – thick- ribbed rubber sleeves that are clearly seen ‘shrouding’ the coiled section of the springs, the ribbed design ensuring they snugly fit around them and don’t move out of position.