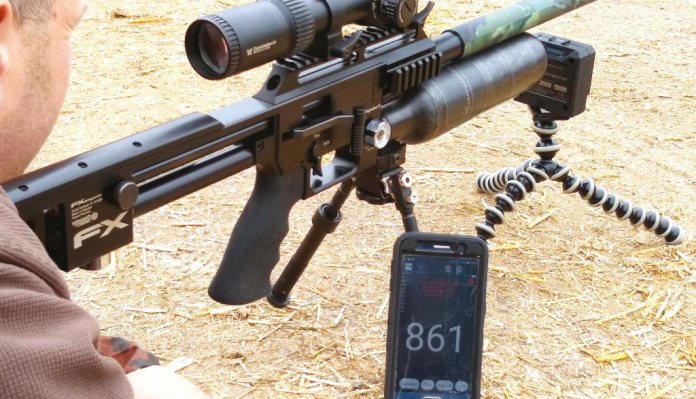 FX Airguns of Sweden are leaders in pushing the envelope of pre-charged pneumatic (PCP) design. On their flagship guns, the Impact and Crown, expert users can tune every aspect of the pellet’s internal ballistics for the optimal combination of velocity, energy, consistency and stability. This last can be judged by eye and measured on target, but velocity, energy andconsistency require a chronograph. So, they decided to produce one; the result is super small, easy to use, surprisingly affordable, and predictably cutting edge!

The chronograph market has traditionally been dominated by optical models (Caldwell, CED, Chrony, Combro, ProChrono) that use the shadow cast by a projectile shot over a pair of light sensors to measure its velocity. As anyone who has used one knows, function depends entirely on having the right kind of ambient light and shooting over the chrono can all too easily lead to it being damaged or destroyed.

However, there are alternatives. Steinert Sensing makes the Superchrono, which uses acoustic sensors to track the sound waves from the projectile. Magnetospeed has their V-series, which works via electromagnetic induction, and Labradar has produced the first ever system based on Doppler radar: basically, a speed gun for shooters!

Acoustic systems work well with noisy cartridge rifles, and electromagnetic systems thrive on jacketed projectiles, but both systems struggle with something as quiet and inert as a lead pellet fired from an airgun. Only Doppler offers reliable tracking. FX clearly understood this, but they also realised that an airgun chronograph could work within much narrower parameters than were required for firearms, enabling them to design a unit many times smaller and cheaper than Labradar’s.

The result is a little black box, measuring just 2.8” x 1.7” x 2.7” and weighing a mere 160g (including the 3 x AAA cells that power it). At the back is an ON/OFF button and two LEDs: green for ON, and RED for low battery, plus a battery compartment secured with a small screw. Underneath, there’s a female tripod thread set into an anti-slip pad; and on top is a curved channel that indicates how to align the barrel of the gun being tested. And that’s it. There’s no screen or cables,because the FX chrono connects via Bluetooth to an app on your smartphone.

The FX radar app is easy to set up. On first opening, it takes you through a quick-start guide and prompts you to register the device for warranty and upgrade access. Consequently, by the time you reach the configuration screen you know exactly what to do.

Begin by selecting your type of shooting (from archery to FAC air) and units of measurement (FPS or m/s), input the projectile weight if an energy reading is preferred, and choose whether you want a voice readout as well as a visual one. Yes, this chrono will actually talk to you! Damn clever, especially for those of us who need glasses but prefer not to wear them when shooting, is the visual readout: bold white figures on a plain black background.

The app also lets you create a unique profile for each gun, copy readings to the clipboard, and connect to instructional videos on FX’s support pages. Profile settings also let you adjust the sensitivity of the chrono. Standard sensitivity (20) worked perfectly for PCPs in .22, whilst a .177 CO2 pistol required the maximum setting (0). This machine also works with .22LR, which makes it have a far greater appeal. However, here the velocity ceiling is 1,300 fps, so isn’t compatible with magnum rimfires (HMR, WMR, WSM) or centrefires.

To get a reading, you need to set the chrono up on a tripod, point it at the target and position the barrel directly above it. It should also be placed level with, or slightly back from the muzzle (5-10 cm seemed to work well). Make sure, too, that the area ahead of the chrono is clear for several meters, as any clutter will prevent the radar picking up your projectile.

The diminutive (10 cm) tripod supplied with the chrono isn’t really up to the job, so I used something taller and more stable. It’s also important to set the gun up on a fixed rest that provides totally consistent alignment with the chrono. What’s really needed though is a bespoke bracket that mounts the chrono to the rifle so that both are always pointing in exactly the same direction. Once correctly configured and positioned, the FX chrono didn’t miss a shot… although I think FX missed a trick in giving the voice readout a bland US accent instead of a sexy Swedish one!

The initial version of the app left other more important things to be desired. The list included: a readout that shows the Max, Min and Average velocities as well as the extreme spread (ES) and standard deviation (SD) of a string; the ability to switch between units of measurement and between muzzle velocityMV) and muzzle energy (ME) without editing the gun profile. Plus, the export of complete profile and session data to the clipboard; and not having the app drop the Bluetooth connection each time you switch profiles, or open another window on your phone, a small thing, but properly annoying!

As it happens, just prior to publication, FX have released an update that offers a more intuitive means of accessing gun profiles, velocity information in all units of measurement, and hurrah; the Max/Min/Av velocity and ES/SD figures. Hopefully, future updates will address the other items on my list, as well as adding an interface for a weather station and ballistic apps, although in this regard I hear that FX are promising to add their own ballistic calculator within the Radar app.

In conclusion, FX deserve a heap of credit for introducing a radar chronograph to the airgun market, and the recent upgrade of the app is an important step in the right direction. But there’s a lot more road left to travel there, and someone also needs to work out a good gun mount. Worldwide, FX are selling the radar chronograph directly through retailers, so mine came from J.S. Ramsbottom rather than from ASI, who distribute the rest of the FX range in the UK.