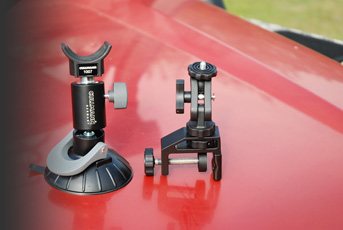 Last month in the Insight (Product) section I looked at the new Cullmann NANOMAX 250 tripod. Though aimed at the photographic community this item has a good cross over as a support for spotting scopes and even as a rifle rest as I discovered.

It then occurred to me that other items might be of equal use and a chat with Dave Morgan at NewPro UK Ltd, who supplied the tripod confirmed that Cullmann also make a rifle rest and a suction mount, both utilising the standard, ¼”, camera, adaptor thread, that can also be found on some shooting lamps. To this he added a window mount from Pedco and I started looking for solutions to problems.

First up the Pedco UltraClamp Kit, this consists of the a heat-treated alloy base (Ultra-Clamp) that will slide over your window and acts like a G-clamp in terms of fixing with a wind-in screw. It will open up to 1.5” so can be used on anything up to that width. On top is a ¼” stud, which the ball & socket adaptor (Ultra-Mount) fits. Made of a tough polymer there’s a tensioning screw on the side that allows the ball assembly to swivel and lock in the position you require.

To this I fitted the Cullmann 1008 Gun Rest again via the standard ¼” thread. This consists of a U-shaped, curved, plastic, moulding lined with rubber that the forend of the rifle rests in.

The whole set up is compact and can be positioned on the top of the window glass as required, with the door’s winding handle used to give course height adjustment. In use the clamp/mount arrangement proved far more practical than shooting off the wing mirror. I set it up in my Land Rover Defender and spent a happy night roaring up and down stubble field lamping rabbits with my Ruger M77/17 All-Weather.

The one thing I would say is that you need to check the width of your rifle’s forend as if it’s over 1.675” then it won’t fit inside the rest. However, it would not take much to get a ¼” thread adaptor from a camera shop and make up your own cradle to suit. Or simply build-up and widen the sides of the 1008. In general it will accept most sporter-style forends though. Given that some lamps come with a ¼” thread then the Pedco UltraClamp Kit would be equally useful for mounting a light or even spotting scope, which also shows that fitting.

Slightly more hi-tech is the Cullmann 1003 Suction Cup Mount. It comes complete with ball & socket head with ¼” thread and works on any smooth surface; glass, plastic metal etc. The head gives 360º traverse and 180º arc and can be locked into position. It can take a maximum load of 3kg (6.6 lbs).

For me this is more a flat mount than one used on vertical surfaces, though it’s man enough to hold a light, scoped-up, rimfire rifle. I found in conjunction with the Cullmann Gun Mount rest it gives a secure and versatile position for shooting off the bonnet and one that you can drive with too. Equally useful you could use it to mount a lamp for this sort of static use and shoot off a bag or similar. The suction system is strong and controlled by an over-lever, nice to is the fact the rubber base has a lift-up tag that breaks the suction for easy removal.

OK I’d be the first to admit that these are primarily photographic accessories, with the exception of the Gun Rest. But as can be seen they do offer cheap and effective solutions to the problems of shooting and lamping from vehicles and even static rests.

Verdict: A bit of lateral thinking shows some cost effective shooting support solutions, so well worth a look