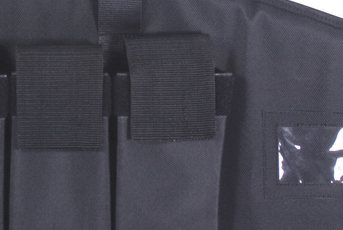 The buzzword of the last five years has to be tactical, but this is one of the times it deserves to be used as the Viper brand is the ‘Tactical Gear/Clothing and Accessories section of Thatchreed Ltd.
I’ve chosen the luggage that suits the shooting fraternity as in my opinion most of this kit has been overlooked, because it mostly comes in black. However, two standout items, the Recon Bag and Tacpac also come in green, initially there’s a lot here to like, delve deeper and there’s plenty more.

A high build quality is maintained throughout, as all kit is manufactured from hard wearing 600D polyester. The bags are well padded, mostly lined and use strong rust-proof zips and Velcro closures on flaps where they’re suited.

The Tactical Weapons Carrier has been featured recently in SS and is possibly the best gun bag in the Viper range. The design will suit hunters, and target shooters alike, likewise its other useful features. External stowage is based on a side-position modular plate that takes any compatible Molle pouches – this nicely leads us to ‘The AK Carrier.’ Named after the legendary assault rifle, the styling of the case has a ‘drop nose’ design with five, external magazine pouches with Velcro flaps. Look at the gunbag through airgun hunter’s eyes and it becomes the perfect item for any reasonable length, buddy bottle fed PCP with a large scope. The side pouches can now be used to hold all manner of fast access kit, such as a spare bottle. Strong carry handles and an adjustable shoulder strap are the carrying options. It measures 39 3/8” long X 13” at the butt section.

The Covert Arms Carrier also sounds very military, but again from an airgun hunter’s point of view it’s ideal for discreetly carrying a take-down rifle. Some supplied with dedicated cases to a degree still look like gunbags - this doesn’t. It’ll hold any takedown currently on the market. It’s fully padded with high density foam for protection, reinforced carry handle (due to the weight) of what you might be ‘covertly carrying’ and there’s an adjustable shoulder strap on the reverse side. It has two internal compartments so items stored can’t rub together to be scratched while in transit.

The Tactical Pistol Carrier will take any CO2 handgun, has protective magazine pockets and the external organiser pocket will easily hold ammo, paper targets and CO2 canisters. It can also swallow any size of air pistol too!

The Recon Bag I’ve tested before but I wish I’d had the TacPac to go with it in my initial meeting. I praised the Recon’s clever storage facilities, extendable design and carrying capacity. Attach the TacPac and you get even more stowage, positioned correctly you hardly notice it’s there. It can be attached or removed in seconds due to the Modular Webbing system.

The main compartment of the Tacpac has a PVC waterproof lining with a mesh divider that splits it into two sections. A large outer zip fastened pocket with two more, one at either end. It has a detachable, adjustable shoulder strap and discreet carry handle for using as a short ‘session’ bag. So I’d say get the Recon then the TacPac and you will be impressed! Both of these also come in green too, which is nice.

FOR - A range of full featured and well made tactical luggage
AGAINST - Not a Lot
VERDICT - Great kit, ignore the military titles and appreciate what is on offer