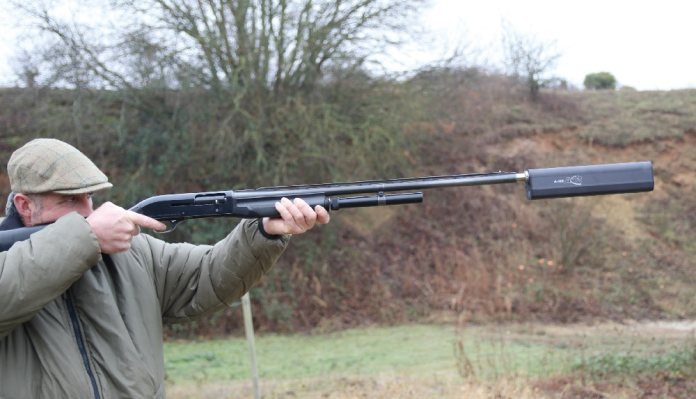 Trying to reduce the noise produced by shotguns has been going on for years, I remember a gamekeeper showing me a DIY, moderated .410 that he’d taken from a poacher. It was a single barrel folder, which had a series of holes drilled the entire length of the barrel, sleeved with steel tube and the void between filled with wire wool. When fired it made no more noise than a stick cracking, and it was an easy matter to replace the filling when it got noisy! On test, is the latest concept from A-TEC; the A12 is primarily designed to fit onto the muzzle of semi-auto or pump action guns.

The A-TEC is attached by means of a special choke (1/2/modified), and you need to specify what it will be fitted to and the appropriate version will be supplied. All you have to do is remove the gun’s normal choke and screw in the new one. Then screw the can on and align it so the main body sits at 6 o’clock, then tighten the locking nut to secure it (spanner supplied). So simple even I could not mess it up, well maybe!

The moderator is not small, adding an extra 12” to the length, so as you can imagine and as the pictures show it does look a little daft on the 28” barrel of my Benelli M1. However, it only weighs 1lb 4oz, so is quite manageable, I reckon on a 24” barrel it would handle quite well, considering the extra length. It is evident that some serious thought has gone in to keeping weight to a minimum, as it’s mainly constructed from a polymer rather than metal. The main part of the chamber is below the ported tube section that the shot travels along.

Up until now, the only shotguns I have seen moderated have been pump actions, single shots or over and unders, all of which have been dedicated builds. So, the A12 means standard, pumps and semi-autos can now be easily moderated. My M1 is cartridge-fussy, especially with 1oz loads, so I was very pleased when it cycled with no problems. I used 30 and 32-gram loads for the test, but nonetheless it still functioned perfectly. It’s recommended that fibre wads are used and definitely not slug!

The function of a sound moderator is to reduce noise and some only really make a significant difference if sub-sonic cartridges are used. I did not have any subs so could not test whether the M1 would work with these low loads. But using standard loads there was significant reduction in the signature, to the point no hearing protection was needed, so the A12 does what it says on the box. They are not inexpensive, but there are definitely some situations when the professional pest controller would find it useful. For a secion-2 (shotgun) no permission is required, but a variation is if you have a Section-1 gun.