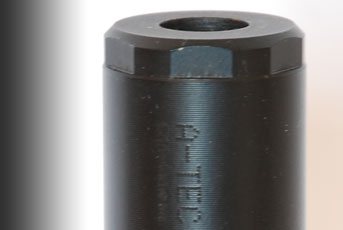 The hot news in the world of moderators is that Peter Jackson (Jackson Rifles) who imports BR Tuote, SAK and Ase Utra has just picked up the agency for A-TEC of Norway. This makes Jackson Rifles probably the biggest distributor offering the largest choice of suppressors in the UK.

Last year I was sent A-TEC’s latest, muzzle-mounted design the CMM-8 (Compact, Muzzle Mounted). The idea was that the individual baffle sections screwed off and in so doing could be adjusted to suit various calibres. This to a degree worked with 222/223 Rem, but once you hit 22-250 and larger you really needed all the baffles…

The CMM-4, which is for rimfire calibres, is made from hard anodised, aluminium alloy. The build goes for a forward expansion chamber with four baffles in front. The style is cup-shaped with a 0.274” aperture and a 90° step, which forces the gasses to turn a corner every time they enter/exit subsequent sections.

Measuring 5.5 x 1.2” and weighing 3.5oz the CMM-4 does not feel or look that different from other market leaders. For me the main question is how will it handle 17HMR? As 22LR and even 22WMR is not such an issue, but the higher speed/noise of the 17 really sorts the men from the boys.

They say you should never assume anything… and in the case of the CMM-4 that was certainly the case… Experience with the fullbore version showed you could remove, replace baffles, trying this with the rimfire got me nowhere. I had ‘assumed’ that the modular build would allow me to use it with less baffles on a 22 LR, with the ability to add five or six to cope with the HMR. Yes I could have got it apart, but a deal of brute force would have been involved…

Instead I asked Pete Jackson about the lack of ease of disassembly and this is what he said: “Yes, the A-TEC is a modular assembly, but this is primarily for ease of manufacture, not so that the end-user can take it apart. The modules are done up quite tightly to prevent them coming apart inadvertently. Modules can be added or removed by a competent person with the correct tools, but this is not the primary design intent. Adding more than the standard four does not significantly improve the performance on a rimfire rifle. On a .22 pistol, there is measurable improvement up to six modules, but the difference between four and six may not be audible to all users. We do not recommend that end-users disassemble any silencer, especially a rimfire. Good silencers are designed to work best with a certain amount of internal fouling and the hazard posed by lead dust in a rimfire outweighs any possible benefit from even occasional disassembly and cleaning.”

Testing using mine and a friend’s Mk 1 ears showed that the CMM was about on par with the SAK though not as quite as the SK11, but there was little in it. However, it was brand new and generally all cans seem to do better after a few hundred rounds. For 17HMR I would have liked to be able to add one or two more baffles and I will send it back to Pete to get him to do so, as I reckon that might make more of a difference; we shall see!

The real problem we have with moderator testing is data gathered by the proper machinery, which must be considered irrefutable, when compared to what we actually hear, as our ears are not 100% exact. However, out in the field where it really matters that’s all we and our quarry has to use…

Despite Pete’s comments, which I do not dispute; it does seem a less than ideal selling point that a modular design such as the CMM cannot be fully utilised by the end user, unless it’s done by a ‘competent person’. Surely the ability to add/subtract baffles would give the design a flexibility not offered by fixed builds?

We Reckon:
Modular maybe…
Worth a look
Effective as other top brands