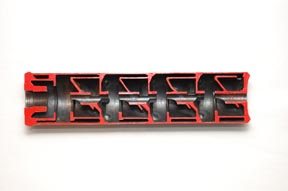 Like most shooters of my age - full bore moderators are a reasonably new concept, as many years ago the choice was poor and more importantly getting one was not that easy. As we are all aware this situation has changed and by the time I started considering them again, the good old over-barrel (Reflex) design came along from BR Tuote and other companies. To my mind this build was preferable to the great, long muzzle-mounted cans, like the old Vaimco or L.E.I. Shorter, albeit fatter, the Reflex cut down outboard length considerably, improved handling drastically and gave a very secure mount due to the fact there was an over-barrel bush at the rear, which really improved stability and strength.

Having got one for my Steyr Scout and another for my AR15, I considered the Reflex design the benchmark. However there are other ways to skin a cat, as I was to discover. In terms of an alternative you had the Ase Utra Jet-Z, which was a muzzle-mounted design, but much smaller than the Vaimco or L.E.I. That apparently gave equal performance to say a comparable BR Tuote design. A number of my friends had these and extolled their virtues, as they were smaller and lighter, but I was not convinced simply due to the single mounting point. I also thought that the lack of an expansion chamber would make it sound louder too…

My first experience of the Jet-Z Compact came when I borrowed an example off the importers for a look. I fitted it to my .223 AR15 in place of my favoured BR Tuote T8 AR and what a difference it made. Apart from adding a bit more length to the rifle, it was a lot slimmer and in terms of noise reduction very different. Made from carbon steel it weighs 550-grams and measures 40 x 180mm with 150mm adding to the overall gun length.

To my ears the Reflex always seemed to have a long, drawn-out ‘bewap’ signature. Whereas as the Compact sounded shorter yet with a good moderation effect and not the slightest bit of what I call ear sting. Looking at a sectioned Jet-Z shows a labyrinth of baffles in what can only be described as a Z-shape. This obviously works and without an expansion chamber either. The Compact is rated for a reduction of 29-32 Db A and unlike the thin steel B R Tuote is built like a tank and offers a two year warranty, but frankly I feel it would last a lifetime, if properly maintained.

Since then Ase Utra brought out the S5, which is another small and bijou design that’s even shorter, though wider than the Compact. All stainless steel it measures 45 x 122 mm with a 112mm length extension and weighs 580-grams. Though I have not seen the innards it seems to give the same sort of short but effective signature and is rated at 24-27Db A. It is built even tougher than the Compact, so should offer a near unlimited life span if properly cleaned.

Both the S5 and Compact are available in a number of models as to what calibre they can handle, I have only quoted here the ones I have tested. Like any moddy other useful benefits include a reduction in felt recoil, flash suppression and from my experience an increase in accuracy/consistency. The Compact on my AR15 also ups the velocity by around 70 fps too. Recently I tested an S5 on a 308 Winchester (Sauer 202) and a Compact on a 30-06 (Mauser M 03).

On paper the S5 is slightly less efficient, but to my ear the two cans did not sound really that different and did the job equally well. Visually - and this may sound daft - the S5 is a bit homely looking; especially in its silver finish and I prefer the longer/slimmer and darker look of the Compact. I thought it was just me, but it would appear that this is quiet a common view.

The single point of contact issue I have with muzzle-mounted designs in general has pretty much been dispelled by using both these cans over the last few month. Though there is still a tiny nagging doubt and worry about bashing it. But a look at the way they fit on shows there is really not a problem with security. I have also been using a .25” bore S5 on my M 03’s 223 barrel and I think by comparison to a full size T8 in the same bore it’s not quite as efficient. As the T8’s large expansion chamber really seems to handle that smaller volume of gas produced in about the most efficient way possible.

If you want something smaller and tough, when compared to the larger Reflex-type designs, with as good moderation, then I would suggest you see what Ase Utra Oy has to offer…