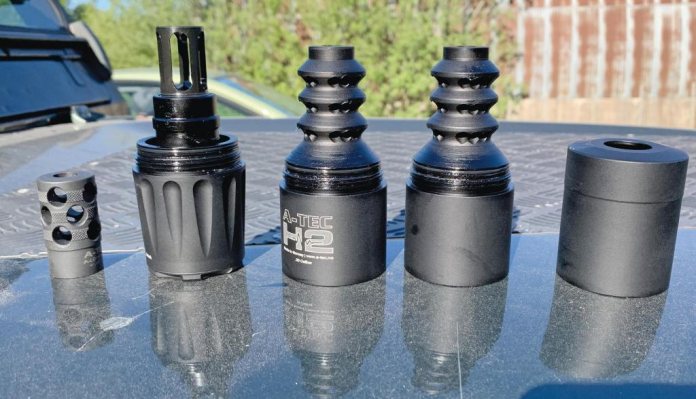 Since I started using fullbore moderators and writing them up, compared to today, it was plain to see that there has been some serious evolution. At one time the all-steel, BR-Tuote (T8) Reflex was ‘the go-to can’ in the UK, importers Jackson Rifles must have shifted a lot of product and established themselves as the experts in the field. Over the years they have expanded their portfolio with other brands, one of which is A-TEC who have some innovative ideas.

In 2019 they launched their new H2 (Hertz Version 2) Reflex (over barrel) series, that replaces all earlier Hertz models. Typically, technology has been improved and it is highly effective on the first round pop/cold barrel shot. The build is modular, as in you can add or remove individual baffle units (modules) to suit, size, weight, and effect, depending on the model. There are two options both offering from one to three modules; H2 is the standard diameter at 49.4mm and the Mega H2 fatter at 64mm, so will cope with larger calibres producing more gas.

Of equal interest and as far as I know unique, is the way it mounts. Depending on your needs you can have a standard, old fashioned integral thread in the moddy that matches the one on the muzzle. Or, and I really like this; the A-LOCK Mini system, that offers a quick change facility, via an interrupted thread muzzle adaptor, as we shall see!

On test is the standard H2. It’s in four sections; the rear shows a small expansion chamber, at the top is what could be described as a slotted (cage-type) flash hider, not much use on the inside of a moddy, perhaps? I reckon its real function is to start disrupting and decelerating the gas flow to improve moderation effect.

The twin modules are quite complex, with an outward wine glass shape, the bowl section screws back onto the rear unit and increases the capacity of the primary expansion chamber. The stem has three slim, radial flanges that are multiple drilled 360º with ports to allow gas through into the second module. Finally, there’s a long nose cap that screws over the top so giving another expansion chamber. Gases are further slowed as they have to pass through the ports then back again to exit in each section.

I’m quoting here from A-TEC’s data on the H2 range as to size, weight, and moderation effect.

I have no method of measuring DBC output apart from my Mk1 ear, which is like a go/no-go gauge; either you don’t get that sharp spike of noise on your ear when firing, or you do! I used my 22” 6.5 Creedmoor custom with Norma’s 130-grain Match BTHP Golden Target ammunition. They quote a MV of 2851 fps, the shorter, 22” tube on my gun lops about 100 fps off that figure. With two modules, moderation was effective and comfortable, however removing one took it past my comfort zone, which did not surprise me. Given the minimal increase in length and weight, I’d opt for three. However, and overall, the H2 impressed me as an effective and practical design.

The H2 uses a fixed/integral thread and simply winds on as usual. Of more interest is A-TEC’s, optional, A-LOCK Mini system that gives a near-instant ON/OFF ability. It uses an interrupted thread, which is much like a Wellin, modified screw breech, found on British BL (breech-loading) artillery pieces. The thread form is machined out to leave three vertical sections inside the moddy. A top hat adaptor screws onto the muzzle of the rifle and offers the same external form to match the inside. It needs Loctiting in place, a fitting tool is available if not essential!

To fit, drop the can on and let it bottom out then a quick 60º twist locks it securely in place, it’s as easy as that. This allows the use of one moderator on several rifles, given calibre/bore size. A-TEC supply a plastic thread protector if you want to go un-moderated. Optional and extra is a radial muzzle brake. I like the idea of a QD moddy that will make my rifle mission-specific. Equally, when I go boar hunting in Europe I never bother with a moderator, so the ability to leave it behind and also fit a muzzle brake easily is great.

With the correct amount of modules, the H2 is an effective can, however, my major concern was does it come loose during firing? This is a common occurrence on some screw-on types and if this goes unnoticed; will affect the point of impact. To its credit the A-Lock Mini system worked effectively, staying tight on the muzzle, even after longer shot strings, but still coming off fast and easily with a short, 60º turn.