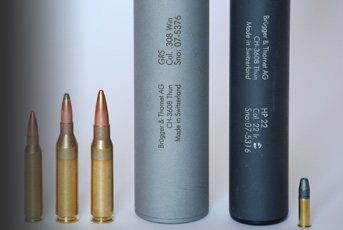 Brügger & Thomet is a Swiss engineering company who according to the importers; have or can create solutions to all problems and requests. A lot of this is aimed at the military and police markets with items like firearms, mounting systems and moderators. However, they also offer a small sporting range of firearms suppressors too.

I was sent three fullbore and one rimfire unit. The former are offered in 223, 243 and 308, which seems to be the largest calibre they cater for in this market. Made of heavy gauge stainless steel they show a grey, sand-blasted finish and are of the muzzle-mounted design with a rear, stabilising collar as is the Ase Utra S5 series.

B&T only list 223 and 308 models but the 243 is similar to the latter as to make no difference, whereas the 223 is slightly smaller and lighter. There’s no diagram on their website as to the style of the baffle stack, but inspection with a torch appears to show a simple, multi-baffle layout with no expansion chamber.

Typically you can have any thread you like; these came in ½ x 20” UNF and cut exactly to the specification and so a tad tight on the rifles I used, therefore I had to get them opened up with a tap. B&T have been informed of this and now cut to a more British tolerance.

The 223 is 1.49 x 5.32 and weighs 11oz, so quite light and adds 4.5” to the overall length, suppression value is quoted at 27 dB a. The 308 is 1.49 x 7.63” with an overhang of 7” and weighs 15 oz. while the dB a is 25. In use with standard 223 Rem and 308 Win loads (55 and 150-grains) I thought the B&Ts sounded maybe a tad loader than the Ase Utra CQB Compact I compared them too. But still well in the comfort zone. However, this is subjective as only proper measuring equipment will tell, as often more than one ear will hear the same sound differently. That aside the solid and all-stainless build means a long and relatively carefree life, as corrosion and gas cutting is not that big an issue.

The rimfire can is frankly on par with other units of its type in terms of performance. B&T don’t quote a noise reduction figure, feed it sub-sonics and it’s as quiet as any other and it gets louder as the velocity goes up, as do they all. It weighs 6.6oz and measures 1.18 x 8.16”. The build goes for an alloy outer with steel baffles and the exterior finish is Hardcoat anodized & QPQ. Muzzle-mounted it comes as standard with a ½” x 20 UNF thread and extends the rifle by 7.6”.

The B&T range is well made, as effective as similar makes and doubtless long lasting, but the prices are a little on the high side compared to other market leaders.

For: Quality product that should last a lifetime
Against: No reflex (over barrel) option
Verdict: Well made, effective but a little expensive by comparison