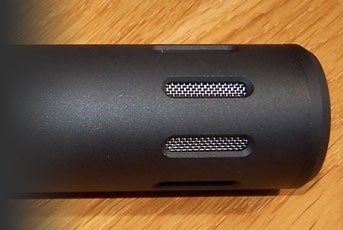 During a recent visit to Ben Taylor’s premises, I was lucky to be able to meet Andrew Huggett, who’d dropped by to show Ben the air rifle moderator he’d been working on. To say I was impressed is a massive understatement, as it was simply stunning. I told Andrew that if it were as quiet as it was good looking, he’d be onto a winner.

I recently received a prototype for evaluation, and if anything, it’s even better than I remembered. The overall look is very stylish, with an alloy body tube 6 ¾” long and 1 ½” in diameter. Overall size is therefore similar to many other moderators, but it’s the look of the thing that sets it apart. There are eight 2 ½” long shallow flutes along the exit end of the tube, with eight slots ¾” long near the muzzle end. These slots reveal stainless steel mesh that is part of the sound deadening system. The look is therefore very ‘tactical’ and at 7 ounces, it won’t un-balance whatever it is fitted to.

One end is machined for the industry standard ½” UNF thread, and the other is engraved with ‘Huggett’ and ‘BTAS’. Once the exit end cap is removed, the internals can be seen, which consist of two washers dividing the interior into three chambers. Sound absorbing wadding is wrapped around ventilated machined alloy tubes, and a very clever feature is the incorporation of the stainless steel mesh mentioned before, this stops the wadding being damaged by the air blast as it travels through the moderator. It also looks very good, being visible through the slots mentioned earlier.

The internal parts are obviously of the highest standard, but these are hidden from view, so it’s the exterior that is the most important thing to the potential purchaser. The components appear to have been bead blasted prior to anodising, resulting in a matt, non-glare finish. The machined slots and flutes are absolutely perfect, with no machining marks or flaws; this really is precision engineering, which it should be, as Andrew owns a CNC machine shop and works to incredible tolerances.

As you can see, I’m very impressed by this product, but the proof of any pudding is in the eating, so how does it perform? Well, the answer is very well. I tried the Huggett silencer on a variety of pre-charged pneumatic air rifles and pistols, in both .177 and .22, and sound reduction was very good indeed. I think we have reached the pinnacle as far as quietening air guns is concerned, without resorting to huge unwieldy affairs, and this new model is equal to, or better than, anything currently available. It is also the best looking as far as I’m concerned. Looks count for a lot, so this moderator’s impressive performance, combined with its stylish appearance should make it a top seller. There is also a version that slips over non-threaded barrels, with the unit being secured by a grub screw. Andrew has recently informed me that he now has end caps that fit the new Air Arms S510 rifle. I’ve a feeling we’ll be seeing more Huggett silencers in the future, and the next logical step is one designed for rimfire rifles.

The Huggett Silencer is available exclusively from BTAS for £75. This is comparatively expensive for an air rifle moderator, but quality like this is never going to be cheap, and here you certainly get what you pay for.