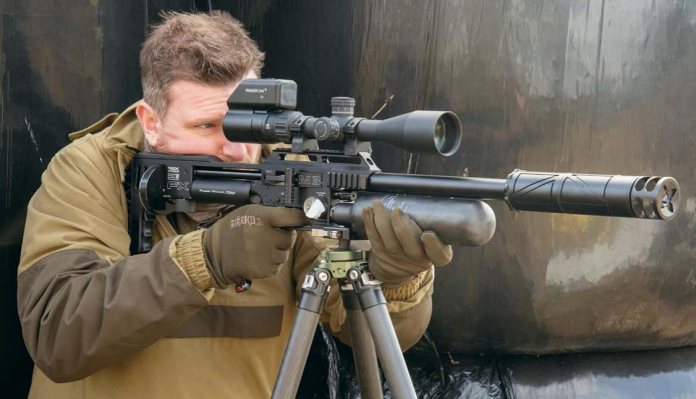 Airguns are usually already pretty quiet, but more power with FAC-rated guns, especially with the ever-increasing calibres, means there is a lot more air to slow down and quieten from the latest models. DonnyFL, already has a huge range of smaller moderators, but this whopper is not just quiet from the start, it is a modular system with additional components allowing it to physically improve on what it does.

As standard, the mod arrives at 4.25 x 2” in length and diameter weighing 6.7 oz. It’s marked up clearly as suitable for ‘airguns-only’. From the box, it’s .30 cal but three additional air strippers are supplied that screw in and reduce the muzzle for .25, .22 or .177” calibres. Materials are 6061 T6 aluminium, with internal mesh to baffle air movement and deaden resonance.

An additional FAT BOY 2.0 extender tube is available that after swapping the endcaps, screws in position adding another 3” of matt black anodised volume to further suppress noise. There aren’t any additional baffles within, except for the endplates that encapsulate the stable volume, but it does take off a teeny bit more report and deadens the slight ‘ting resonance’ from the barrel of this specific rifle, especially in .30 cal running nearly 90 ft-lbs.

Is to add the FAT BOY 2.0 muzzle brake. This fits on instead of the air strippers and like any brake, shows radial vents (eight here) to direct air perpendicularly away from the bore line to cut recoil. I think we can all agree, recoil is not really a factor here and personally, it seems a little bit wishful thinking, but if looks could kill (they certainly sell airguns) it may be the extra step you want. In terms of noise reduction, the air strippers can be added to the brake’s 8mm orifice, but since this is now spaced beyond the lateral ports, there is unlikely going to be any effect and to my ears, wasn’t.

Lives up to its name

All three components combined add up to 8 7/8 x 2” length/diameter and an overall weight of a whopping 14 oz. including an air stripper. I used the Fatboy on an FX Impact M3 FAC with appropriate ½”x20 thread and found it suited the rifle well for looks. Manufacturing standards are impeccable, everything butts up straight when threaded together and nips tight easily but I’d suggest adding some copper slip to the threads if you want to disassemble it at any future date. Fatboy and extender are fairly easy to separate, but the brake is less easily gripped and unscrews the liner, instead of releasing itself, just make sure all is tight when shooting to avoid resonance issues, possible misalignment, and pellet strike. The external flutes add grip when taking the mod on or off the rifle and almost look like a Union Jack in shape when aligned. Nothing has damaged the deep, lustrous hard anodising and it’s going to remain that way for years. It looks good and may suit high power guns, but a lot of dosh for an airgun can!