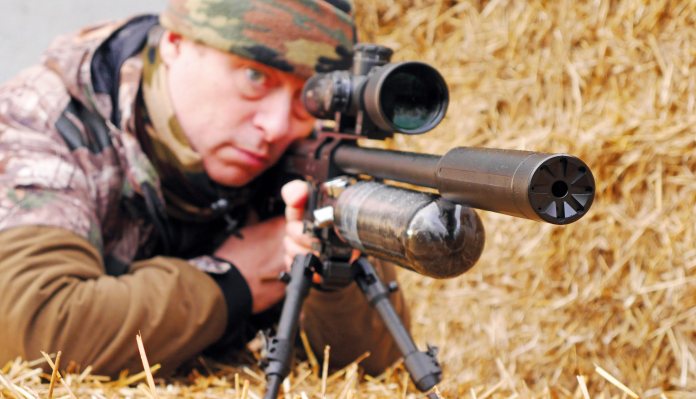 With the possible exception of a .22LR, no gun-type benefits from a good moderator more than a PCP air rifle, especially when it’s set to run at FAC power levels. There are lots of effective and inexpensive options on the market, so what’s the deal with DonnyFL? And are they worth the extra cash?

The range offers three external diameters (1.22”, 1.6”, 2”) and six different lengths (4.24”, 5”, 6.25”, 7”, 8” and 10.5”) so you can select a sleek Koi for an almost seamless extension to an FX barrel shroud, plump for a shortfat Tatsu, or go large on a mighty Shogun. There’s also a compact 1.22” x 5” Tanto, a chunky 2” x 6.25” Ronin and a massive 2” x 10.5” Emperor. Each will give your gun a distinctive look, complete with discreetly fluted tubes and the marque’s signature star-shaped detailing on the muzzle cap. The range of models means there’s bound to be one that hits the sweet-spot in the Venn diagram of noise, mass and size for how you want it to sound, heft and handle.

It’s hard to overstate the feeling of quality you get from a DonnyFL moderator. The CNC-machined aluminium alloy build is super-precise, and the sand-blasted and anodised finish is perfectly even and highly resistant to wear. Particularly expressive of the care taken over each component is the fluting of the outer tube. It looks great, but it isn’t just for show, since the edges give you plenty of grip when attaching or removing the moderator, and the shallowness of the flutes adds stiffness and allows for a lighter tube.

Internally, all the Donnys feature a ‘monocore’ diffuser that is integral with the end cap to ensure perfect, life-long concentricity. Comprising of a series of well-spaced baffles with broad oblong cutaways between them, it is wrapped in a layer of fine metal gauze, which is in turn enclosed in a double wrap of dense black felt. At each end of the diffuser is an O-ring that ensures a snug, gas-tight fit, while two sets of pin-holes are bored around the circumference of the tube and discreetly sited at the tips of the starshaped array of channels in the muzzle cap, to vent any over-pressure. Thus, the design provides 5 degrees of suppression: baffles, expansion chambers, gauze, felt and of course the tube itself. The result is a moderator that is both light and effective, as well as serviceable, should that ever be necessary, since replacement felt and O-ring kits are also available.

The build is modular, so for a given diameter, you can purchase additional end caps to fit rifles cut with threads other than the ½” x 20 UNF variety supplied as standard. You can even get tapered end caps that give a smooth transition with pencil barrels.

DonnyFL’s UK distributors, the Sportsman Gun Centre, kindly sent me three models to try out: a Koi, a Tatsu and a Shogun, all in .22-.25 calibre. This is one of three standard bore sizes. There’s another for .177-.22 and a third for .25-.30. The 2” OD Ronin and Emperor models also come in .357 and .45-.50 flavours for the kind of big-bore behemoths popular across the Pond. I mounted each moderator successively on a .177 Daystate Wolverine at 11.8 ft/lbs, a .22 Daystate Mk4 at 28 ft/lbs, a .22 FX Impact Sniper at 50 ft/ lbs and a .25 RTI Prophet at 52ft/lbs. In contrast, I also ran the Daystates with Airstream carbon fibre moderators and the FX with its factory, baffle-less moderator. No alternative moderator was available to use with the RTI.

After trying all these moderators out on my own, I felt they all did a fine job on their respective rifles, but couldn’t perceive any special hush-factor when fitting the DonnyFLs to the lower-powered Daystates, or any real difference between the Donnies and the FX factory mod on the Impact, though the FX Impact was perceptibly louder with Airstream fitted.

This surprised me, but also unexpected – and more interesting- was the difference in point-of-impact and group size when shooting the FX Impact with the different moderators. Evidently, changing the mass at the end of the FX Impact Sniper’s unsupported 700mm barrel affects its harmonics. So, if you decide to fit a smart new DonnyFL, you’ll want to re-tune as well as re-zero to get your groups tight as well as centred. That said, when I set about tuning the rifle with the big Shogun I selected for it, I was able to achieve groups that were not just smaller, but also more consistently small than with the original FX factory moderator.

If the Shogun is indeed doing more for accuracy than the factory unit, it is perhaps because the latter is a baffle-less design, whereas the baffles in the DonnyFL have the potential to work as air-strippers, with each baffle creating a clean air-space for the pellet to move into. It’s true there’s less space around the pellet path in the Shogun, but as the open design of the diffuser means the difference is mostly taken up with absorbent felt, there is presumably no additional blow-back as a result.

When used on the FAC Daystate Mk4, the Koi and Airstream were similar, but sound suppression was better with the Tatsu and even more so with the Shogun. This time there was no significant POI shift, probably due to the braced barrel design of the Mk4, but again a reduction in the number of outliers reduced group size.

On the .177 12 ft/lbs Wolverine, all the moderators tested performed similarly well, sound-wise, perhaps due to a combination of being slightly over-bored for the smaller calibre and to the lower volume of air discharged behind the pellet. Owing to the Wolverine’s barrel being free-floating, there was some POI shift with the Tatsu and the Shogun fitted, but the shorter barrel meant that this was less pronounced than with the Impact. This time, though, I couldn’t measure any difference in group size because there were hardly any outliers to start with.

So what do I reckon? Firstly, that you probably won’t find a quieter moderator. Secondly, for regular 12 ft/lbs or sub-30 ft/lbs FAC guns, you don’t need to spend DonnyFL money to achieve the same level of suppression. Thirdly, that the Shogun really comes into its own as power and calibre go up. Fourthly, that fitting a DonnyFL moderator is likely to tighten your groups and, last but not least, that the quality of design and manufacture they convey every time you get your rifle out makes them a joy to own as well as a pleasure to use.