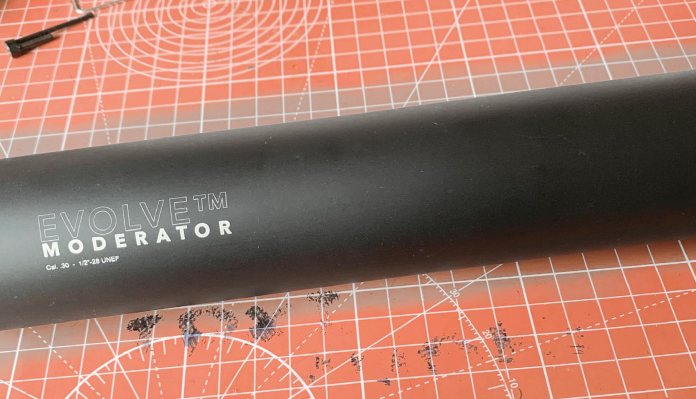 The Evolve is a reasonably new addition from Raytrade UK Ltd. the Remington, Chiappa and Marlin importer and distributor. Made of high strength, lightweight aluminium alloy, it follows the reflex-type build. Here, the design uses a rear-mounted expansion chamber that wraps around the barrel, with the baffle stack in front of the muzzle. It gives less outboard length than a comparable, muzzlemounted type, which means a shorter and handier package, which is always an issue with using and selecting a moderator, no matter what the calibre. At the rear, is a removable plastic disc that can be bored out to offer more stability, if required. However, initial impressions were very good, certainly the price, which is just a pound shy of £200, that by today’s standards makes the EVOLVE range almost a third cheaper than comparable makes. Research shows that it was specifically designed by a Norwegian manufacturer for the UK market. And if you’re paying just £200 for a functional, fullbore reflex can that’s a bargain in anyone’s language! Dimensions are 230mm long, with a 43mm diameter and it weighs 380-grams, which is well under a pound. Calibre choice goes from .17” right up to 300 Win Mag and offers the following thread forms: M 14 x1, M15 x1, M18x1 (Metric), Imperial ½ x 20” UNF, ½ x 28” UNEF and 5/8 x 24” UNF. Noise suppresion effect using a 308 Winchester load is a quoted 30 db. Tests showed it worked satisfactorily, giving effective moderation with no hearing spikes. Priced at £199, it represents excellent value for money.